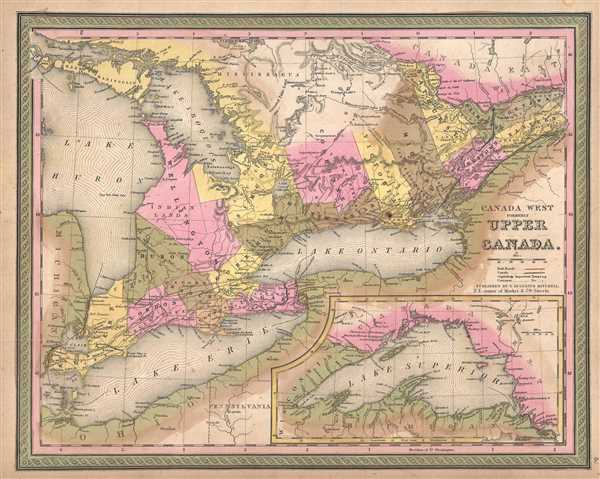 This is an 1850 Samuel Augustus Mitchell map of the Canadian province of Ontario, or Canada West. Centered on Lake Ontario, this map depicts from Lake Erie, Detroit, Michigan and Lake Huron to Quebec. Lake Huron and Lake Ontario are labeled, and Georgian Bay is labeled Lake Iroquois. Numerous towns and villages are noted, including Buffalo, New York. Niagara Falls is also labeled. In the lower right corner, an inset map of Lake Superior is also illustrated.

Canadian provinces and territories were under British and French control from the 16th century, until France gave up its claims in the Treaty of Paris in 1763. Canada would remain a collection of British colonies until its confederation in 1867, when the British Province of Canada was divided into Quebec and Ontario and the British colonies of New Brunswick and Nova Scotia were incorporated as Canadian provinces.

Mitchell published this chart in his atlas from 1846 to the late 1850s before discontinuing the series and selling his map plates to DeSilver. This map was issued in the 1850 edition of the New Universal Atlas.