1860 Valentine Map of the Canal on Canal Street, New York 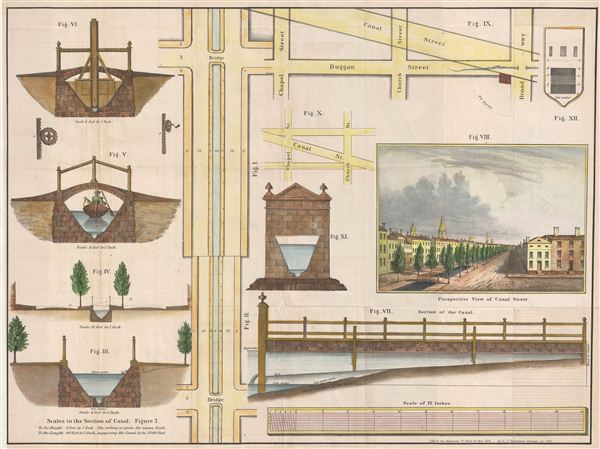 1860 Valentine Map of the Canal on Canal Street, New York

An unusual 1860 map illustrating the evolution of New York City's Canal Street. Canal Street, located in lower Manhattan, takes its name from a canal that was constructed in the early 19th century to drain the Collect Pond into the Hudson River. The Collect, as it is generally known, was a large pond located in lower Manhattan. In the 18th century it was a popular recreation area, however, by the early 19th century tanners, butchers, and others began using the Collect to dump their refuse, leading to problems with disease and pollution. In 1811 city attempted to drain the Collect and fill in the depression. Once the pond was filled the canal itself was also filled. This unfortunately led to more serious problems. Underground springs, lacking an outlet, undermined buildings all along the eastern portion of Canal Street, forcing affluent residents to flee the area, now once again plagued with disease. By the mid-19th century this area had degraded into the 'Five Points,' one of the world's most infamous slums and the subject of the Hollywood film, 'Gangs of New York.' This prospective of Canal Street was issued in 1860, at the height of the 'Five Points' mayhem and just one year before the events depicted in 'Gangs of New York.' Drawn by George Hayward, of 171 Pearl Street for publication in D. T. Valentine's Manual.

Valentine, D. T., Valentine's Manual of the Corporation of the City of New York, (New York) 1860.