1875 Imray Blueback Nautical Chart or Map of the Carnary Islands 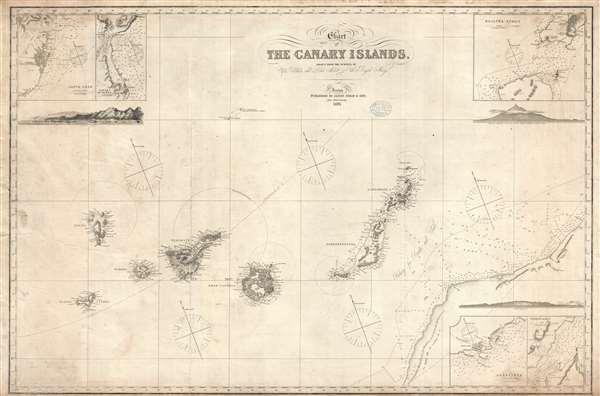 1875 Imray Blueback Nautical Chart or Map of the Carnary Islands

Chart of the Canary Islands from Vidal's survyes.

An elegant 1875 James Imray nautical chart or map of the Canary Islands. This map was originally published by Imray in 1860, the present example being a later edition, based upon the important surveys of Captain Alexander Thomas Emeric Vidal of the Royal Navy. Centered on Gran Canaria, the map extends to cover all of the islands as well as parts of the adjacent west African coast. Insets details Santa Cruz (Tenerife), Puerto da la Luz (Las Palmas, Gran Canaria), Arreciffe (Arrecife, Lanzarote), the Strait of Rio, and Bocayna Strait. Profiles detail Tenerife, Grand Canaria, and Santa Cruz.

Vidal and Arlett completed a series of surveys of the African Coast, Madeira, and Canary Islands in from 1838, but specifically around the Canary Islands in 1844. Before Vidal, this area was poorly mapped and a haven for slavers and pirates. Vidal's achievement in surveying the region was praised by the Secretary of the Royal Geographical Society

This tedious undertaking is drawing to a close, and will then be of equal utility to the fair traders and the anti-slavery cruisers. It is fortunately in the hands of such a man as Captain Vidal, R.N., who has steadily devoted himself during a long period of ill-health, to complete this unpopular work, and to connect with it a minute examination of the Canary Islands.

His work laid the groundwork for all subsequent maps of the Canary Islands.

This map appears surprisingly rare. We have identified advertisements for it in Imray's catalog, but no other examples either in institutional or private collections. Nor are there available sales records for this map in the last 30 years. This map is owned jointly by Geographicus and Vetus Carta Maps.

Very good. Some creasing. Backed on blue paper.
Looking for a high-resolution scan of this?