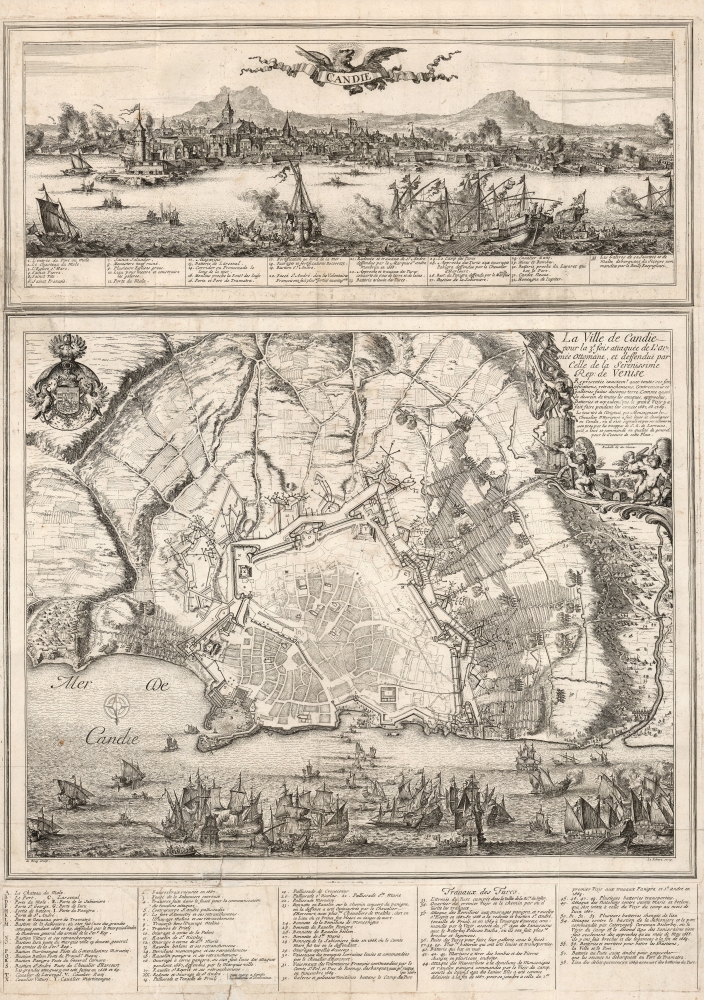 This is an extremely rare, likely unique, separately published 1668 broadsheet plan of the port of Heraklion / Candia, Crete, incorporating a striking panoramic view of the city. This broadsheet illustrates Venetian-controlled Heraklion during the final years of its 21-year-long Ottoman siege. It was privately commissioned and engraved to lionize the efforts of French nobleman Alphonse-Louis, Chevalier d’Harcourt, who perceived himself not only a defender of Crete, but as a latter-day crusader defending Christianity itself.

The panorama was etched by the famous Dutch etcher Romeyn De Hooghe, while Valentin Le Fébure executed the lettering, and possibly the plan itself. While all other surviving examples of this work (we find 5) bear the imprint of the Paris map publisher Antoine De Fer, this example lacks it - the suggestion being that this a privately published issue that was subsequently acquired and commercialized by the enterprising De Fer. This likely represents the earliest issue of the broadsheet prior its production for sale. Since the earliest instances of De Fer's imprint on this work bore the date 1669, the window of time between the production of these plates and the addition of De Fer's mark is narrow indeed. This sheet may be a unique survival.

In the plan's cartouche, it is stated that the source of the plan - was 'taken from the original that Monseigneur le Chevalier d'Harcourt had designed and drawn in Candia, where he distinguished himself and by his actions in 1668 and 69'. While it is certainly possible that the Chevalier himself did draw the plan from which this work is composed, it must be noted that in addition to the imprints of the two artists, the central plan also includes the inconspicuous 'D. B. del.' and 'Par le Sr. du B..' These are probably the initials of Sebastian de Pontault, Sieur de Beaulieu (1612 - 1674), the progenitor of military topography, whose atlas of Mediterranean fortifications was based almost entirely on firsthand survey. It is entirely credible that he was among the French contingent defending Candia, and that the meticulous work underlying the engraved plan derived from his work - in spite of its being overtly attributed here to the Chevalier d'Harcourt.

If he did not indeed draw it himself, this broadsheet was certainly produced on behalf of Alphonse-Louis, Chevalier d’Harcourt (1644 - 1684), whose arms decorate the upper left corner of the central plan. D'Harcourt was a French noble and soldier who had raised a force from the French Lorraine and led them between 1667 and 1669 in the western effort to defend Candia during the interminable Ottoman siege. He also commanded one of the galleys in the Mediterranean fighting to break the siege. Throughout, the locations keyed in the legends are points specific to d'Harcourt's roles in the campaign in 1668 - 1669.

The production of such broadsheets as this were sometimes produced by, or for, noble patrons as familial/political propaganda. The participation of the highly regarded artists De Hooghe and Le Fébure suggests that d'Harcourt was sparing no expense in glorifying his martial exploits in the defense not only of Crete, but by extension the Christian world.

The Ottoman siege of Venetian-ruled Candia was the second longest such battle in history, lasting twenty-one years. Beginning in 1648, a massive Ottoman army laid siege to the city, cutting off its water supply and constructing a sprawling earthwork encroaching on its walls (shown here). They then bombarded the city for the subsequent sixteen years. The Venetians in turn blockaded the Dardanelles to prevent Ottoman resupply and reinforcement, leading to a series of naval battles. Over the course of the siege, forces from all over Europe and the Ottoman Empire were drawn into the fight, including the French, who sent soldiers to reinforce the Venetians throughout the 1660s. In 1669 Francois de Beaufort, son of the Duc de Vendôme, led a major effort to break the siege. Beaufort's campaign was a disaster: his flagship La Thérèse was destroyed in an accidental magazine explosion on June 24, and he himself was killed during a night sortie. Utterly demoralized by these blows, the French withdrew from Candia, leaving the Venetians no choice but to surrender the city in September 1669. Although the siege ended with the Ottoman capture of the city it was a Pyrrhic victory. The expense of the siege in men, money, and material was ruinous, and historians consider it to have contributed significantly to the subsequent decline of the Ottoman Empire.

Candia Before its Fall

The present work was engraved after 1668 but prior to the summer of 1669. This we deduce by the absence of any reference to Beaufort's failed attempt to lift the siege, neither the loss of La Thérèse, nor Beaufort's own death. The action in both the view and the plan focuses mainly on the events of the previous year or two, during the period in which the Chevalier d’Harcourt fought in the defense of the city. The panoramic view of Candia at top presents the city as viewed from the north, with its western walls hard-pressed by massed Ottoman armies. Smoke billows from the Ottoman batteries, and the explosions of mines placed under the walls are not only depicted but specifically noted in the view's legend - which lists 33 items including particularly that portion of the Ottoman attack focused on Chevalier d’Harcourt's position. Meanwhile, in the foreground, a Maltese and Papal flotilla fires its cannon, covering the landing of its own relief forces. Those particular actions tie this view to the year 1668.

The central engraving - also oriented to the south - is a meticulously detailed plan of both the Venetian defenses of Heraklion and the situation of the surrounding Ottomans. Positions of interest, including the embattled city's harbor, specific bastions, the city arsenal, and so on, are labeled and keyed to the legend. Particular attention again is given to the flotilla of troops arriving in the city under the Chevalier d'Harcourt's command, and to the defenses he commanded during the 1668 attacks. (The naval scene at the bottom is a superb expression of Romeyn de Hooghe's art: the beautifully engraved ships in the panorama appear to converge in the distance upon Candia's harbor, where the perspective seamlessly shifts to that of the city plan.) The surrounding Ottoman positions are similarly laid out with granular detail. Their webs of counter-trenches approaching the city, tunnels undermining the walls, the batteries of cannon bombarding the city, and the formidable Ottoman encampments are laid out, with the works in clear detail evocatively embellished pictorially with massed soldiers, smoking cannon, and clustered tents. De Hooghe's masterful work extends also to the decorative elements of the engraving. The panorama of Candia is surmounted with a title banner, held by a winged, roaring Venetian lion. The plan is embellished with the coat of arms of the Chevalier d’Harcourt in the upper left, while the title cartouche in the upper right is framed with a martial scene of putti brandishing swords, banners, and firing cannon with a ferocity sharply at odds with their pudgy nudity.

This work is extremely rare. The plan and view were drawn - probably by the Sieur de Beaulieu - in early 1669, then etched by Romeyn De Hooghe and engraved by Valentin Le Fébure as described above, probably prior to the summer of that year. They were published together as a separately-issued broadside. It was engraved to three separate plates (the view, the plan, and the legend) which variously appear printed to a single sheet, or to multiple sheets joined after printing. We are aware of one example of the full broadsheet having appeared on the market with Antoine de Fer's imprint and a date of 1690. Other examples - most of which consist of only the two lower plates - bear the De Fer imprint dated 1669. Some but not all examples of the 1669 show no border at top and bottom of the main plan; the 1690 also lacks these. Our example of the full three-plate broadsheet exhibits a full border for the main plan, and it is the only example of which we are aware that lacks the De Fer imprint. While the work is too complete for us to suppose that this is a proof state, the lack of the imprint and the presence of the full border suggest that this is the earliest, and possibly a unique, example of this rare broadsheet. It was likely published privately on behalf of d'Harcourt before being picked up for commercial release by De Fer. OCLC lists only six examples of the broadsheet, only two of which incorporate all three plates and all of which have the 1669 De Fer imprint.

Romeyn de Hooghe (Septemer 10, 1645 – June 10, 1708) was a Dutch engraver, portrait artist, caricaturist, painter, and sculptor active in Amsterdam during the second half of the 17th century and opening years of the 18th century. De Hooghe was born in Amsterdam and revealed an early talent for all forms of visual arts. He became known caricaturist and is admired today as one of the first great graphic satirists. During his life he was criticized for his proclivity towards humorous tongue-in-cheek subjects. He nonetheless developed a following and produced a prolific amount of work, some 5000 engravings. He was a member of the Confrerie Pictura in 1662 and 1683. Cartographically he is best known for his decorative border work. His disciples were Filibert Bouttats (1654-after 1731), Filibertus Bouttats (1635–1707), Frans Decker, François Harrewijn, Jacobus Harrewijn, Aernout Naghtegael, Laurens Scherm, and Adriaen Schoonebeek. De Hooghe died in Haarlem on June 10, 1708. Much of his work continued to be republished posthumously. Learn More...


Valentin Lefebre (1637–1677) was a Belgian painter and etcher active in the latter half of the seventeenth century. He was born in Brussels, but settled in Venice where he produced a series of etchings reproducing the paintings of Titian and Veronese. The series was left unfinished at his early death, and finally published in 1682 by Jacques van Campen. He appears to have engraved the lettering for several maps published in Paris, by Du Val and by De Fer. Learn More...


Sébastien Pontault de Beaulieu (1612 - 1674) was a French engineer who is considered to be the first military topographer. Active during the reigns of Louis XII and Louis XIV, Pontault de Beaulieu is more accurately considered to be the creator of military topography and is best known for systematic plans of battles, sieges, military expeditions, and other affairs dealing with the army during this time period. He joined the army at fifteen during the siege of La Rochelle (1627 - 1628) and also saw combat at the siege of Arras, the siege of Perpignan, and the siege of Dunkirk, among others. His major work is entitled Les glorieuses conquêtes de Louis le Grand or Recueil de plans et sues de places assiégés, et de celles où se sont données des bataiiles, avec des discours Learn More...