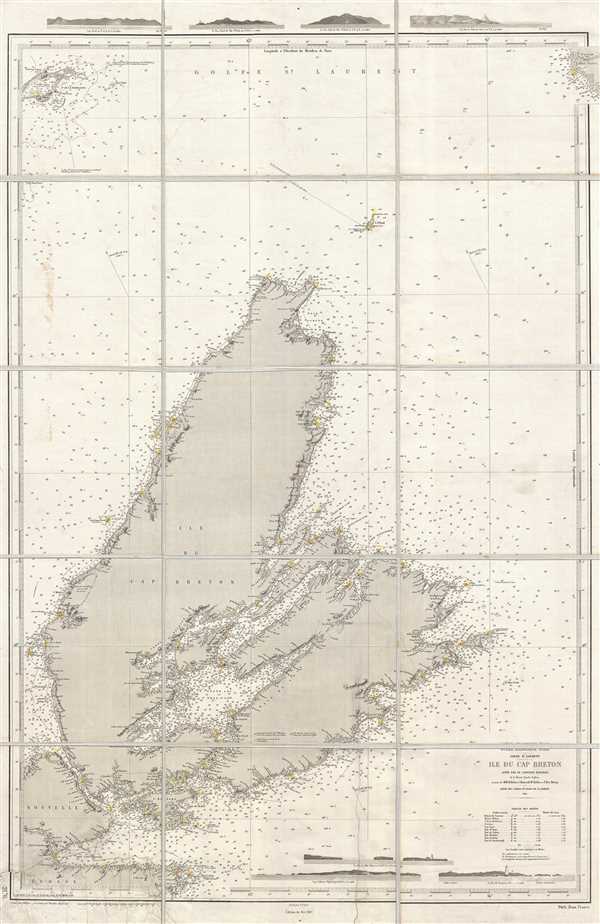 This is a 1905 Dépôt des Cartes et Plans de la Marine nautical chart or maritime map of Cape Breton Island, Canada. It is extremelyt difficult to find any specific maps of Cape Breton Island, this being only the second we have seen in nearly 20 years. The map depicts the whole of Cape Breton Island from Nova Scotia (Nouvelle Ecosse) to Newfoundland (Terre Neuve) and from the Magdalen Islands (Is. de la Madeleine), the Gulf of St. Lawrence, and Newfoundland to Nova Scotia. Presenting a highly detailed illustration of the coastline of Cape Breton Island, this chart evidently bears myriad information important to the mariner. Landmarks along the coast are labeled, such as points and bays. The locations of lighthouses and light-boats are noted all along the coast by yellow and red notations which were added by hand after printing. Innumerable depth soundings populate the map, particularly around the coastlines, which are given in meters. Several profile views are included along the top and bottom borders illustrating different sections of coastline, some of which bear a lighthouse. A tide table is situated in the lower right corner above the profile views and below the title.

This map was produced by the Dépôt des Cartes et Plans de la Marine from Royal Navy records in 1905.