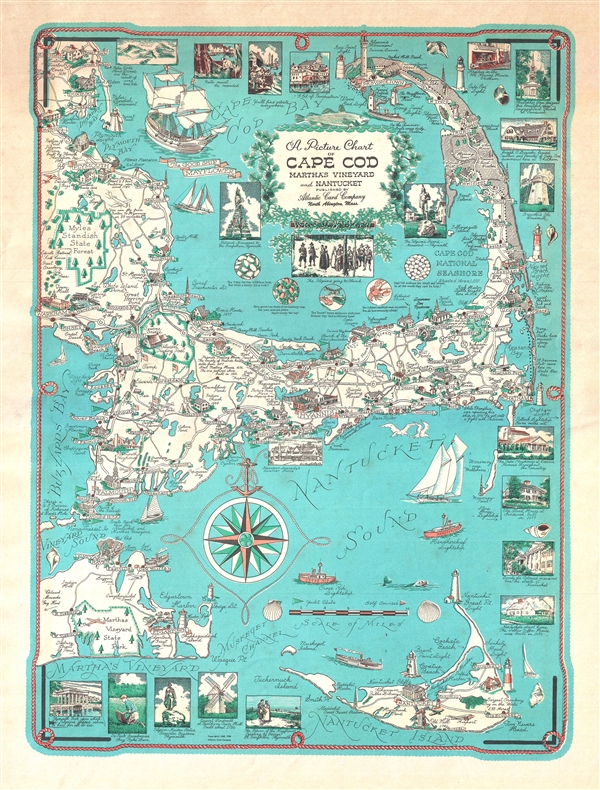 This is a c. 1960 revision of Ernest Dudley Chase's iconic map of Cape Cod, Martha's Vineyard, and Nantucket. The map covers from Marshfield to Nantucket and from Martha's Vineyard to Provincetown. It includes the additional historic towns of Duxbury, Kingston, Plymouth, Falmouth, Hyannis, Chatham, Wellfleet, Nantucket, and Edgartown, among many others. Historical sites are rendered in profile. Surrounding the map there are countless vignettes, most of which are annotated with descriptive text, some quite humorous. President Kennedy's Summer Home is in evidence near Hyannis Port – a revision that appeared c. 1960 after Kennedy was elected.

Chase first drew this map in 1949. It proved popular and was issued in large, medium, and small formats. The present example is a small format issue. In 1955 Clara Chase, Ernest's wife, revised the map and reissued the copyright in her own name. A later revision followed in 1960 in which 'President Kennedy's Summer Home' was added to the map near Hyannis Port. This time Clara's imprint has been removed and replaced by the imprint of the Atlantic Card Company.