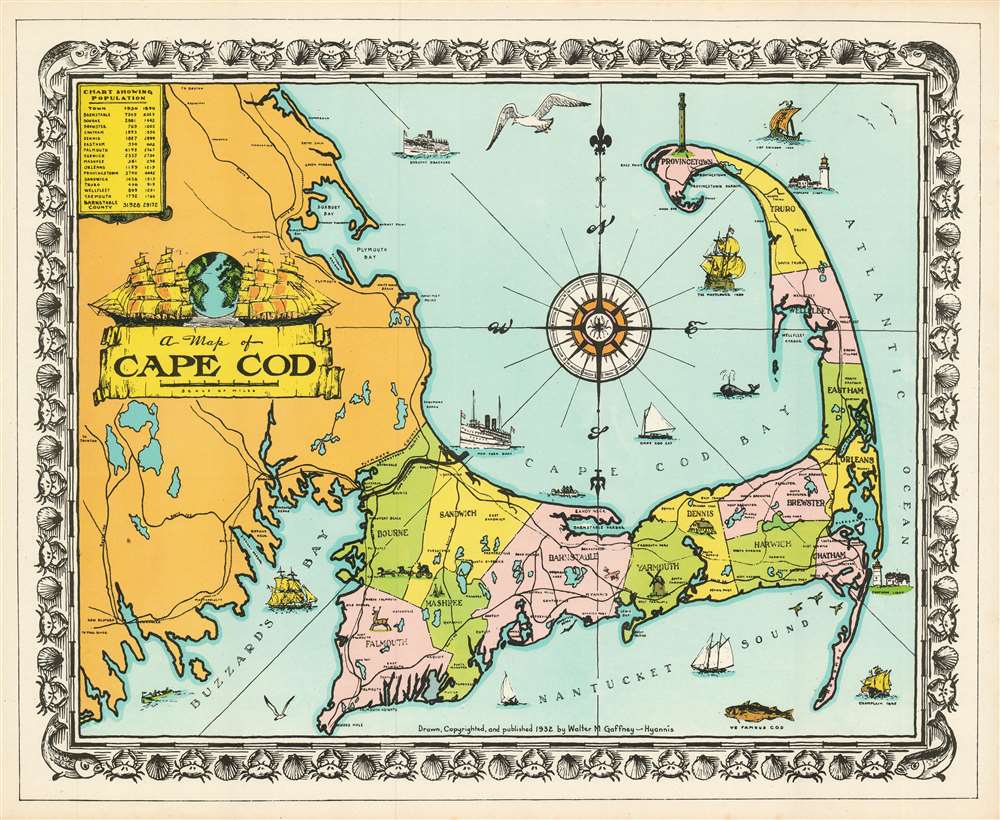 This unusual map of Cape Cod was drawn in 1932 by the Cape Cod architect Walter M. Gaffney during the Great Depression. According to his daughter, Gaffney issued this map to make supplemental money while the architecture business suffered a downturn.

This is considered a 'pictorial map,' reflecting a style that first began to appear around 1910. As a map its intention is not so much to provide direction as to illustrate the character, famous places, and historical appeal of Cape Cod. Cartographically speaking, this map style most likely draws its inspiration from late 19th century 'tourist maps' and 'railroad maps.' Tourist Maps, common to major cities in Europe (usually Paris or London), included profiles of notable buildings and monuments and were designed to help foreign tourists identify and navigate to the most important sights. 'Railroad Maps' are a related genre more common to the United States. During the latter part of the 19th century railroad boom, railroad companies began issuing decorative route maps extolling the virtues various regions and their accessibility by rail.

Standing somewhere between these two map styles, our map combines the decorative aspects of both while reducing cartographic value. It may be hard to get from A to B using this map, but its attractive design and decorative flourishes, make it an excellent souvenir and memento of a wonderful Cape Cod vacation.

This map does appear on the market from time to time, but appears to be neglected in institutional collections: we do not see it cataloged in OCLC.

Walter Melvin Gaffney (April 28, 1900 - January 23, 1983) was an American architect and engineer in Massachusetts. He was a graduate of the Wentworth Institute of Technology in Boston and had been working in an architecture firm on the date of his marriage in 1927. The Great Depression struck Massachusetts architecture firms hard, and work was hard to come by, but the resourceful Gaffney found some additional income in the production of an attractive and successful pictorial map of his home stomping grounds, Barnstable and Cape Cod. Learn More...

Rumsey 8170.
Looking for a high-resolution scan of this?