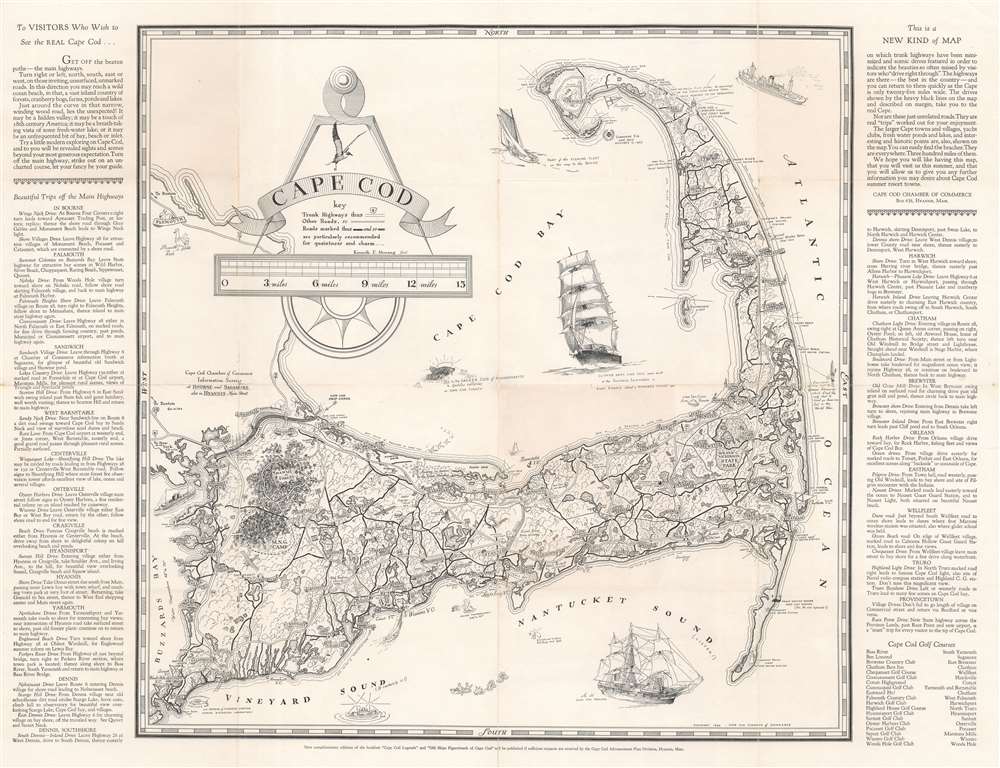 This is a wonderful 1934 Kenneth Morang Art Deco style pictorial map of Cape Cod. Drawn for the tourist market, this decorative map depicts Cape Cod from Race Point and Provincetown to Buzzards Bay. The left and right margins feature various notes containing important information for 'Visitors who wish to see the Real Cape Cod…' with details on 'Beautiful Trips off the Main Highways.' Important towns, including Monument Beach, Chatham, Barnstable, Hyannis, and Provincetown are labeled, along with lighthouses, yacht clubs, lakes, and airports. Ships are illustrated plying the waters of Vineyard Sound, Nantucket Sound, and Cape Cod Bay and an illustration of the Sacred Cod of Massachusetts is situated prominently within Cape Cod Bay. The title cartouche features a compass rose and a sea gull. A key below the title explains the notations used to differentiate between different types of roads. Several points of interests are marked using amusing notes including 'from a point off here laid the German Submarine which fired the only shot to land on American soil in the World War,' 'near the end (or if you prefer, the beginning) of the state long bridal trail which reaches to the Berkshires,' etc.

This map was created by Kenneth E. Morang and published by the Cape Cod Chamber of Commerce in 1934. We note three examples cataloged in OCLC which are part of the collections at the New York Public Library, the Newberry Library, and the University of Minnesota Twin Cities. We also note an example which is part of the collection at the University of Wisconsin Milwaukee.

Kenneth Ellsworth Morang (July 25, 1902 - December 17, 1984) was an American advertising executive. Born in Lynn, Massachusetts, Morang graduated from Everett High School in 1920 and then attended the Massachusetts School of Art. He worked as art director for the Chirung and Northrup advertising agencies before founding his own advertising firm, K.E. Morang Co., in 1947. He served as the firm's president until he retired in 1969. He married Mary Sweeny with whom he had two sons and a daughter. Learn More...