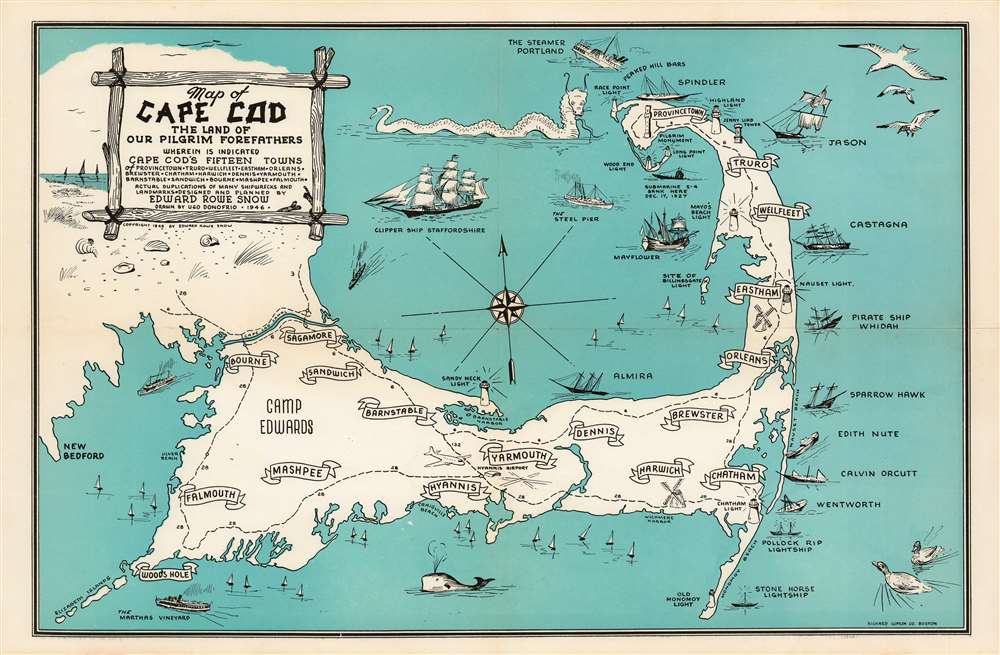 An Attractive and Entertaining Pictorial Map of Cape Cod, Massachusetts
$450.00

A charming 1946 pictorial map of Cape Cod and its towns, created by New England author and historian Edward Rowe Snow. A lover of all things piratical and nautical, Snow brusquely marks out the towns of Cape Cod with banners, but indulges himself in his depictions of ships and shipwrecks, sea birds, whales and even a sea monster menacing Provincetown. The shipwrecks are not generic, but rather are specific, named ships ranging from the Pirate ship ‘Whidah’ (Whydah Gally, a slaver and pirate ship sunk in 1717) to Submarine S-4 (SS-109, a U.S. Submarine sunk in 1927). Camp Edwards (a major WWII training ground) is marked on the map, as is Hyannis Airport.

Publication History and CensusThis piece is scarce on the market. It is neglected in institutional collections: it appears only in the Harvard University library and the Family History Library in Salt Lake City. We see only one example in auction records from 2017.


Richard Friend Lufkin (1895-1963) was a professional civil engineer and head of the Richard Lufkin Company (engineers, draftsmen, artists, and cartographers). He was an Abraham Lincoln scholar and published a number of writings and illustrated maps revolving around Lincoln and his time spent in New England. His company produced a number of pictorial maps focused on Massachusetts, as well as for a number of years printing the map of Boston's MTA.


Donofrio Ugo (fl. 1946-) was an American artist. He is credited with drawing several maps published by Boston cartographer Richard Friend Lufkin in the late 1940s.