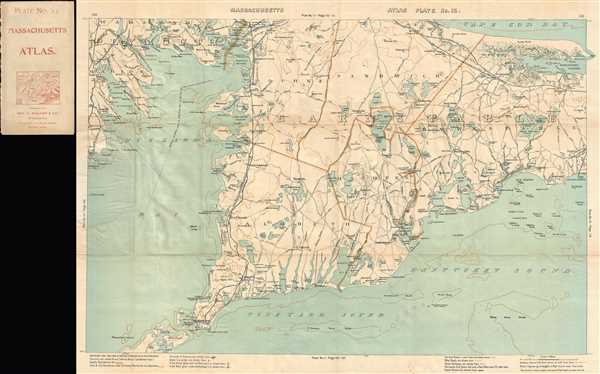 This is a 1907 George Walker and Company pocket map of southern Cape Cod, Massachusetts. The map depicts from Marion to Hyannis and from Bourne to Nantucket Sound and Vineyard Sound. Several counties are labeled, including Marion, Bourne, Falmouth, and Barnstable as well as Cape Cod Bay, Nantucket Sound, Vineyard Sound, and Buzzard Bay. The Cape Cod Division of the New York, New Haven, and Hartford Railroad is depicted, along with numerous roads. Ponds and hills are labeled. Along the bottom border, a legend explains the different notations utilized throughout the map, including the difference between town and county borders and that the abbreviation P.O. after a town name indicates the presence of a post office.

This map was published by George H. Walker and Company in Boston in 1907.