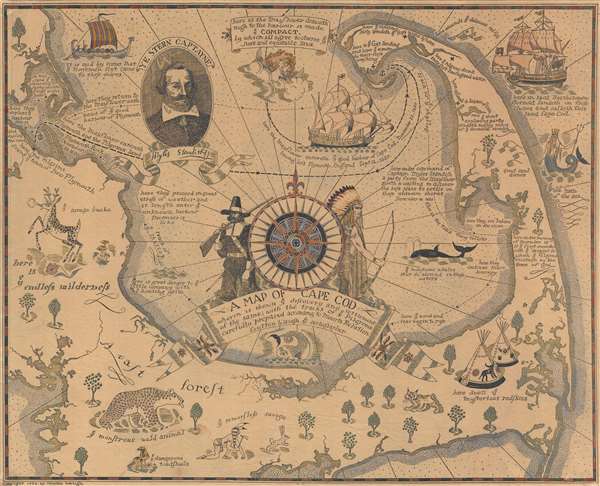 A beautiful example of Coulton Waugh's 1926 map of Cape Cod. This is the second pictorial map issued by Waugh, predated only by his map of Provincetown (1924). The map is centered on Cape Cod Bay and covers from Plymouth and Buzzards Bay east to the Atlantic, and from Provincetown to Hyannis and Chatham. Waugh has lavishly illustrated this map with a host of amusing vignettes ranging from 'ye savage bucke,' 'ye monstrous wild animal,' 'ye dangerous toadstools,' 'ye old map of the sea '(a merman0, and 'ye remorseless savage,' among others. The map also includes historical annotations regarding the voyages of the Mayflower and Bartholomew Gosnold. In the upper right, there is a portrait of Miles Standish, 'ye Stern Captayne.' Cape Cod by is occupied by a grand title cartouche including a compass rose and images of a pilgrim and an American Indian chief.

Waugh issued this map in 1927. It was his second pictorial map, following his map of Provincetown, which was issued in 1924. This map is increasingly scarce on the market.

Frederick Coulton Waugh (March 10, 1896 - May 23, 1973) was an artist, painter, and writer based in Provincetown, MA and later Newburgh, New York. Waugh was born in Conwall, England. He immigrated to the United States in 1907, settling in Philadelphia with his father, maritime painter Frederick Judd Waugh (grandson of portraitist Samuel Waugh). Coulton enrolled in New York's Art Students League where he studied with George Bridgman, Frank Dumond and John Carlson. In 1916 he took work as a textile designer before moving to Provincetown, in 1918, to open a model ship and hooked rug shop. Coulton is famous for his work in the comic strip Dickie Dare and his book The Comics, a comprehensive study analyzing comic strips and detailing their history. Coulton also taught art and wrote instructional and educational art books and edited home study course art textbooks. A professional sailor, he drew historic ships and created decorative maps. His 'serious' paintings, first displayed at the Hudson Walker Gallery in New York were, according to one writer, 'enough to give his father's admirers the jitters.' In terms of cartography, Waugh is known for producing several pictorial maps including a 'Map of Silk,' wProvincetown (1924), Cape Cod (1926), Cape Ann (1927), Old Cape Cod (1930), and the Hudson River (1958). He also issued a map of California (1940) in collaboration with his wife, Odin Burvik (aka Mabel Burwick). Learn More...

Very good. Even toning. Mounted on linen in the fashion of posters.