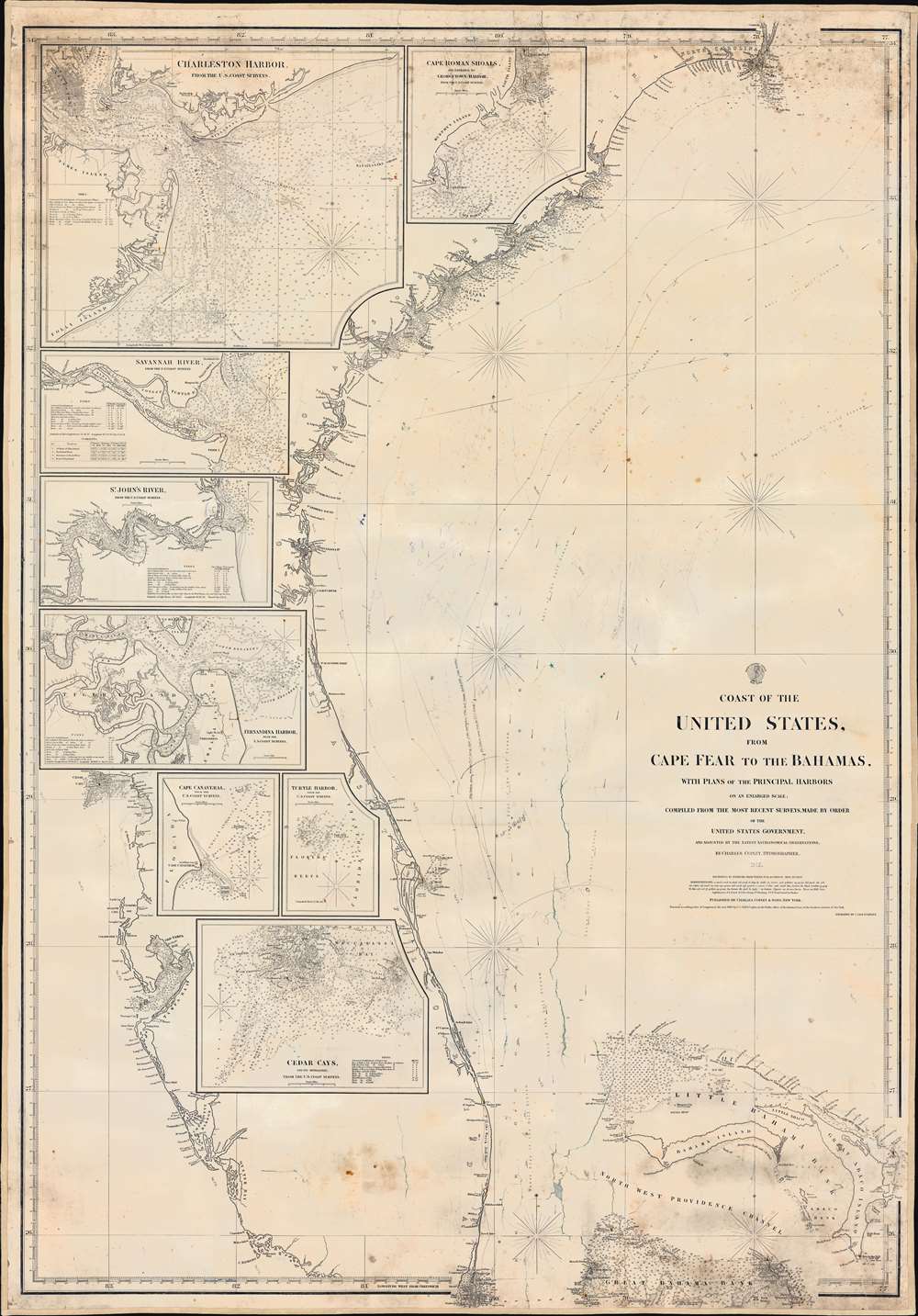 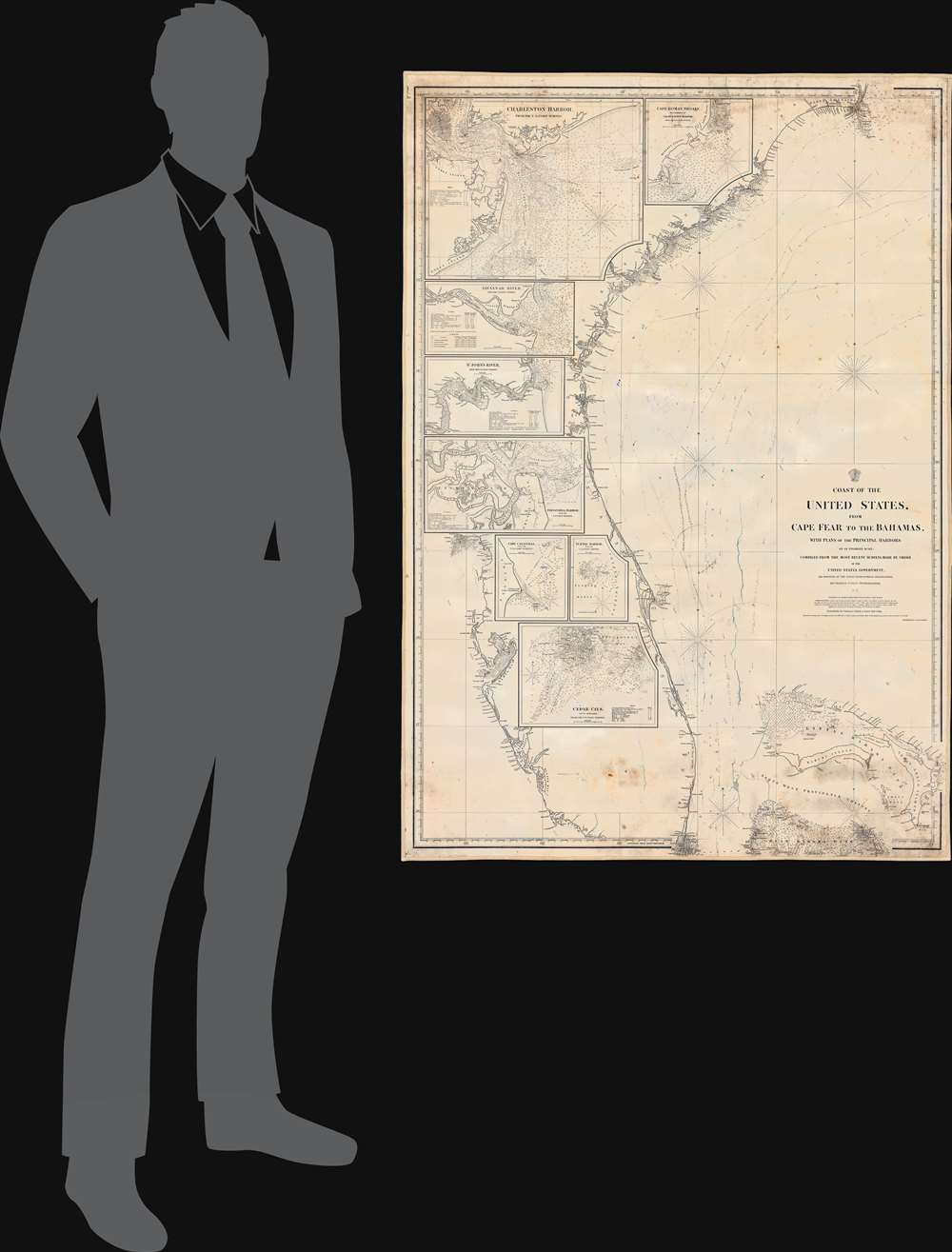 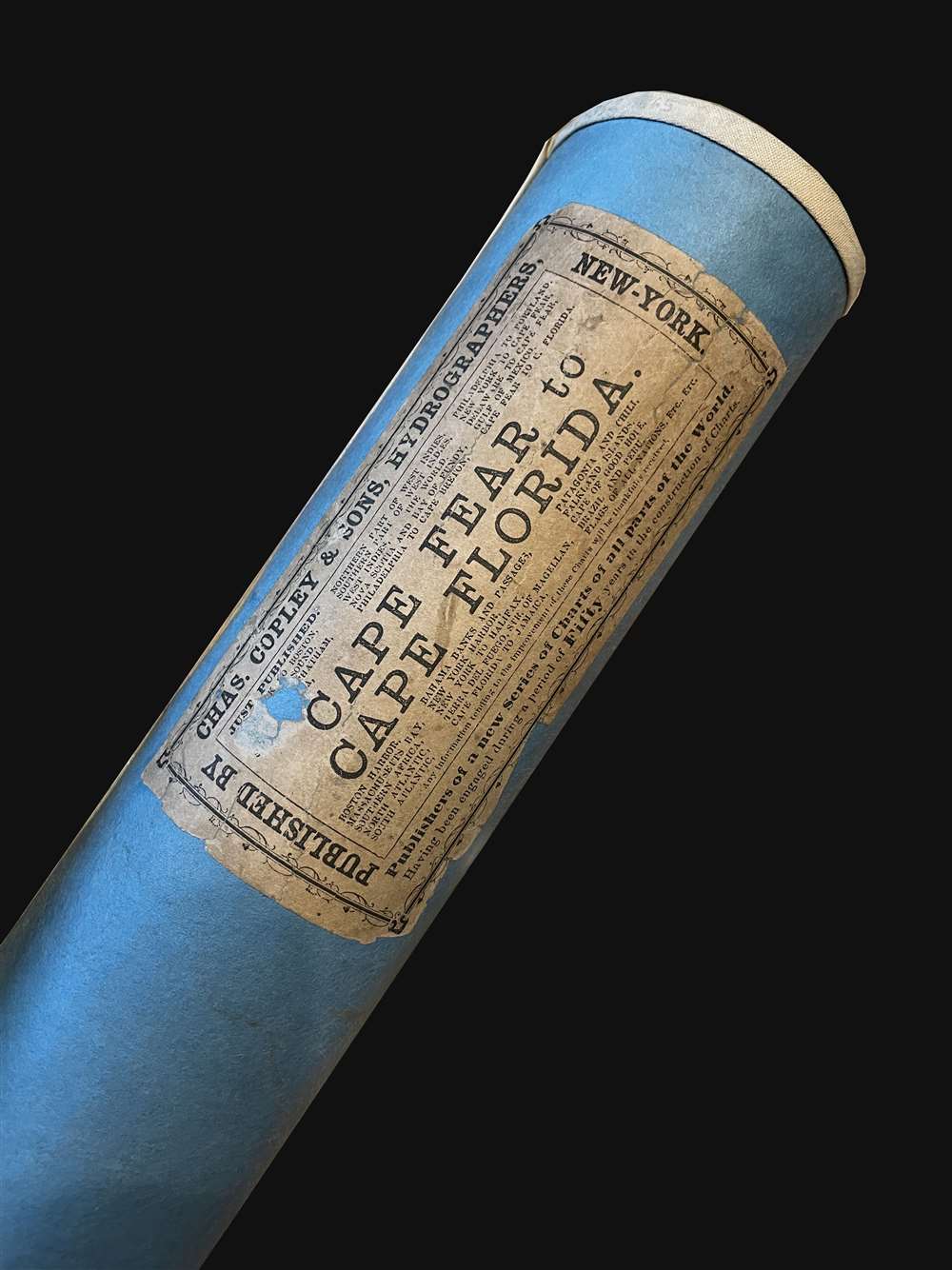 Coast of the United States from Cape Fear to the Bahamas, with plans of the Principal Harbors on an Enlarged Scale; Compiled from the most Recent Surveys, Made by order of the United States Government, and Adjusted by the Latest Astronomical Observations.
1865 (dated)     51 x 34.5 in (129.54 x 87.63 cm)

This is a rare 1865 Civil War Era Charles Copley 'blockade runner's' nautical chart or maritime map of the southeastern coast of the United States extending roughly from Cape Fear, North Carolina, to Miami, Florida and the northern Bahamas. (Miami does not yet exist, but the Miami River and the Cape Florida Light, built in 1860, are shown.) Insets within the peninsula of Florida detail the most important southern harbors: Charleston, Georgetown Harbor, the Savannah River, Jacksonville (St. John's River), Fernandina Harbor, Cape Canaveral, Turtle Harbor, and Cedar Keys. The northern Bahamas are covered in some detail, but the chart does not extend as far south as Nassau.

The coverage, detail, and publication run, 1860 - 1865, of the map beg the question of why it was made at all? Copley was a private map publisher based out of New York, so his maps would not have been in demand by the U.S. Navy, which had access to superior U.S. Coast Survey charts. Nor was there significant 'legitimate' private trade, as southern ports were blockaded. Moreover, the choice to extend the coverage to the Bahamas is telling. In our opinion, this chart can only have been intended for Blockade Runners and smuggling goods out of southern ports to Europe, which was heavily dependent upon southern cotton. Typically, goods, mostly cotton, would be shipped clandestinely to the Bahamas, where they were unloaded by merchant companies and transferred to neutral vessels bound for London or France. While Copley lived in the heart of the Union, and there is no evidence he had Confederate sympathies, he may well have recognized a business opportunity. Here he has compiled the best Coast Survey maps into a comprehensive chart of southern waters covering they key routes for anyone interested in slipping past the blockade. Perhaps he was able to sell them to European navigators calling in New York, who would then use them themselves, or sell the charts on to compatriots.

Blueback nautical charts began appearing in London in the late 18th century. Bluebacks, as they came to be called, were privately published large format nautical charts known for their distinctive blue paper backing. The backing, a commonly available blue manila paper traditionally used by publishers to wrap unbound pamphlets, was adopted as a practical way to reinforce the low-quality paper used by private chart publishers to cut costs. That being said, not all blueback charts are literally backed with blue paper. The earliest known blueback charts include a 1760 chart issued by Mount and Page, and a 1787 chart issued by Robert Sayer. The tradition took off in the early 19th century, when British publishers like John Hamilton Moore, Robert Blachford, James Imray, William Heather, John William Norie, Charles Wilson, David Steel, R. H. Laurie, and John Hobbs, among others, rose to dominate the chart trade. Bluebacks became so popular that the convention was embraced by chartmakers outside of England, including Americans Edmund March Blunt, Charles Copley, and George Eldridge, as well as Scandinavian, French, German, Russian, and Spanish chartmakers. Blueback charts remained popular until the late 19th century, when government subsidized organizations like the British Admiralty Hydrographic Office and the United States Coast Survey, began issuing their own superior charts on high quality paper that did not require reinforcement.

This map drawn by Charles Copley and first issued in 1860, shortly before the American Civil War (1861 - 1865). It was copyrighted to his sons, C. C. J. and F. S. Copley - suggesting by this time they had largely taken over the day-to-day operation of the firm. A second edition appeared in 1864 and is known in only one example, at the British Library. A third edition, as here, was issued in 1865. Two examples of the present 3rd edition are known, at the Touchton Map Library at the Tampa Bay History Center, and at the Library of Congress.

Charles Copley (1800 - November 17, 1880), was an American nautical chart and globe publisher based in Brooklyn, New York and active in the middle part of the 19th century. He was born in England and emigrated to the United States in the 1840s. He became a citizen in 1844. Charles Copley's earliest work is associated with the firm of E. and G. W. Blunt and his name appears as hydrographer or engraver on several of Blunt's c. 1840 charts – so he must have began working the Blunt shortly after emigrating. Around 1847 Copley began publishing independently, advertising himself as an engraver and map publisher. Most of his independent work was published in the 1850s. By 1860, the firm renamed itself Charles Copley and Son's, accommodating Charles John Copley Jr. (1826 - 18xx) and Frederick S. Copley (1827 - 18xx). From this point forward, most charts are copyrighted by 'C.C.J and F.S. Copley.' All Copley charts are extremely rare. Learn More...