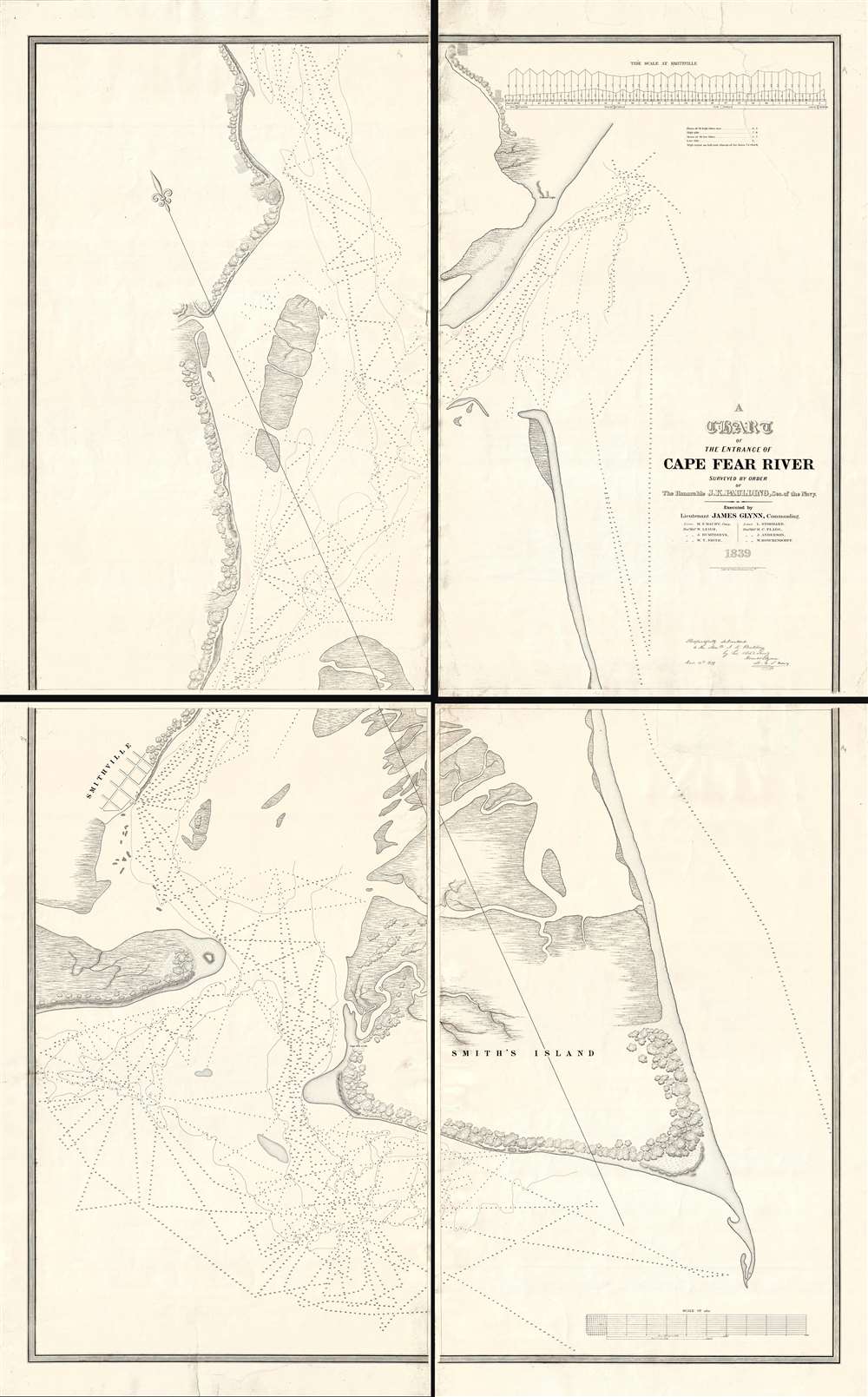 Without a doubt, this 1839 wall-map sized chart by James Glynn is the finest map of Cape Fear and vicinity to appear in the 19th century. Although much changed from repeat storms, this 1839 chart covers roughly from Kure Beach and Fort Fish Historic Site to the southern part of Bald Head Island (Smith Island) and from Southport (Smithville) to the Atlantic. The map exhibits a wealth of detailed soundings as well as some landside information including the course of rivers and streams, the positions of the Federal Point and Cape Fear lighthouse, and the street grid of Smithville / Southport.

In Search of a location for a Southern Naval Base

This massive chart was prepared in 1839 as part of an extensive government survey of the Cape Fear region by U.S. Navy Lieutenant James Glynn. Conducted by the schooners U.S.S. Experiment and U.S.S. Engineer, the goal of the marine survey was to identify an ideal location for a Southern Naval Yard. In addition to this map, the survey produced large format maps of the Beaufort Region and another chart following the Cape Fear River further north.

The Contributions of Mathew Fontaine Maury

In addition to Glynn, part of the mapping efforts were commanded by Lieutenant Mathew Fontaine Maury. Shortly after this survey was issued, Maury broke his leg in a stagecoach accident in Tennessee, effectively ending his naval career. Although only a young officer at the time, Maury went on to become one of the leading figures on American oceanography and navigation, nicknamed the 'Pathfinder of the Seas,' 'Father of Modern Oceanography and Naval Meteorology', and later, 'Scientist of the Seas.' Later, he became Superintendent of the U.S. Naval Observatory and head of the Depot of Charts and Instruments. When the Civil War broke out, he joined the Confederacy becoming the Chief of Sea Coast, River and Harbor Defenses. With regard to this map, Maury commanded the secondary surveying vessel, the schooner U.S.S. Engineer.

This map was commanded by James Kirke Paulding and is based upon surveys conducted by James Glynn and Mathew Fontaine Maury. The map was published by the United States Navy and printed by the lithographer Philip Haas. This and other charts associated with the Glynn surveys were issued in a bound portfolio published in 1843. The present example, however, may be earlier, as it bears in 1839 imprint and printed signatures from its makers, Glynn and Paulding, identifying it as having been issued in December of 1839.

The chart is of the utmost rarity, with the OCLC citing only 6 examples: the Library of Congress, the State LibThe first printed view of Singapore. This view was published in 1828 after a painting by Royal Navy Captain Robert James Elliot. It looks at Singapore from Government Hill. rary of Massachusetts, Dartmouth Library, the University of Wisconsin Library, and the University of California Library. There is only a single example cited in North Carolina at the University of North Carolina, Chapel Hill.

James Glynn (June 28, 1801 - March 13, 1871) was an American naval officer active in the United States during the middle part of the 19th century. Glynn joined the U.S. Navy on March 4, 1815, when he was just 14 years old. He became a lieutenant in 1825, a commander in 1841, and a captain in 1855. As a lieutenant he commanded 2 ships, the schooners U.S.S. Experiment and U.S.S. Engineer, which were charged to conduct a detailed survey of the Cape Fear River area for the potential construction of a Southern Navy Yard. During the Mexican-American War Glynn served on the coast of California. After the war, he was sent to China in command of the U.S.S. Preble, where learning of 15 American whalers imprisoned after a shipwreck in Hokkaido, he turned his attentions to Japan. Through a show of force and keen diplomacy he negotiated with the isolationist Tokugawa officials an secured the release of the surviving prisoners. His work is credited with setting the stage for the expedition of Commodore Matthew Perry to Japan in 1853 and 1854. Learn More...


Matthew Fontaine Maury (January 14, 1806 - February 1, 1873), United States Navy was an American astronomer, historian, oceanographer, meteorologist, cartographer, author, geologist, and educator. He was nicknamed "Pathfinder of the Seas" and "Father of Modern Oceanography and Naval Meteorology" and later, "Scientist of the Seas," due to the publication of his extensive works in his books, especially Physical Geography of the Sea (1855), the first extensive and comprehensive book on oceanography to be published. Maury made many important new contributions to charting winds and ocean currents, including ocean lanes for passing ships at sea. In 1825 at age 19, Maury joined the United States Navy as a midshipman on board the frigate USS Brandywine. Almost immediately he began to study the seas and record methods of navigation. When a leg injury left him unfit for sea duty, Maury devoted his time to the study of navigation, meteorology, winds, and currents. His hard work on and love of plotting the oceans paid off when he became Superintendent of the U.S. Naval Observatory and head of the Depot of Charts and Instruments. There, Maury studied thousands of ships' logs and charts. He published the Wind and Current Chart of the North Atlantic, which showed sailors how to use the ocean's currents and winds to their advantage and drastically reduced the length of ocean voyages. Maury's uniform system of recording oceanographic data was adopted by navies and merchant marines around the world and was used to develop charts for all the major trade routes. Maury's work on ocean currents led him to advocate his theory of the Northwest Passage, as well as the hypothesis that an area in the ocean near the North Pole is occasionally free of ice. The reasoning behind this was sound: Marked harpoons found in captured whales in the Atlantic had been shot by ships in the Pacific and vice versa, and this occurred with a frequency that would have been impossible had the whales traveled around Cape Horn. With the outbreak of the Civil War, Maury, a Virginian, resigned his commission as a U.S. Navy commander and joined the Confederacy. He spent the war in the South, as well as abroad in Great Britain, acquiring ships for the Confederacy. Following the war, Maury accepted a teaching position at the Virginia Military Institute in Lexington, Virginia. He died at his home in Lexington in 1873 after completing an exhausting national lecture tour. Learn More...


Philip Haas (1808 - c. 186?) was a German-American daguerreotypist and lithographer active in the mid-19th century. Haas was born in Germany but emigrated to the United States in 1834, rapidly establishing himself as a lithographer and printer in Washington D. C. Between 1834 and 1840 he received several government printing contracts from the U.S. Navy and other offices. Around 1840 he may have traveled to Paris to study the newly invented daguerreotype photo system. His earliest known daguerreotype is dated March of 1843. With his 1843 portrait of president John Quincy Adams, Haas is credited with being the first to transfer a daguerreotype directly to lithographic stone. He relocated to New York City in 1944, opening a daguerreotype gallery on Broadway, which he ran to about 1860. In 1860, at the outbreak of the American Civil War, Haas enlisted with First New York Engineers and was sent to South Carolina. He may have lied about his age, as he was 53 at the time, too old for enlisted service. Taking advantage of his daguerreotyping skills, Haas, produced several important photographs, including images of the U.S.S. New Ironsides in action. Poor health and an end to the war led him to retired on May 25, 1863. The date of his death is unknown. Learn More...

Very good. Some expert restoration to edges, including minor infill, and repair of tears. Could be joined upon request for additional fee.