1860 Blackie Map of the Cape of Good Hope 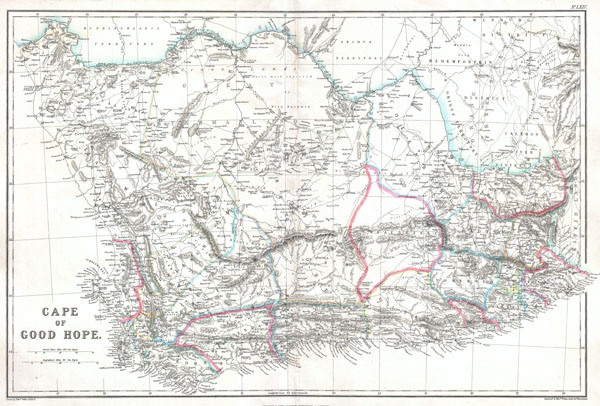 1860 Blackie Map of the Cape of Good Hope

An extremely attractive c. 1860 of South Africa and the Cape of Good Hope. Covers much of the southern top of Africa from S. Helena Bay and the Cape of Good Hope to 'Kaffir Land' in the east. This highly detailed map is most likely based on Edward Weller's map of the same region prepared for the Weekly Dispatch Atlas. Highly detailed and full of interesting notations such as 'Parts most infested with Wild Bushmen.' Color coded according to region. Published as plate no. LXIV in Blackie's Imperial Atlas.

Blackie and Sons (fl. 1807 - 1991) was a Glasgow based publishing firm active from 1807 to 1991. The firm was established on November 20 1809 by John Blackie Sr. (1782-1874), Archibald Fullerton and William Sumerville as "Blackie, Fullerton and Company". Though trained as a weaver, Blackie envisioned a profitable business selling large books and novels by monthly subscription. Their first major publications appeared in 1811 and were subscription based religious and reference texts including several atlases. In 1931 Blackie bought out his partners and formally named the firm "Blackie and Son". While Blackie and Son had its main offices 7 Stanhope Street, Glasgow, it maintained subsidiary offices in London (6/18 William IV Street Charing Cross), Canada and India. In the next 100 years Blackie and Son grew into an enormous international publishing concern. Nonetheless, it remained a family business and was run by members of the Blackie family until it ceased publishing in 1991 Learn More...