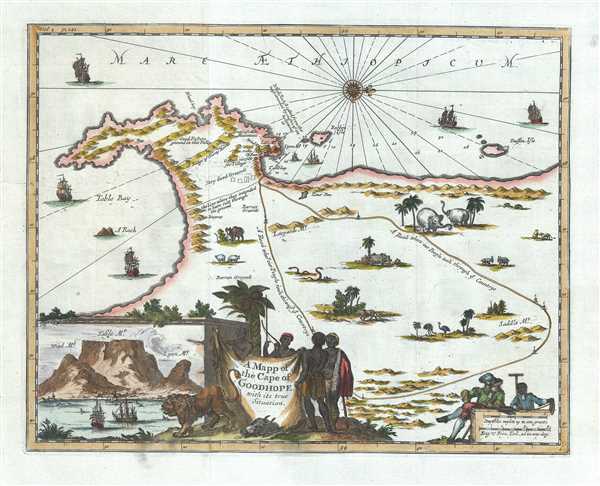 Scarce early map of the Cape of Good Hope.

This is a scarce English edition 1703 map of the Cape of Good Hope in Cape Town, Africa by Dutch traveler Johannes Nieuhof. Oriented with north in the east, it covers from False Bay past the Cape of Good Hope northward past Cape Town as far as Dassen Island. This beautifully rendered map, based on the original Dutch version of 1682 appearing in Johan Nieuhoff’s travel book, features relief pictorially and names various mountains, bays and islands. Several illustrations of wild and domestic animals, including elephants, rhinos, snakes, cows, etc. are included throughout. Ships can be seen sailing in the ocean. Some oceanic depths are also noted along the coast. Several annotations such as ‘Good pasture ground in this valley,’ ‘Whale Rock so called from the noise it makes by reason of its hollowness’, ‘Ground not fit for tillage’, etc., give some information about the land.

The notorious prison, Robben Island is noted. False Bay is labeled Table Bay with a dotted line showing a canal from False Bay to Table Bay proposed by Commissioner-General Rijckloff van Goens, which was never built.

The lower left quadrant features a beautiful illustration of Table mountain and Table Bay. The beautifully rendered title cartouche features an animal hid held by native and a lion. The lower right includes the scale (in Dutch) with an illustration of a Dutch with a native holding a measuring instrument. This map is the English version of the original Dutch map first appearing in Johan Neiuhoff’s 1682 book based on his travels. Johan Neiuhoff traveled to the Cape of Good Hope in 1672 and later disappeared in Madagascar.

Johan Nieuhof (1618 - 1672) was a traveler and explorer with the Dutch East India Company. Born in Uelsen, a small town in Lower Saxony near the Dutch-German border, Nieuhof spent most of his life in Brazil, China and India. He is most famous for his written account of his journey from Canton to Peking in 1655-1657 called An embassy from the East-India Company of the United Provinces, to the Grand Tartar Cham, Emperor of China. The book, which improved European knowledge about China, also severed as a major influence for the growth of Chinoiserie, making Niefuhof an influential Western writer on China. While stationed in Ceylon, he was imprisoned for trading illegally in pearls and later fired from the Dutch East India Company. After a short family visit in 1672, on his way back to the East Indies, he stopped in Madagascar and traveled inland to trade with the local tribes as well as secure water for the crew, but never returned. The captain, after waiting three days, assumed that Nieuhof and his company were killed. Later, a ship was sent from the Cape of Good Hope to retrieve the party, but found no trace of Nieuhof or his company. Learn More...