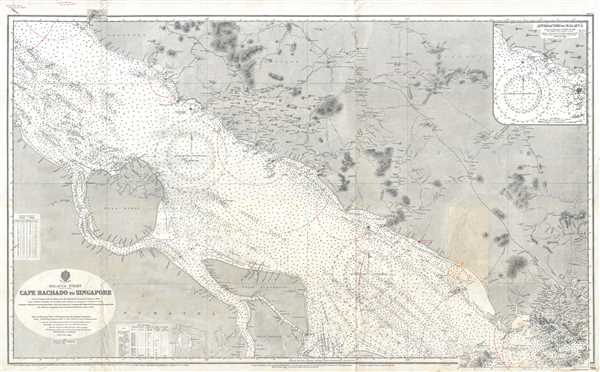 Features numerous manuscript notations and updates, including a new depiction of part of the coastline.

This is a 1928 British Admiralty nautical chart or maritime map of the Malacca Strait. The map depicts the region from Sumatra to Singapore Island and from Malaysia to Great Karimun Island (Pulo Karimun). A unique piece, numerous manuscript notations and updates have been added to this chart. A paste-down has been placed near the in the lower right quadrant, creating manuscript updates to the coastline and illustrating several rivers, one of which stretches a decent distance inland. Manuscript half-circles have been added in the strait itself, most likely to depict the distance out into the strait different beacons are discernable by a passing mariner. Not all the beacons feature this notation, creating the presumption that whoever created these notations may have only found certain beacons to be important when they were transiting the strait.

A chart full of detail, myriad depth soundings are noted throughout the strait. Several islands along the length of the strait are labeled, along with numerous locations along the Malaysian (Malay or Malaccan) coastline. Beacons are noted by yellow dots and inland topographical features are shown. Singapore Island is illustrated in detail, with numerous rivers, mountains, and beacons noted. The city of Singapore is labeled, as is Johore Bahru.

This chart was engraved by Davies and Company and published by the Admiralty in 1928.