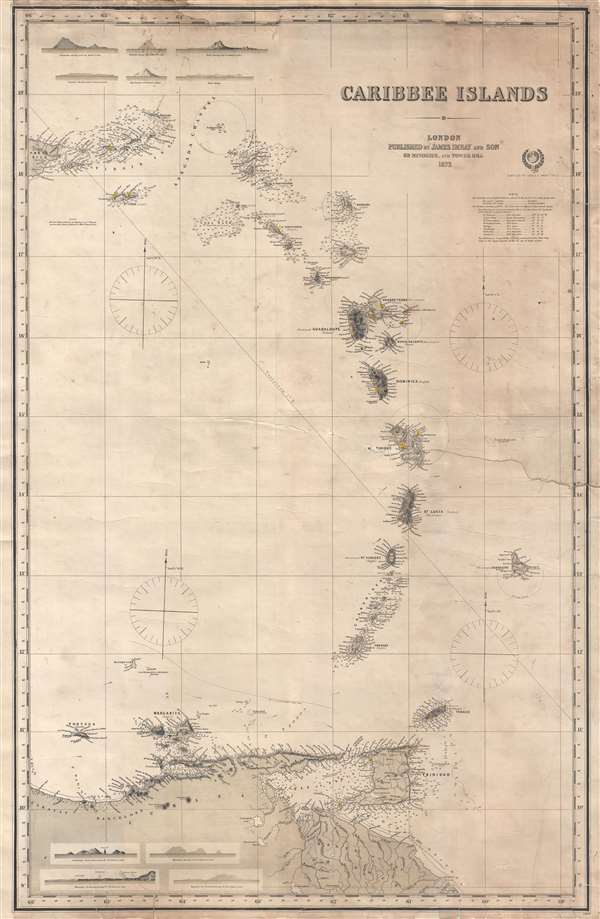 Working Nauical Chart encompassing all of the Lesser Antilles, including the Virgin Island and St. Lucia.

This is an 1873 James Imray blueback nautical chart or maritime map of the Lesser Antilles in the West Indies. The map depicts the region from the eastern portion of Puerto Rico to Barbados and from Puerto Rico to South America, including the Virgin Islands, Antigua and Barbuda, Montserrat, Martinique, Guadeloupe, Dominica, St. Lucia, St. Vincent and the Grenadines, and Trinidad and Tobago. Highly detailed, coastal locations are labeled on each of the islands and topography is illustrated on those islands that had been surveyed. Each island also bears the label of which colonial power controlled the island, whether it was France, Spain, the United Kingdom, the Netherlands, or Sweden. Depth soundings are included around the Virgin Islands, Anguilla, St. Martin, St. Bartholomew, Montserrat, Antigua and Barbuda, St. Eustatius, St. Christopher, Nevis, the Grenadines, and Trinidad and Tobago, as well as along the South American coast. Numerous locations along the coast of South America are also labeled, including the Orinoco River Delta and its mouth. Ten profile views of the islands are included along both the top and bottom border, including Guadeloupe, Martinique, Barbados, and St. Eustatius. Notes on the soundings and lines of longitude are situated along the right border, along with a note from the publishers stating that they 'request communications that may tend to the improvement of this, or any of their works'.

This map was compiled by James F. Imray and published by James Imray and Son in 1873. This map is owned jointly by Geographicus and Vetus Carta Maps.

Good. Full professional restoration. Portions of top and bottom border reinstated in manuscript. Light soiling and toning. Blank on verso.
Looking for a high-resolution scan of this?