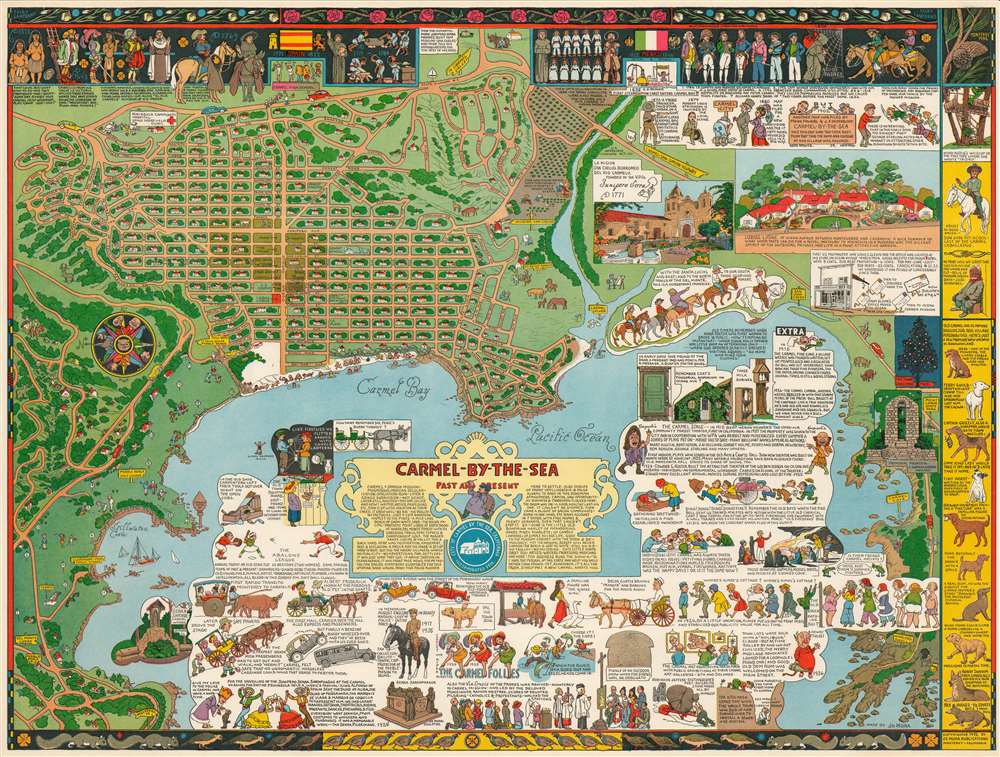 An iconic map from the Golden Age of Pictorial Cartography.
$950.00

A beautiful example of the scarce 1942 Jo Mora pictorial map of Carmel, California. Located on the southern edge of the Monterey Peninsula, Carmel-by-the-Sea, is widely regarded as one of California's most beautiful beach-front communities. The map is oriented to the East, with Carmel at top and Carmel Bay at the bottom. The Carmel as presented here is very similar to modern-day Carmel, with the street layout clearly recognizable. Throughout, as was Mora's style, the map is rich with pictorial vignettes and other elements illustrating local history, humor, and folklore. Even the canines of Carmel have their place, with 10 famous dogs illustrated along the right border. This map is generally considered to be among the finest of Mora's map pieces.

Pictorial qualities have been common in cartography from at least from the 16th century, when publishers like Braun and Hogenberg incorporated view-like qualities and other pictorial elements into their famous city plans. Braun and Hogenberg, and similar cartographers, issued their town books to express, not necessarily the geography their subjects, but rather the 'essence' of the town/city. As mathematics and surveying principles became more advanced, travel increased, and the ability to translate 2-dimensional cartographic perspectives into an understanding of the actual world became commonplace, maps themselves transformed. This trend is a recognizable progression that evolved from the 17th to the 19th centuries. By the late 19th century most maps had become geographical tools that illustrated the region cartographically, but failed in the original raison d'être as expressed by Braun and Hogenberg, to illustrate a place's 'essence'. So, where a city map of 19th century Paris might provide a completely navigable presentation of the city, one could glean almost nothing of Paris' character from it. In the late 18th century, the first modern 'pictorial' style maps developed. These maps, like Tomas Lopez's 1788 map of Seville, attempted to provide both cartographic accuracy and pictorial elements that might convey the character of the city. In that case, Lopez incorporated pictorial vignettes to illustrate important buildings and monuments. This style became increasingly commonly throughout the 19th century and early 20th centuries, particularly for centers of commerce like London, Paris, and Rome, where they are often mass produced and referred to as 'monumental' maps. The style further evolved in the early to mid-20th century, when revolutionary cartographers and illustrators like MacDonald Gill, Jo Mora, Frank Dorn, Ernest Dudley Chase, and many others, combined vignette style illustrations, modern printing techniques, inspiration from Japanese printmaking and manga, and from clever satirical cartographers/artists like Fred Rose, to produce maps that once again focused on revealing the essence a place, usually, but not always, at the sacrifice of cartographic precision.

This map was drawn by Jo More and published by Jo Mora Publications of Monterey, California, in 1942. The map was popular and there are a few variants in terms of color. There were also black and white issues.]. Some have a note on the bottom with a price '50c with tube'. The OCLC notes 5 examples and the map appears from time to time on the private market.