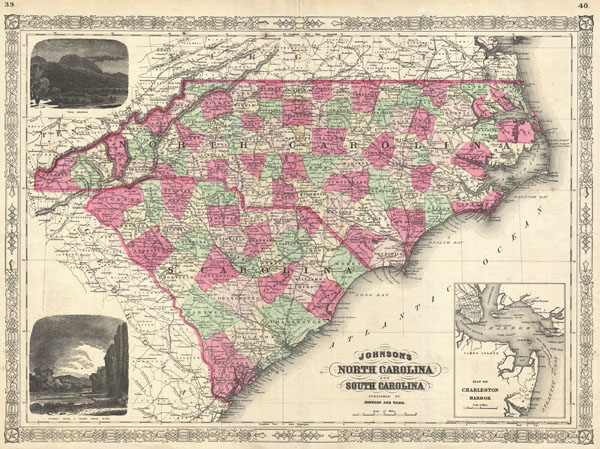 A beautiful example of A. J. Johnson's 1866 map of North Carolina and South Carolina. Offers a fascinating snapshot of these states shortly following the close of the American Civil War. Map shows both states in full with color coding according to county. An inset map in the lower right hand quadrant depicts the city and harbor of Charleston. Throughout, Johnson identifies various cities, towns, rivers and assortment of additional topographical details. Engraved views depicting the 'Chimney Rocks and French Broad River' and 'Table Mountain,' decorate the upper left and lower left hand quadrants, respectively. Features the fretwork style border common to Johnson's atlas work from 1864 to 1869. Published by A. J. Johnson and Ward as plate numbers 39 and 40 in the 1866 edition of Johnson's New Illustrated Family Atlas. This is the last edition of the Johnson's Atlas to bear the Johnson & Ward imprint.