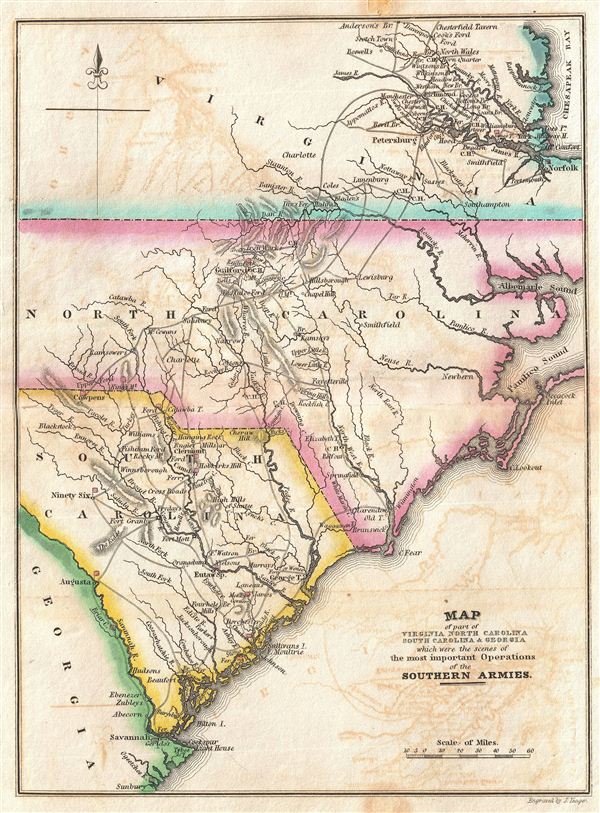 The southern theater of the American Revolutionary War.

This is a rare map North Carolina, South Carolina, and Virginia during the Revolutionary War issued for John Marshall's 1832 edition of the Life of Washington. The map covers from the Chesapeake Bay and Richmond, Virginia southwards past North and South Carolina to Savannah, Georgia and the Savannah River. Various rivers, major roads, and the sites of important battles are noted.

Marshall prepared this map to illustrate the southern theater of the American Revolutionary War. Towards the end of the War, having suffered major losses in the Northern Colonies, the British began to shift their strategic attention towards the American Southern Colonies. Between 1778 and 1779 the British seized control of several important southern centered including Savannah and Charleston. Backed by a strong loyalist presence, the British where able to maintain control of the primary strategic points in the Southern Colonies until the end of the war in 1783.


Joseph Yeager (1792 - 1859) was a Philadelphia based engraver active in the first half of the 19th century. Yeager was trained early on as an engraver with works appearing as early as 1808 and 1809, at just 16 years of age. By the time he reached adulthood, Yeager had become one of the top engravers in Philadelphia, where he maintained offices from 1816 to 1845. He is responsible for numerous maps and views including the map plates for Carey and Lea's American Atlas and the map plates for the 1832 edition of John Marshall's Life of Washington, and a stunning illustration of the Battle of New Orleans. Yeager also published numerous children's books and, in time, became the president of a railroad.