1801 Tardieu Map of the Carolinas, Kentucky, and Tennessee w/Georgia 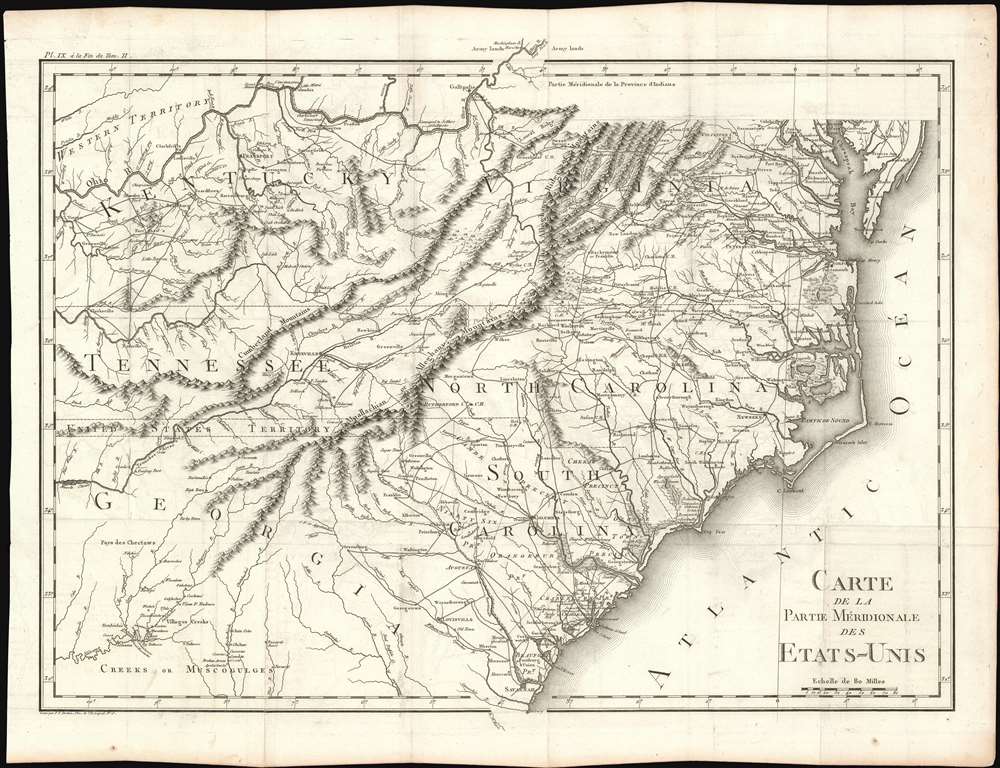 1801 Tardieu Map of the Carolinas, Kentucky, and Tennessee w/Georgia

An important and highly detailed 1801 map of the southeastern United States by Pierre Francis Tardieu. The map was issued to a accompany Michel Guillaume de Crevecoeur's Le Voyage dans la Haute Pennsylvania et dans l'État de New-York, one of the most important post-Revolutionary War books about life and economy in the fledgling United States. Coverage extends from the Chesapeake Bay and the Ohio River south as far as central Georgia, including the modern-day states of Virginia, Kentucky, Tennessee, North Carolina, South Carolina, and parts of Georgia and Alabama. The map is notable for its exceptional detail, naming towns, mills, mines, and roads, as well as surveyed tracts intended to compensate Revolutionary War soldiers for their effort.

The careful observer will note an 11-mile-wide strip of land separating Tennessee and Georgia. This is a legacy of the old coast to coast royal charters upon which the South Carolina and Georgia were initially established. For a time both Georgia and North Carolina claimed this strip of land, although it was hardly disputed being a remote and mostly unsettled bit of territory. After the American Revolutionary War, when Georgia and South Carolina met at the Convention of Beaufort to negotiate their formal boundary, George ceded the territory. A few months later, South Carolina also ceded the territory, this time to the United States. Georgia at the time, as on this map, was a sprawling territory extending westward as far as the Mississippi River. When Alabama and Mississippi were created, part of this strip was ceded back to Georgia. This cartographic anomaly appeared on certain derivative maps until about 1844, by which time much had changed in the region.

This map can trace its origins to an obscure map published in 1799 by Francois-Alexandre-Frederic, Duc de La Rochefoucauld-Liancourt (1747 - 1827). Although liberal and a reformer, Liancourt was forced to fee France during the French Revolution, making his home briefly in England before traveling extensively in the United States. He returned to France in 1799, compiling an 8-volume travelogue of his adventures in the United States, Voyage dans les États-Unis d’Amérique, fait en 1795, 1796 et 1797. When Pierre Francis Tardieu was contracted to engrave this map for Michel Guillaume de Crevecoeur's Le Voyage dans la Haute Pennsylvania et dans l'État de New-York, he most have turned to Liancourt as the most up-to-date French source on the cartographic disposition of American southeast. This present example is the 1801 first edition of this map. This important map is uncommon on the market, but well represented institutionally.