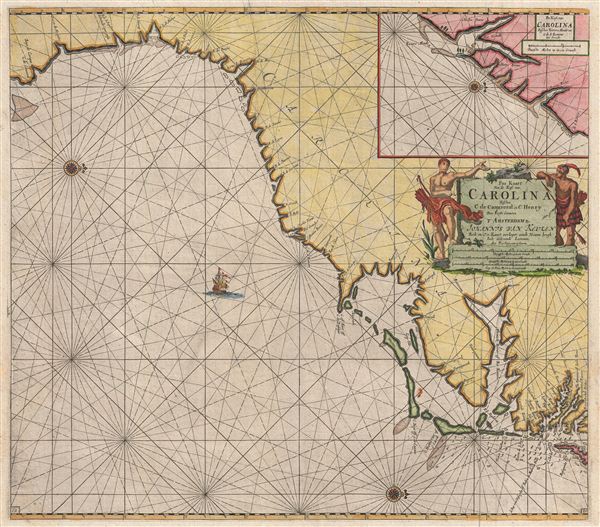 One of the most decorative early nautical charts of the American Southeast.

Among the most scarce and decorative Dutch nautical charts of the American southeast, this is Johannis Van Keulen's and C. J. Vooght's 1687 maritime map of the Virginia, Carolina, Georgia and Florida coasts. Oriented to the west (with north to the right), this map covers from the entrance to the Chesapeake Bay southwards, along the eastern seaboard, as far as Cape Canaveral, Florida. Like most nautical charts, this map focuses on the coast line and offers limited inland data. The cartographer, C. J. Vooght, has based this map on various unpublished and unknown sources; however, he appears to reference the c. 1590 maps of John White and Jacques Le Moyne for place names in Virginia and Carolina, respectively. Spanish place names are used for several of the capes, no doubt referencing said 'unknown' sources. The region between Cape Hatteras and the mouth of the Chesapeake Bay features numerous depth soundings.

As this map was issued most of this region was disputed between the colonial powers of Spain, entrenched in St. Augustine Florida, and the english who had been slowly moving into the Ablemarle Sound and Cape Fear River region from their colony in Virginia. Carolina received its official grant from the British Crown in 1663 – the southward expansion was not only a territorial expansion but a move that positioned the British colonies to more actively trade with the lucrative West Indies colonies. The southernmost British settlement at the time was Charleston, which appears on the west bank of the Ashley River (here called by the Spanish name, Rio Grande) in both the main map and the inset in the upper right quadrant. Charlestown was founded by just a few years earlier, in 1670 by Anthony Ashley-Cooper, one of the Lords Proprietors, to become a 'great port towne', a destiny which it fulfilled.

There is some confusion regarding the original publication date of this map. An english edition appeared in 1682 which was apparently based on an earlier Dutch edition. The fact the Van Keulen does not include updated information from the 1682 Second Lords Proprietor's Map, suggests that the two maps may have been published simultaneously. The present example corresponds to the second state, 1687, identifiable by the no. 18 set in the lower left corner. Uncolored as issued. The prominence of the Van Keulen name caused this chart to be exceptionally influential and a primary source for charts of the region for the subsequent 50 years.