1781 Bellin Map of Carolina and Georgia 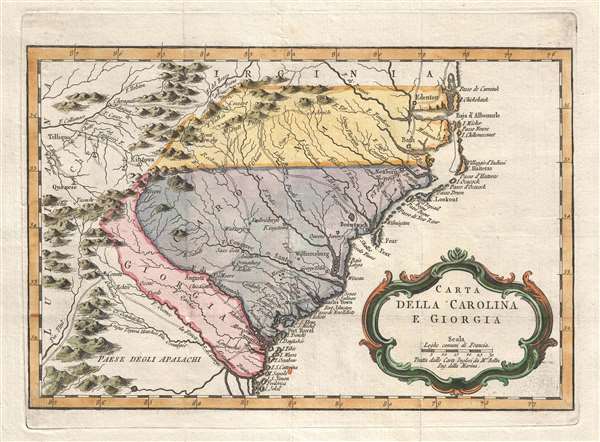 1781 Bellin Map of Carolina and Georgia

A very rare and highly attractive Italian edition of Bellin's map of the Carolinas and Georgia.

This is a rare 1781 Italian edition of French cartographer Jacques-Nicholas Bellin’s 1757 map of the Carolinas and Georgia. It covers modern day North Carolina, South Carolina and Georgia, and parts of Virginia and eastern Tennessee, extending from just north of the Albemarle Sound south to Jekyll Island in Georgia and inland as far as the Appalachians and beyond. Important early cities and towns are depicted, including Savannah, Georgetown, Charles Town, Augusta, Edenton, etc. are identified.

Most likely based on an earlier 1752 map by Emanuel Bowen, this map exhibits the early course of the Tennessee (Callamaco) River. The coastlands are well settled and exhibit considerable European development, nonetheless, only a short distance inland European settlements quickly give way to unexplored lands and the territories claimed by powerful American Indian nations, particularly west of the Appalachian Mountains.

This map was drawn by Jacques Nicolas Bellin and published as plate no. 11 in volume 9 of the 1757 French edition of Abbe Provost's L'Histoire Generale des Voyages.