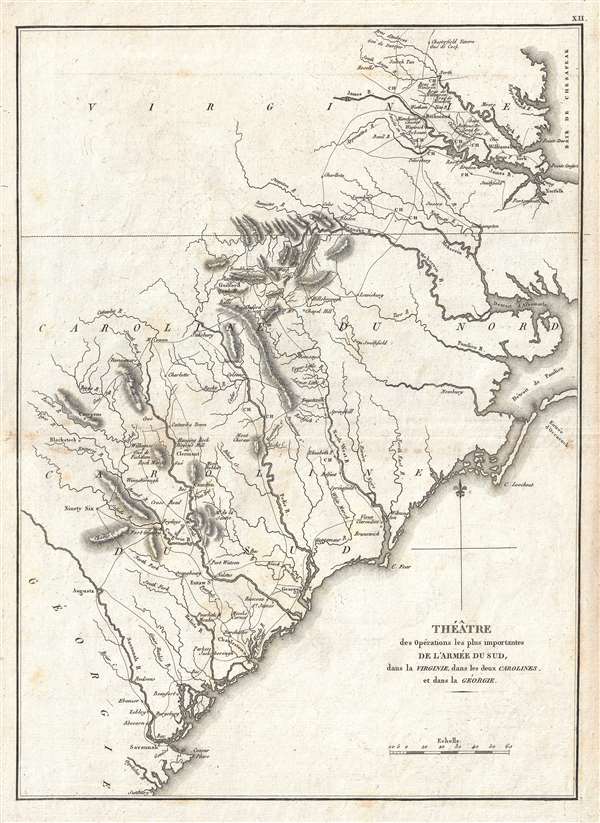 Scarce French map of the Carolina colonies during the American Revolutionary War.

A scarce example of the 1807 map of North Carolina, South Carolina, and Virginia during the Revolutionary War issued for the 1802 French edition of John Marshall's 1832 Life of Washington. The map covers from the Chesapeake Bay and Richmond, Virginia southwards past North and South Carolina to Savannah, Georgia and the Savannah River. Various rivers, major roads, and the sites of important battles are noted.

Marshall prepared this map to illustrate the southern theater of the American Revolutionary War. Towards the end of the War, having suffered major losses in the Northern Colonies, the British began to shift their strategic attention towards the American Southern Colonies. Between 1778 and 1779 the British seized control of several important southern centered including Savannah and Charleston. Backed by a strong loyalist presence, the British where able to maintain control of the primary strategic points in the Southern Colonies until the end of the war in 1783.

This map appeared in atlas volume attached to the 1807 French edition of John Marshall's seminal work, The Life of Washington. Marshall composed the five-volume biography between 1805 and 1807 and based the work on original papers and records provided by the president's own family. The French edition, often considered superior to other editions for its fine highly quality printing, featured a separate folio atlas volume with maps newly engraved by, according to map historian R. V. Tooley, Jean-Nicolas Buache de La Neuville, a prominent French mapmaker in his own right.

Jean-Nicholas Buache de Neuville (February, 15 1741 - November 21, 1825) was a French geographer, cartographer, scientist, and map publisher active in late 18th century Paris. Buache de Neuville was the nephew of the more prominent French geographer Philippe Buache, who held the coveted post of Premier Geographe du Roi. The position meant that Philippe Buache was assigned to tutor the young Dauphin in Geography. Philippe Buache often brought his young nephew, Jean-Nicholas Buache to these secessions where he apparently developed an excellent relationship with the prince. After Philippe Buache's death in 1773 the position of Premier Geographe du Roi fell to J. B. B. D'Anville, who himself died in 1782. Jean-Nicholas Buache, now 41, was in an ideal position to take up the job and canvased his royal friend, now Louis XVI for the position. He became the Premier Geographe du Roi in 1782, beating out such strong competitors as Rigobert Bonne, Didier Robert de Vaugondy, and Edmonde Mentelle. Buache de Neuville compiled maps based upon geographic knowledge, scholarly research, the journals of contemporary explorers and missionaries, and direct astronomical observation. Nevertheless, even in 18th century Paris geographical knowledge was severely limited - especially regarding those unexplored portions of the world, including the poles, the Pacific northwest of America, and the interior of Africa and South America. In these areas Buache de Neuville, like his uncle, Philippe, and primary rival Robert de Vaugondy, must be considered a speculative geographer or 'positive geographer'. Speculative geography was a genre of mapmaking that evolved in Europe, particularly Paris, in the middle to late 18th century. Cartographers in this genre would fill in unknown areas on their maps with speculations based upon their vast knowledge of cartography, personal geographical theories, and often dubious primary source material gathered by explorers and navigators. This approach, which attempted to use the known to validate the unknown, naturally engendered many rivalries. Buache de Neuville's feuds with other cartographers, most specifically Didier Robert De Vaugondy, resulted in numerous conflicting papers being presented before the Academie des Sciences, of which both were members. The era of speculatively cartography effectively ended with the late 18th century explorations of Captain Cook, Jean Francois de Galaup de La Perouse, and George Vancouver. Learn More...


John Marshall (September 24, 1755 - July 6, 1835) was the longest-serving Chief Justice of the United States (1801-35). Marshall's court opinions helped establish the basis for American constitutional law and made the Supreme Court of the United States a coequal branch of government along with the legislative and executive branches. Previously, Marshall had been a leader of the Federalist Party in Virginia and served in the United States House of Representatives from 1799 to 1800. He was Secretary of State under President John Adams from 1800 to 1801. Between 1805 and 1807 Marshall published an influential five-volume biography of George Washington. Marshall's Life of Washington was based on records and papers provided to him by the late president's family. The work reflected Marshall's Federalist principles, and is frequently praised by historians for its accuracy and well-reasoned judgments. Learn More...