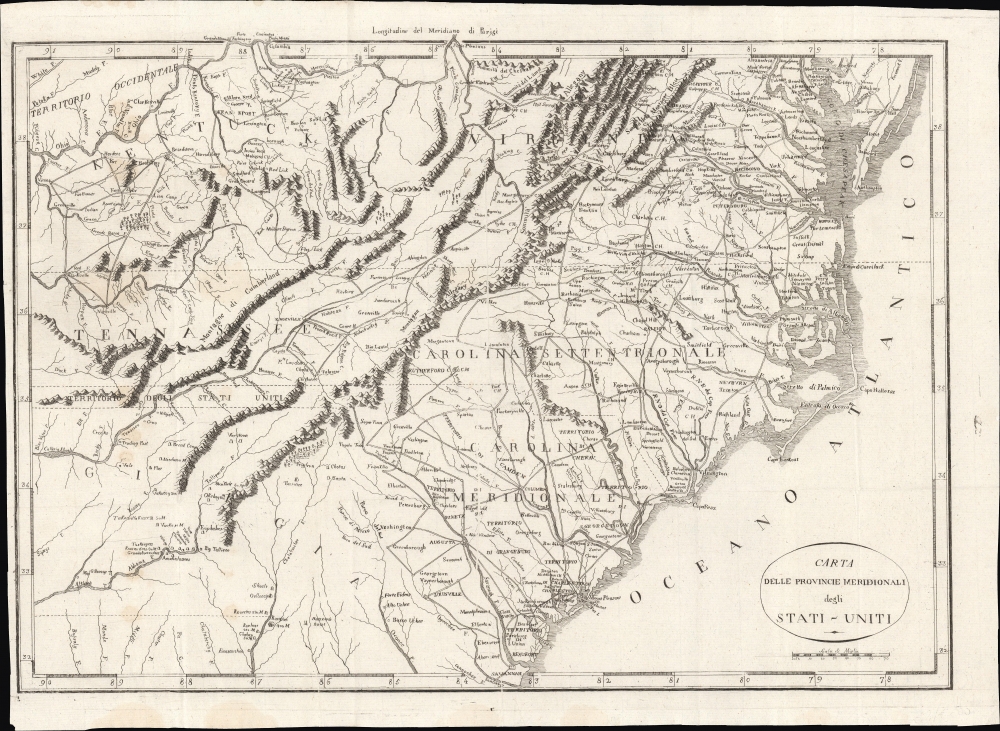 An Italian-language map of the southern United States, very likely based on P. F. Tardieu's map of the same title in French, first published in 1801. It features rich idiosyncratic typography. The map depicts the years just after independence, when the borders of the former colonies, now states, were still forming and the white population of the area gradually moved inland.

Coverage extends from the Chesapeake Bay and the Ohio River south as far as central Georgia, including the modern-day states of Virginia, Kentucky, Tennessee (using the spelling common at the time), North Carolina, and South Carolina, along with parts of Georgia and Alabama. The map is notable for its exceptional detail, naming towns, mills, mines, and roads, as well as surveyed tracts intended to compensate Revolutionary War soldiers for their efforts. Native American settlements are indicated, sometimes followed by numbers, likely referring to the approximate number of people living there.

The careful observer will note an 11-mile-wide strip of land separating Tennessee and Georgia ('Territorio degli Stati Uniti'). This is a legacy of the old coast to coast royal charters upon which the South Carolina and Georgia were initially established. For a time both Georgia and North Carolina claimed this strip of land, although it was hardly disputed, being a remote and mostly unsettled bit of territory. After the American Revolutionary War, when Georgia and South Carolina met at the Convention of Beaufort to negotiate their formal boundary, George ceded the territory. A few months later, South Carolina also ceded the territory, this time to the United States. Georgia at the time, as on this map, was a sprawling territory extending westward as far as the Mississippi River. When Alabama and Mississippi were created, part of this strip was ceded back to Georgia.

This map's publication history is difficult to establish with certainty. It is sometimes attributed to Italian translations of two contemporaneous texts: François Alexandre Frédéric de La Rochefoucauld-Liancourt's Voyage dans les Etats-Unis d'Amérique fait en 1795, 1796 et 1797 and Michel Guillaume de Crevecoeur's Le Voyage dans la Haute Pennsylvania et dans l'État de New-York. The map in the latter text, produced by P. F. Tardieu, appears to have been strongly influenced by the earlier and more obscure map in Rochefoucauld-Liancourt's text. Variations on Rochefoucauld-Liancourt's map appeared in several languages throughout the early 19th century, complicating matters even more (for instance, a similar map with a slightly different title appeared in Carlo Botta's 1827 Storia della Guerra dell'Independenza degli Stati Uniti d'America). However, as Tardieu's map was more widely available (and matches the title perfectly), it is the most likely source of the present map. These complexities make an accurate census difficult; although this map appears on the market occasionally, it is not independently cataloged in any institutional holdings.

Good. Margin trimmed somewhat closely at left. Spots of discoloration at left. Fold lines visible. Wear along edge, particularly at bottom-left.
Looking for a high-resolution scan of this?