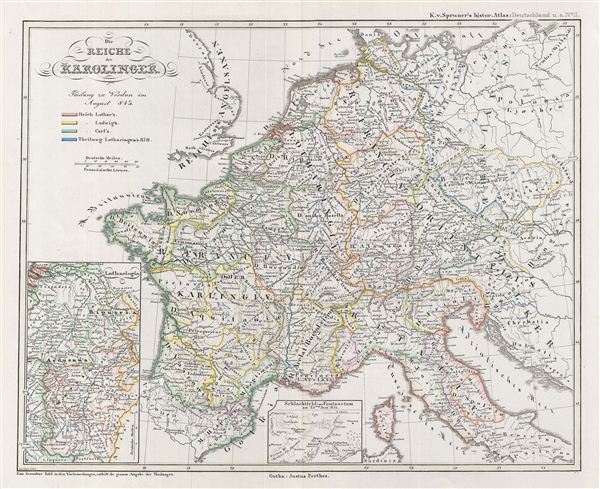 This is Karl von Spruner's 1854 map of the Holy Roman or Carolingian empire. The map covers Charlemagne's empire from modern day Germany to Italy and shows the division at Verdun in August 845. Inset maps on the bottom left corner and near the bottom center margin detail Lotharingia and the June 25, 841 Battle of Fontenoy. The treaty of Verdun, between the three grandsons of Charlemagne, was signed in August 843, ending the Carolingian Civil War and dividing the Carolingian empire into three parts. The whole is rendered in finely engraved detail exhibiting throughout the fine craftsmanship of the Perthes firm. Prepared by Karl Spruner for publication as plate D II in the second edition of Justus Perthes' 1854 Historich-Geographischer, Hand-Atlas zur Geschichte der Staaten europa's vom Anfang des Mittelalters bis auf die Neueste Zeit.