1768 Vaugondy Map of California and Alaska 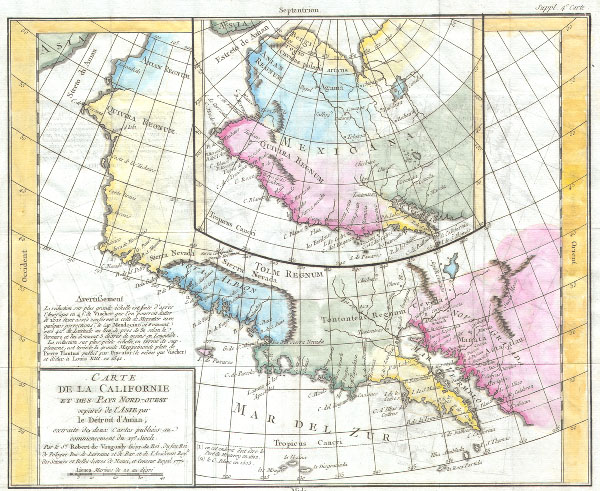 1768 Vaugondy Map of California and Alaska

This is the important Denis Diderot / Didier Robert De Vaugondy map of California. Two maps, the larger depicts the Northwestern part of North America from Anian (Alaska) to Cabo San Lucas. The smaller central map is a larger perspective of the entire region. Both maps are based on the early work of Visscher between 1612 and 1641. The smaller map shows the region free of ice – suggesting the possibility of a Northwest Passage. Lists prominently the supposed American Indian kingdoms of Anian Regnum, Quivira Regnum, the Sierra Nevada, Nova Albion, Tontonteac Regnum, Tolm Regnum. Also includes many costal place names, some of which are recognizable, and some of which are recognizable (C. de San Francisco, Mendocino, Cape Fortuna, etc. ) and other which are entirely mythical. This work is part of the 10 map supplement to Diderot's encylopidia, much of which is dedicated to the Northwestern part of the American continent.