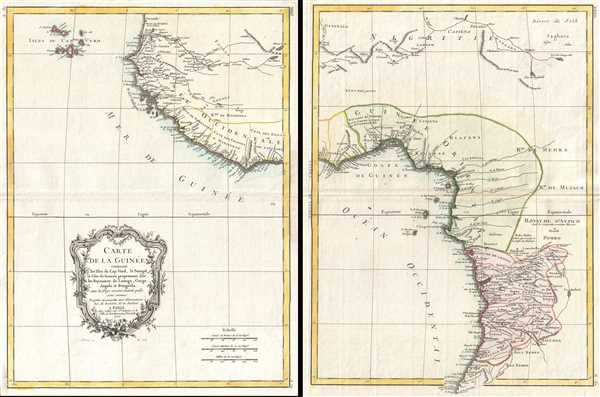 Stunning maps of the coast of West Africa featuring speculative cartography in the interior.
$575.00

A set of Rigobert Bonne's beautiful 1771 maps of West Africa printed on two sheets. The maps depict the region from the Cape Verde Islands eastward along the coast of Africa, past the Bight of Benin (Biafara) to Angola, which includes the modern-day countries of Mauritania, Senegal, Gambia, Guinea-Bissau, Guinea, Sierra Leone, Liberia, Cote d'Ivoire, Ghana, Togo, Benin, Nigeria, Cameroon, Equatorial Guinea, Gabon, Congo, and Angola. As with most early maps of Africa, coastal detail on both sheets is astounding, while the mapping of the interior is speculative at best, or more often simply left blank. On the second sheet, evidence of significant Belgian mapping activities throughout the Congo is included, as are the names of numerous African Kingdoms including Anzico, Mujaco, Bembe, Lubolo, Pemba, Dembi, Calbongo, Bake-Bake, Benin. An attempt is made to map the Niger River as it flows through the 'Desert de Seth' or Saghara, but, as is the case with the rest of the cartography of the African interior, the river's course is based almost certainly on speculation.

These two maps were drawn by Rigobert Bonne and published in the 1771 editon of Jean Lattre's Atlas Moderne.