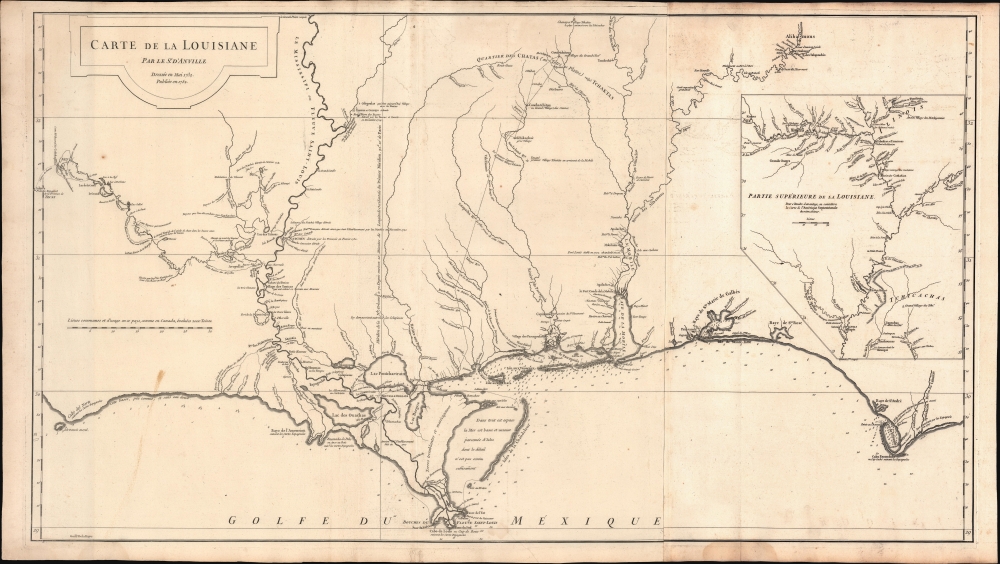 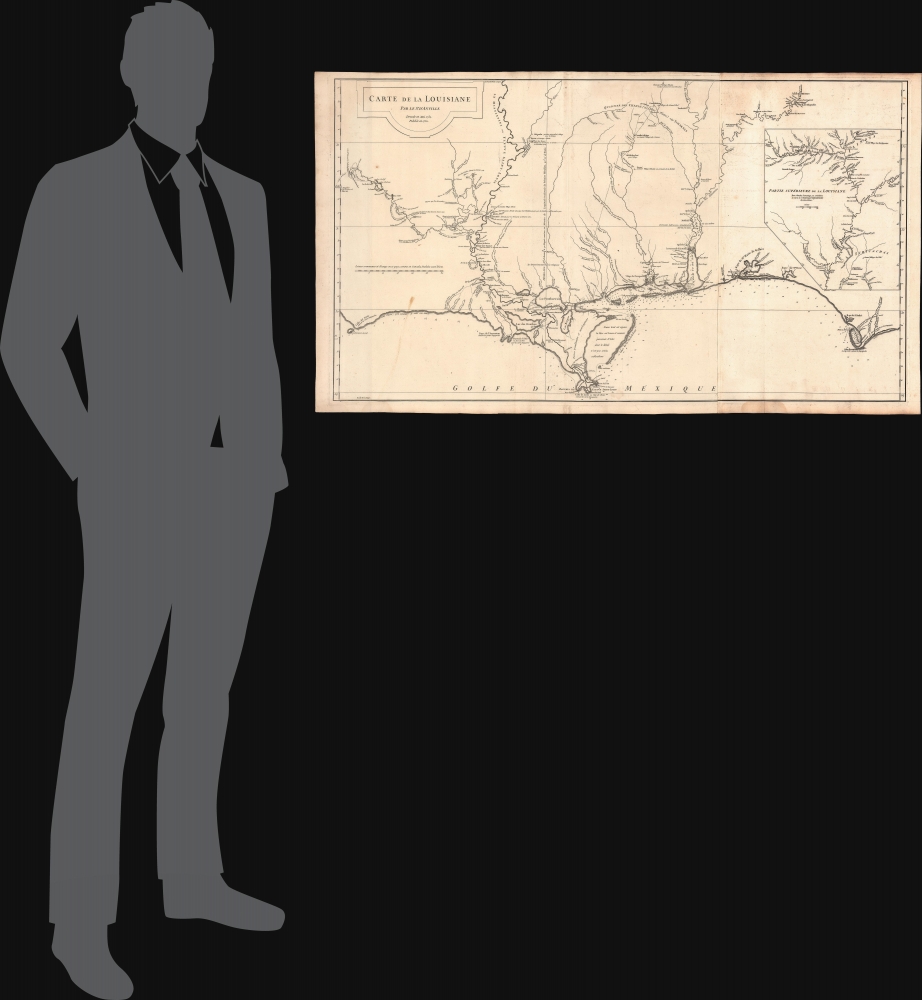 Finest obtainable Colonial Era map of the Gulf Coast around the Mississippi Delta and Louisiana.
$1,800.00

A lovely example of the important 1732/52 map of the Gulf coast and lower Mississippi River Valley by Jean Baptiste Bourguignon d'Anville. The map is significant as the largest and most comprehensive map of the Gulf littoral to appear during the French period of Louisiana.

D'Anville's map covers from Sabine Pass (Cabo del Norte), Texas, past the Mississippi River Delta, Mobile Bay, and Pensacola Bay, to Saint Joseph Bay (Baye de St. Joseph) and Cabo Escondido (Cape San Blas), Florida. The map extends northwards along the Mississippi River as far as, roughly, Lake Providence, and northwards along the Alabama River (Riviere des Alibamons) as far as Fort Toulouse (modern day Wetumpka, Alabama). An inset in the upper right focuses on the upper Mississippi River Valley and includes much of the lower Missouri River as far as the Kansas River (Kansaz). Minimal topography is present as little was known, but the region's river courses, including the lower Mississippi, the Red, the Osage, and the lower Missouri, appear in some detail. Numerous depth soundings are indicated along the Gulf Coast and in the adjacent Bays.

Cartographically much of the coastal information presented here is derived from manuscript work compiled by French Royal Engineer Valentin Devin from 1720 through 1732. Devin's work was incorporated into this map, as well as others by competing French cartographers Philippe Buache, Nicholas Bellin, and Guillaume De L'Isle. Another Royal Engineer, Ignace François Broutin, is responsible for much of the inland cartography, particularly around Natchitoches and Natchez.

Historically speaking, D'Anville drew this map following the 1730 French siege and subsequent destruction of the Grand Village of Natchez. The attack was a retaliatory move following the 1728 Natchez Massacre, in which 229 French colonists settled nearby at Fort Rosalie (depicted) were slain. The war ultimately dispersed the once powerful Natchez Nation. Many of the Natchez diaspora were subsequently absorbed into the Creek and Chickasaw. The Grand Village of Natchez itself re-emerged as a European trading center on the Mississippi.

D'Anville's map is most richly detailed along the Mississippi River, especially the lower Mississippi in the vicinity of New Orleans, on which the map is loosely centered. Throughout Numerous European and American Indian towns and villages are identified throughout, along with both active and abandoned fortifications. Some depth soundings are indicated in Lake Pontchartrain. The Chandeleur Sound is noted as having many little-known islands. The mouth of the Mississippi, with its complex network of channels, is, for the period, well mapped.

The map extends westward along the Red River (Riviere Rouge) as far as Tecas (Texas), the limit of French dominion. Here the French Fort of Natchitoches stands but seven leagues from the Spanish Presidio de San Miguel Arcangel de Linares de Adayes, identified as 'Adayes'. It is not without significance that D'Anville breaks the border of the map to include the Presidio, for just as it is outside the printed area of this map, it is also beyond the boundaries of French influence. The cartography for this region is extracted from Ignace François Broutin's map of 1722.

At the opposite extreme of the map is Fort Toulouse (For des Alibamons or Alabama Fort) at the conjunction of the Coosa and Tallapoosa Rivers, in the country of the Alibamons (from which the name Alabama is derived). The French established Fort Toulouse in 1717 as a bastion against English incursions. Records suggest that the Alabama Indians invited the French, who they perceived as the lesser of two evils, during the 1715-1717 Yamasee War. The Yamasee War was fought between English settlers in South Carolina and various American Indian Nations. The French abandoned Fort Toulouse in 1763.

The inset map in the upper right, although small compared to the rest of the map, offers an interesting perspective on the Upper Mississippi and Lower Missouri Rivers. Here D'Anville has confused the Ohio and Wabash Rivers, presenting them as a single river - an error that D'Anville would correct in his later map Amerique Septentrionale.

An Influence on the Louisiana Purchase?

Though drawn in 1732 and not issued until 1752, twenty years later, D'Anville's Louisiane was among the best and most detailed available large format maps of this region until well into the early 19th century. The map was engraved by Guillaume de la Haye. It was issued in various made-to-order atlases and remained popular due to its accuracy for over fifty years.