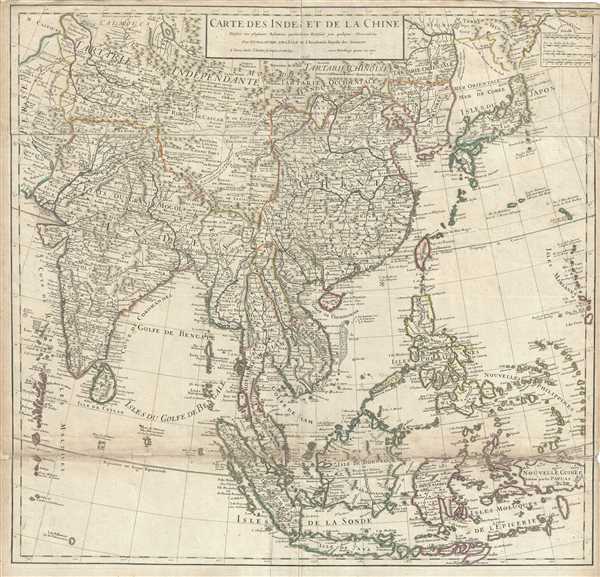 An exceptional 1705 map of the East India Islands by Delisle. Centered on China, Delisle’s map covers from the Caspian Sea to the semi-mythical Terre de la Compagnie and India to New Guinea. It provides extraordinary detail throughout with topography rendered in profile and numerous geographical and political elements identified. It includes the modern day nations of Japan, China, Korea, India, Indonesia, Tibet, Bhutan, Nepal, Thailand, Cambodia, Burma, Vietnam, Laos, Malaysia, Singapore, and the Philippines, among others. The map offers much of note.

Delisle also notes the apocryphal Lake of Chiamay roughly in what is today Assam, India. Early cartographers postulated that such a lake must exist to source the four important Southeast Asian river systems: the Irrawaddy, the Dharla, the Chao Phraya, and the Brahmaputra. This lake began to appear in maps of Asia as early as the 16th century and persisted well into the mid-18th century. Its origins are unknown but may originate in a lost 16th century geography prepared by the Portuguese scholar Jao de Barros. It was also heavily discussed in the journals of Sven Hedin, who believed it to be associated with Indian legend that a sacred lake linked several of the holy subcontinent river systems. There are even records that the King of Siam led an invasionary force to take control of the lake in the 16th century. Nonetheless, the theory of Lake Chiamay was ultimately disproved and it disappeared from maps entirely by the 1760s.

This map was issued by Guillaume Delisle in the 1705 edition of his Atlas de Geographie.