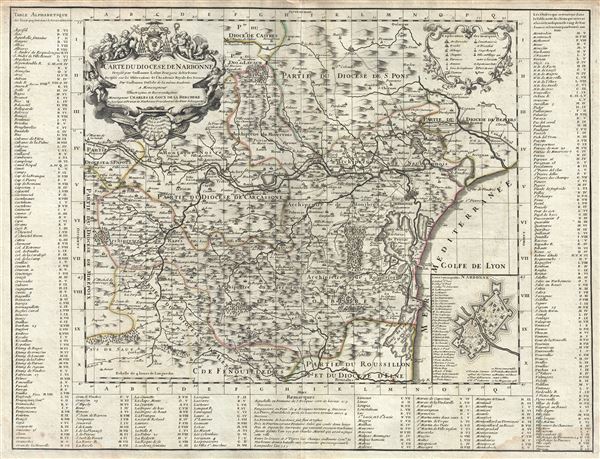 This is a beautiful 1704 map of Narbonne, France by Guillaume De L'isle. It covers the region from Aunat east as far as the Mediterranean and from Saint Pons south as far as Rivesaltes. Includes the French department of Aude and part of the department of Herault. The map renders the entire region in extraordinary detail offering both topographical and political information with mountains and forests beautifully rendered in profile. Considered to be one of the greatest constructions of the 17th century, the Canal du Mudi (or the Canal Royal, as it was known at the time this map was made) is identified.

Part of the L anguedoc-Roussillon region, this area is home to a wide variety of vineyards and is part of the larger Languedoc wine-growing region, the oldest in France. In the east are the wines of Corbieres and la Clape, in the center are Minervois and Cotes de Malpeyre, and in the south, blanquette de Limoux. The red wines produced here are meaty, tannic wines with a deep red color. The area is also known for its production of Pelardon cheese, made from goat's milk, and Perail, a ewe's milk cheese.

an inset of the plan of Narbonne in included in the lower right quadrant of the map. The bottom as well as the left and right sides of the map include notes and an index of localities. A beautiful title cartouche adorns the top left quadrant, with a key in the top right quadrant. This map was created by Guillaume De L'isle in 1704.