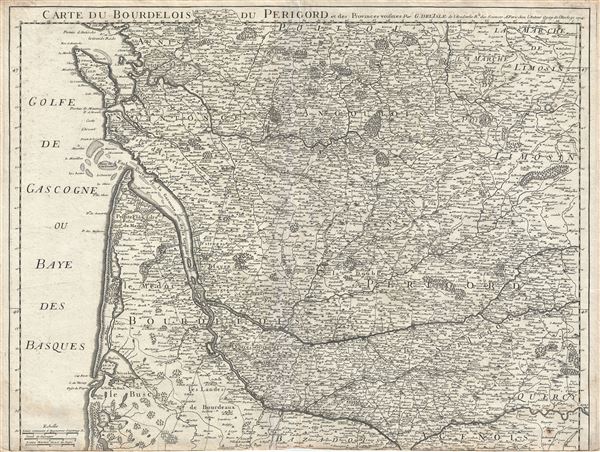 This is an attractive 1714 map of Bourdelois, Gironde, region and the former provinces of Perigord, part of the Aquitaine region of France by Guillaume De L'isle. It covers from La Rochelle, the capital city of the department of Charente Maritime, south as far as Parentis-en-Born (Parentis) and east as far as Brive-la-Gaillarde (Brive). The map renders the entire region in extraordinary detail offering both topographical and political information with mountains and forests beautifully rendered in profile. Identifies the city of Bordeaux in the French coastal department of Gironde.

The Bordeaux region is the seat of the Bordeaux wine region and produces many of the world's finest reds. North of Gironde lies the department of Charente Maritime. This coastal region, bordered by Charente and Dordogne, is best known as the producer of the world's finest Cognacs and Pineau wines. The region of Charente is famous for its production of a wide variety of goat cheeses, such as Chabichou, Mothais, Buche du Poitou, and Chabi. In fact, it produces a third of all the goat cheese in France. The ancient county of Perigord (An important battlefield of the Hundred Years' War between the English and the French), roughly corresponds to the modern department of Dordogne. This area is best known for its production of Monbazillac, a sweet white wine, and Cabecou, a soft goat cheese. This map was issued in 1714 by Guillaume De L'isle.