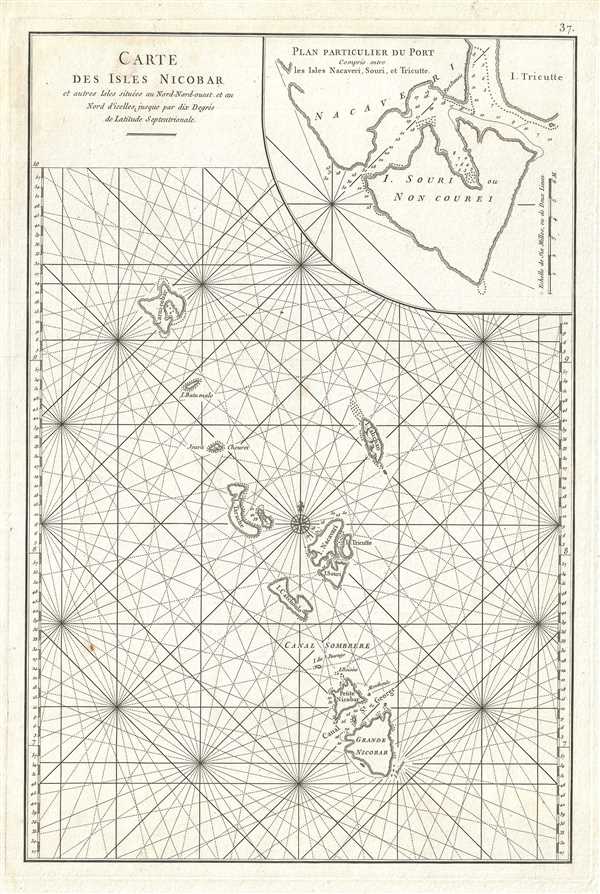 Nautical chart for one of the most isolated archipelagic island chains in the world.
$350.00

This is a beautiful 1775 maritime map or nautical chart of the Nicobar Islands of India. The map covers from the Car Nicobar Island south to the Great Nicobar Island and includes Little Nicobar, Katchal, Nancowry, Trinket Island, Camorta, Tillangchong, Bompoka, Teressa, Chowra, and Batti Malv Islands. The Nicobar Islands in the eastern Indian Ocean is the most isolated archipelagic island chain in the world. A large inset in the top right includes a plan of the ports on the islands of Nancowry, Trinket, and Camorta. Inland detail in minimalist but marine detail is excellent with well-defined coastlines, many rhumb lines, and depth soundings.

Mannevillette's chart marks a considerable advancement over previous nautical maps of this region. This chart was drawn by Jean-Baptiste d'Apres de Mannevillette for publication in the 1775 Neptune Oriental.