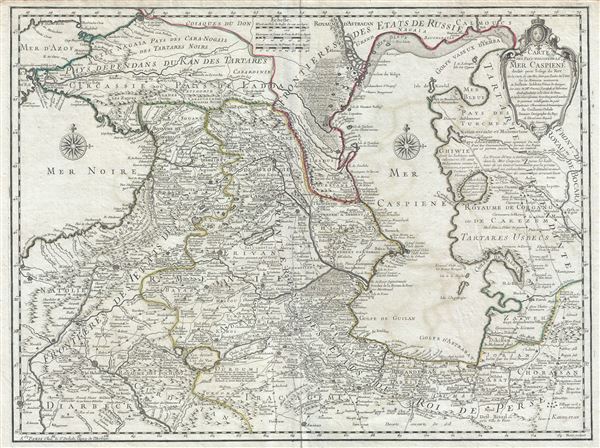 One of the first accurate depictions of the Caspian Sea.
$850.00

This is an attractive 1723 Guillaume De L'isle map of the Caucasus, one of the earliest to place Carl Van Verden and S. I. Soimonov's 1719-21 mapping of the Caspian Sea in the geographical context of the surrounding region. This is one of De L'isle's most important and misunderstood maps. Coverage extends from the Black Sea to Independent Tartary, and from Russia to Persia, inclusive of the entire Caspian Sea, and the modern-day nations of Georgia, Armenia, Azerbaijan, Kazakhstan, Turkmenistan, Iran, and Turkey.

Knowledge of the Caucasus and Caspian Sea region was limited in Western Europe and so Delisle composed this map from assortment of sources, many of which are named in the cartouche, including the Russian explorers, Persian diplomats, Georgian aristocratic and religious figures, and various Russian surveys.

Around 1718 Russian Tzar Peter the Great, sponsored several expeditions to the farthest reaches of his vast empire. One such was a command to map the Caspian Sea given to Dutch navigator Carl Van Verden. Though well known since antiquity, the world's largest lake was largely ignored by surveyors until Van Verden's survey in the early 18th century. Van Verden's work was the most advanced mapping of the Caspian Sea to date, offering a new perspective on the region and opening the navigational possibility of the world's largest lake.

In 1721 Peter presented the French Royal Academy with a copy of S. I. Soimonov and Carl Van Verden's map of the Caspian region,

Without further delay, Delisle redrew the map (with great care), translated the inscriptions into French and printed it on separate sheets in reduced size in the travaux of the Academy. He also included the map in his atlas. In this way, the exact outline of the Caspian Sea, drawn on the Russian map of 1720, first appeared in a map prepared in western Europe. In 1723, Delisle returned anew to the map of Verden and Soimonov and transposed from it the correct outline of 'Caspia' to the map which he was preparing. This can be seen by the outline of Verden and Soimonov on their map of 1720. This point is confirmed by the caption on the map of 1723 which describes it as 'dressee pour l'usage du Roi (Louis XIV) sur la carte de cette mer faite par l'ordre du Czar (Peter I).' The fact that Delisle used a map with Russian names becomes clear from the inscriptions on the map of 1723. 'Dua Brata ou Les Deux Freres,''Ostrov Giloi-Isle Habite,' 'Ostrov Svinoi ou Isle des Cochons,' 'Krasnie Vodi ou Les Eaux Rouges,' and others.

The result is this remarkably accurate map, a major step forward in the cartographic perspective of the region, and one of the finest maps Delisle ever produced. Peter the Great, Russia's most expansionist Tzar, was determined to make the Caspian a 'Russian Lake' and invaded the region in 1722 seizing Derbent and Baku.

This map was engraved by Marin (Marin Desmarest?) and drawn by Guillaume De L'isle in 1723. Appears both as a separate issue an in some De L'Isle atlases.