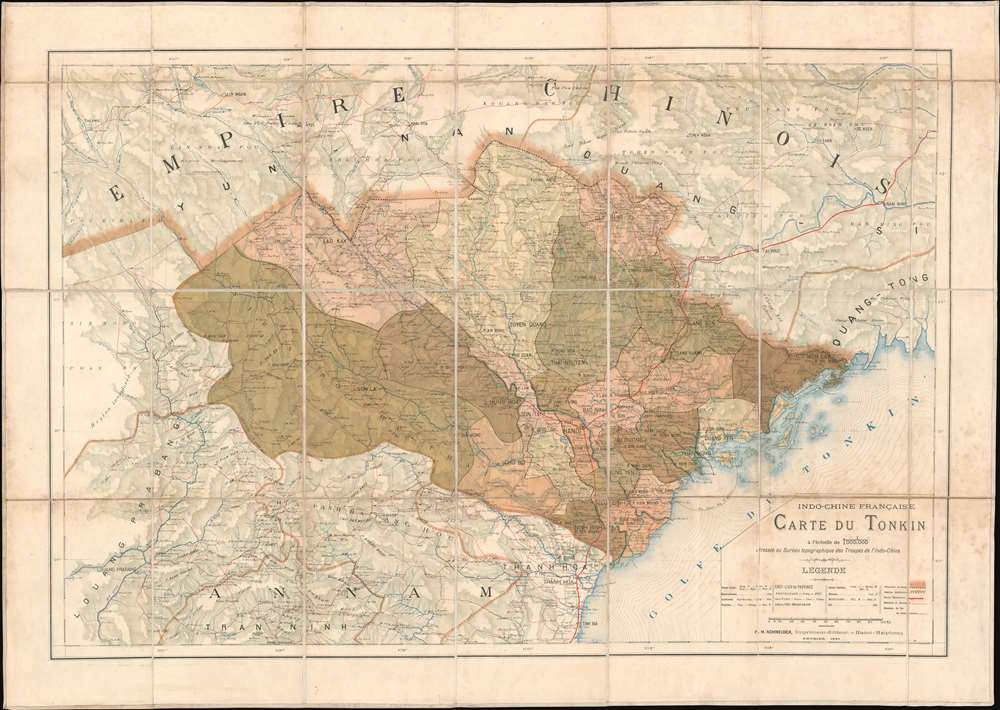 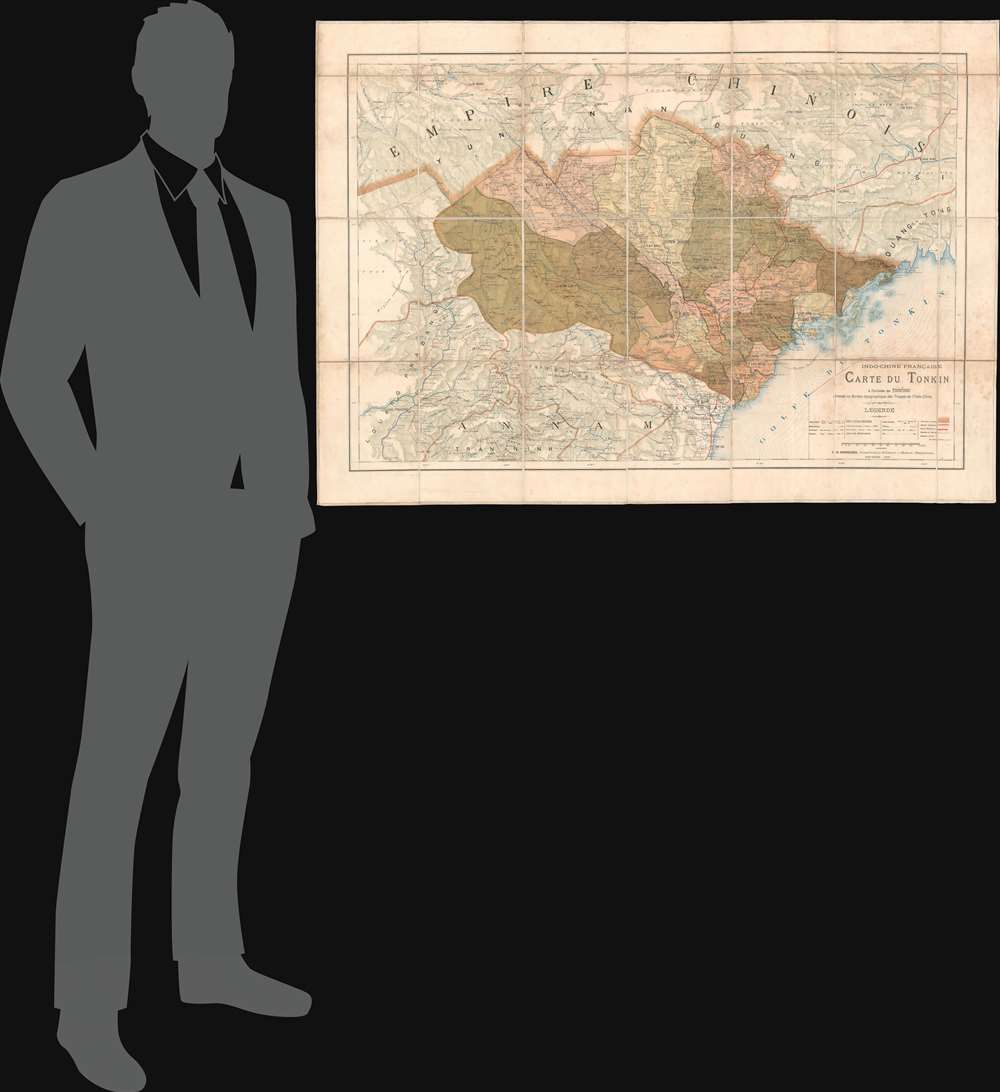 This is an 1891 French Bureau topographique des Troupes de l'Indo-Chine map of Tonkin, Vietnam, Indochina. Depicting a region ravaged by war and still fighting against French occupation forces, the map was issued to provide the newly appointed governor-general of Indochina Jean-Marie de Lanessan, with a comprehensive view of Tonkin. Cities, towns, and villages are identified, and roads are illustrated throughout.

Getting the Upper Hand on the Insurgency

Tonkin had been plagued by violence and war since the French invasion in 1882. In 1891, the French had been waging an ineffective counterinsurgency for the previous five years. Then Jean-Marie de Lanessan (the aforementioned newly appointed governor-general) brought new ideas to the problem. He created structures that allowed military commanders to contain and defeat the insurrection, and appointed officers capable of accomplishing their assigned goals. Two of these men, Joseph Gallieni and Hubert Lyautey, would distinguish themselves in World War I and retire as Marshals of France. The French then embarked on a policy of winning the Vietnamese hearts by proving to them that French occupation was preferable to anarchy. Gradually, the Vietnamese peasants turned their backs on the insurgents, and, without the support of the population, the insurgency slowly dissolved.

The route mandarine is illustrated here by the thick red line running north and south through the region. It was built in the 19th century and connected southern Vietnam (Cau Mau in the Mekong Delta) with Lang Song, near the Chinese border. The common use term, Route Mandarine, evolved because the road allowed easy trade with China (Mandarins) and because it was constructed by Lê Văn Duyệt, a Mandarin Viceroy under Nguyễn Emperor Gia Long. Today, part of Vietnam Route 1 follows the original course surveyed for the Route Mandarine. Railroads under construction are also illustrated.

This map was created by the French Bureau topographique des Troupes de l'Indo-Chine and was printed and published by F. H. Schneider. Two examples are cataloged in OCLC and are part of the collections at the Bibliothèque nationale de France and the Staatsbibliothek zu Berlin.


Jean-François-Henri Schneider (December 1, 1851 - 1929/1930) was a French printer, publisher, and photographer active in French Indochina. The son of a French-German mason, Schneider fought as a volunteer during the defense of Paris during the 1870 Siege of Paris. He arrived in Saigon in 1882 after being recruited to work for the colonial government's printing office. The following year (1883) he was sent to Hanoi to create the Protectorate's printing house and he served as its first director. He resigned in 1885 and that year opened the very successful Imprimerie d'Extrême-Orient with his brother Ernest Hippolyte Schneider, which was the first private commercial printing house in Tonkin. They published postcards from 1885 - 1900. In 1886 he bought the entire printing facility operated by the Protectorate printing house and renamed the examined operation the Imprimerie typographique de F.H. Schneider. Ion so doing, he also secured for himself the contract to print all government papers, which had been done by the Protectorate printing house. Schneider established his own paper factory in 1891. He was also a passionate student of the Vietnamese language and formed great working relationships with local Vietnamese officials. He also edited dictionaries and other manuals in Vietnamese. He received the Legion of Honor in 1903. Schneider served as the director and editor if the Journal officiel de l'Indochine, founded the Revue indochinoise, and served as the director of L'Avenir du Tonkin. Learn More...

Good. Dissected and mounted on linen in twenty-eight (28) panels. Some soiling.