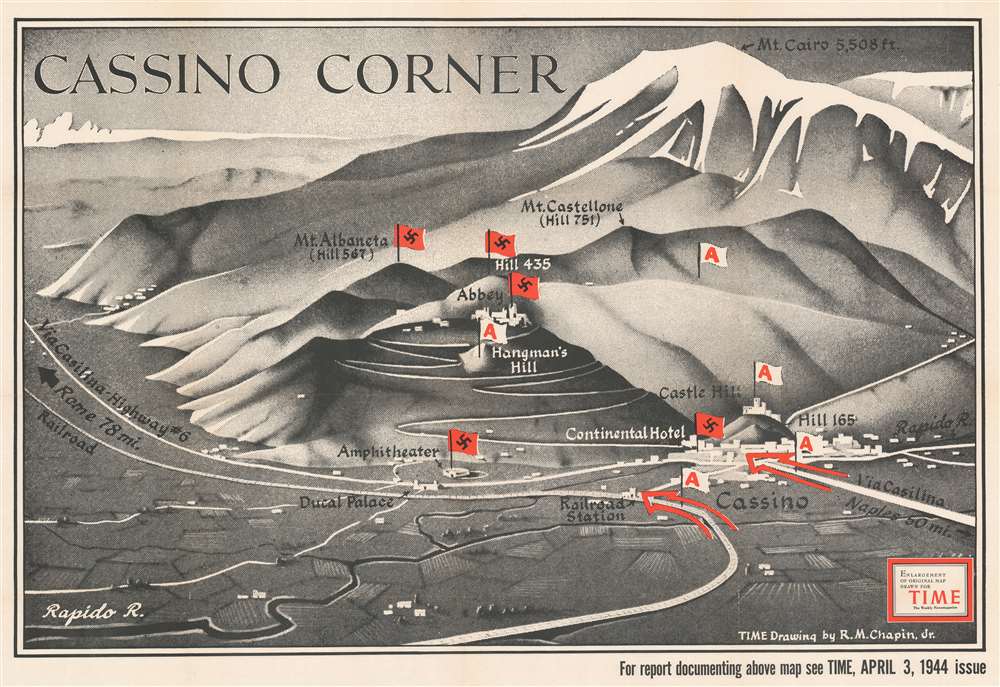 Published between the third and fourth Allied assaults on Monte Cassino, a key strongpoint in German defenses in central Italy.
$700.00

Highlighting the bloody campaign to liberate Italy during World War II, this 1944 Robert M. Chapin, Jr. map of Monte Cassino was published before the Battle of Monte Cassino was decided. Monte Cassino was the lynchpin of the Axis Winter Line, a series of defensive lines that stretched across the Italian peninsula from the Adriatic Sea to the Tyrrhenian Sea. Constructed to defend Rome, the Winter Line withstood Allied attacks from December 1943 until June 1944, when it was finally fell in the face of the fourth Allied assault.

The Battle of Monte Cassino and This Map

Published in April 1944, Cassino Corner illustrates the situation between the third and fourth Allied assaults on Cassino and the Winter Line. The three previous assaults, the first of which was fought in conjunction with the Allied amphibious landing at Anzio, were repulsed by the German defenders. The third battle, fought in March 1944, saw fierce combat at Hangman's Hill, and the abbey on top of Monte Cassino. The Allies captured Castle Hill and the railroad station in this third battle, both of which are marked here with what flags emblazoned with a red 'A'. Hangman's Hill, however, though captured by a regiment of the Gurkha Rifles, was abandoned as the position was too exposed. When this map was published, Allied forces were consolidating their lines and reorganizing their forces by pulling exhausted units off the front line and replacing them with rested men. It would not be until mid-May that the Allies would finally break through the Winter Line and push the Germans back, eventually liberating Rome on June 4, 1944.

This map was created and drawn by Robert M. Chapin, Jr. and published by TIME Magazine in 1944. This example is an enlargement of a map that was published in the April 3, 1944 issue of TIME. The OCLC records examples as being part of the institutional collections at Franklin and Marshall College and the Osher Map Library at the University of Southern Maine.