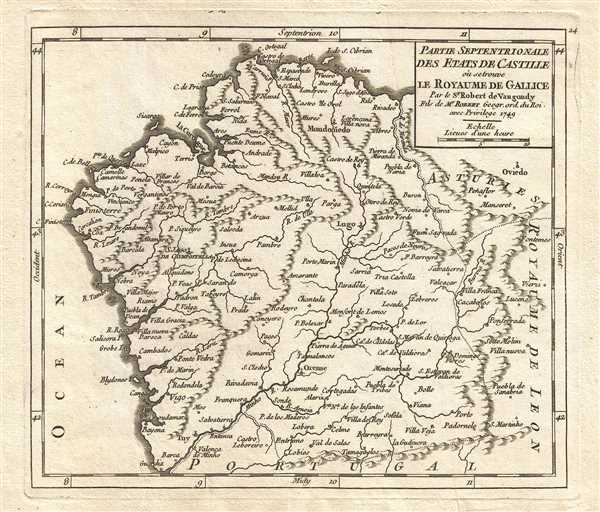 Map of Spain, depicting Santiago de Compostela, the destination of the Way of St. James

This is a 1749 Didier Robert de Vaugondy map of Galicia in northwestern Spain including Santiago de Compostela (S. Iago de Compostella). The map depicts from the Atlantic Ocean to Asturias (Asturies) and the Kingdom of León and from the Bay of Biscay to Portugal. Galicia is an autonomous community of Spain, meaning that it has the right to self-government. Santiago de Compostela is the destination of the Way of St. James (Camino de Santiago), a leading Catholic pilgrimage. Pilgrims travel the route to visit the shrine of the apostle St. James the Great in the Cathedral of Santiago de Compostela, where tradition has it the remains of the saint are buried.

The map itself is highly detailed, epicting rivers and mountains and labeling numerous cities and towns. Several cities, including Santiago de Compostela, Lugo, Mondoñedo, and Oviedo are depicted with crosses, possibly marking them as waypoints on the Way of St. James.