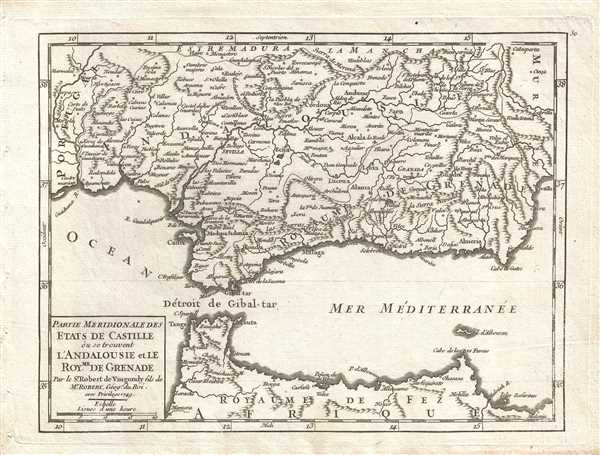 This is a 1749 Vaugondy map of southern Spain and Morocco. The map depicts from the Portuguese border to Murcia and from the border between Andalusia and La Mancha to the Mediterranean coast of Morocco. Andalusia is almost completely illustrated and the Kingdom of Grenada is presented in its entirety. Cadiz is labeled and sits on the Atlantic coast of Spain. Founded by the Phoenicians, Cadiz is the oldest continuously inhabited city in Spain and one of the oldest in Europe. Other Andalusian cities, such as Sevilla, Cordoua, and Gibraltar (Gibal-tar) are labeled, as well as Malaga and Grenada in the Kingdom of Grenada. The Strait of Gibraltar (Détroit de Gibal-tar) is depicted, which connects the Atlantic Ocean with the Mediterranean Sea. In Morocco, known here as the 'Royaume de Fez,' the most famous city present is Tangiers (Tanger), which sits across the Strait from Spain.