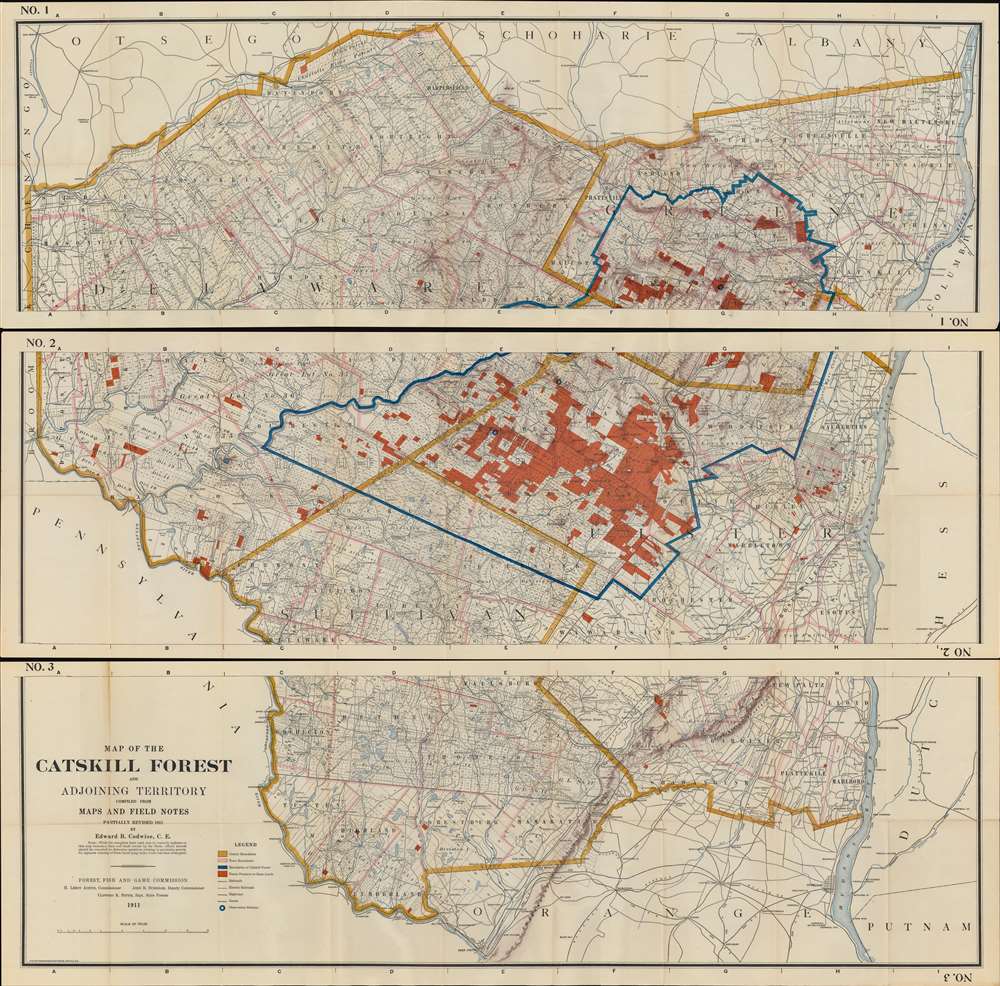 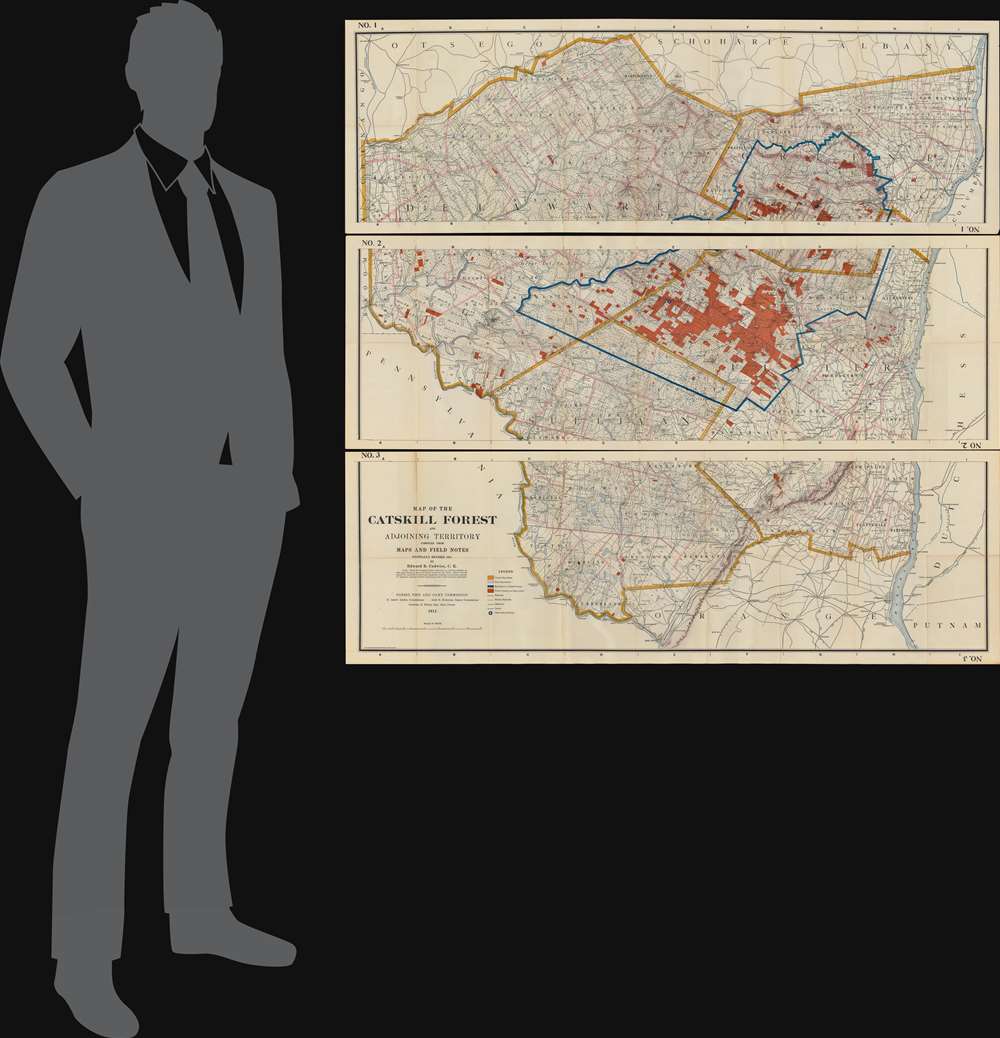 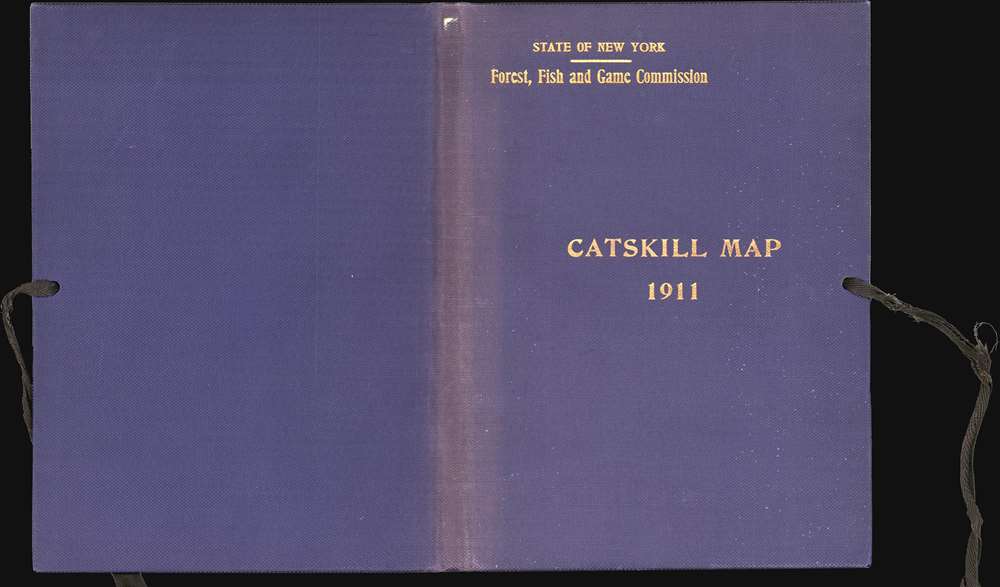 This is the Edward B. Codwise revised 1911 edition of the William Fox map of the Catskill Forest Preserve. It was produced by the New York State Fisheries, Game, and Forest Commission under the supervision of the civil engineer Edward B. Codwise. This mammoth map, printed to three sheets (joinable), is centered on Delaware, Greene, Sullivan and Ulster Counties in New York State, on the west bank of the Hudson River. It shows the boundaries of counties, towns, and individual tracts of land within those counties, with areas of forest reserve highlighted in red. Water routes, roads and railroads are also detailed; streets are named. Mountains are shown pictorially in hachure.

Determining the Limits of the Forest Preserve

Following the 1885 establishment of the Adirondacks and Catskills as 'Forever Wild' forest preserves, the New York State Legislature established a Forest Commission to maintain care and control of the new parks. At the first meeting of this commission, no tabulation of the state-owned lands thus protected existed. In 1893, the State budgeted $1000 for 'examination of title and survey of lands owned by the state on Slide Mountain in Ulster County and other parts of the Catskills...' These surveys resulted in the 'official maps and field notes' thus compiled in the present map.

This map was first issued in 1899 under the title Map of Lands Belonging to the Forest Preserve situated in the Counties of Delaware Greene Sullivan and Ulster. The present edition was updated and revised by Edward B. Codwise for published in 1911. This print was completed by the Matthews Northrup Company. We find just 4 examples of this edition in OCLC.

Edward Bertie Codwise (May 9, 1849 - February 11, 1927) was an American civil engineer active in New York in the late 19th and early 20th centuries. Codwise was born in Elizabeth, New Jersey and lived most of his life in Kingston, New York. He served Kingston as City Engineer from 1902 through 1909, and again in 1916. Between terms as City Engineer, he worked in the Catskill Preserve for the New York State Forest, Fish, and Game Commission. In retirement, he relocated to Morgantown, Wet Virginia, where he died. Learn More...


William F. Fox (January 11, 1840 - June 16, 1909) was an American engineer, historian, and administrator. He became the Superintendent of Forests at the Adirondack Park in New York State. Fox was born in Ballston Spa, New York to a family in the lumber trade, and graduated Union College in 1860, having studied to become an engineer. Soon enough, any career plans were put on hold with the onset of the American Civil War: He joined the 107th New York Volunteers and fought in the War, receiving a commission and advancing in rank as Captain, Major, and Lieutenant Colonel. He would commit his experiences to paper, contributing to postwar efforts to enumerate the horrors of the conflict: His 'Chances of Being Hit in Battle' was published by Century Magazine in 1888, and the following year he published 'Regimental Losses in the American Civil War.' He wrote a three volume history of the action of New York soldiers at the battle of Gettysburg as well as histories of several Union generals. In addition to his writing, Fox would continue in his family's lumber business; he travelled abroad to study modern methods in the trade, and he worked as a forester on behalf of the Blossburg Coal, Mining and Railroad Company in Pennsylvania. In 1885 he became assistant secretary to the New York State Forest Commission, served as Assistant Forest Warden from 1888 to 1891, and became the first Superintendent of Forests upon the creation of the Adirondack Park in 1892. His work as Superintendent provided the basis for the founding of the New York State College of Forestry at Cornell. Learn More...

Good condition. Reinforced splitting at some folds and fold junctures. One tear, from top extending about 3 inches into the map, closed and repaired on verso. Original boards separate. Size noted is for the complete joined map as pictured. Individual sheets measure 15 x 45.5 inches.