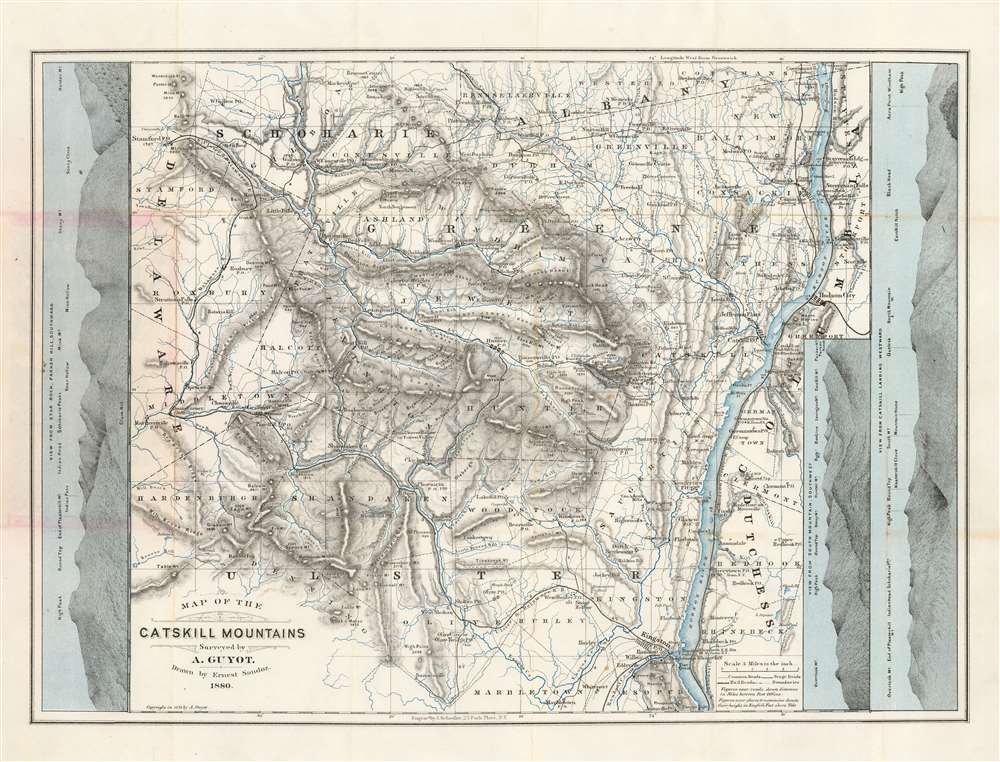 The First Map Specifically of the Catskill Mountains

This is Arnold Guyot's 1879 map of the Catskill Mountains. It is the only early map to focus specifically on the range, and the very first to accurately depict the region, and provide a useful tool for traveling it. The far-ranging Swiss geologist was an inveterate trekker, and his surveys of not only the Catskills but also the lion's share of the Appalachian mountain range were executed personally, on foot. His map provides the elevation above sea level for virtually every peak shown on the map. Prior to his surveys, misconceptions about the Catskills abounded. For example, 'High Peak' had been so named based upon the assumption that it was the highest in the range: Guyot's survey took him far deeper into the mountains than prior surveys, however, and his cataloguing of the less-accessible mountains ranks High Peak only twenty third. Guyot, as he did in his other maps of the Appalachians, resolved epidemic disagreements about place names by relying on the terminology used by the denizens of the region he was mapping - diverging from this discipline on rare occasions where clarity in language called for it (for example, swapping Round Top with High Peak to reflect the reality that Round Top was the higher of the two.)

The map includes three profile views of the mountains: one from Catskill Landing on the Hudson, one from atop South Mountain just west of Palenville, and one from Parker Mountain just north of Tannersville. All three of these vistas were taken from relatively accessible points, and represented views that a reasonably hale traveler could expect to achieve.

The Roads and the Rails

Guyot's map includes a detailed array of the ways a visitor might reach even the inmost parts of the Catskills. Common roads winding through the mountains (sometimes linked to little more than a post office) are shown; stagecoach roads leading to and skirting around the mountains appear as well. Railroads parallel to the Hudson are shown, as is the Ulster and Delaware Rail Road, running from Kingston westward through the southern Catskills before turning north and running parallel to the upper Delaware river.

The map is catalogued in 21 examples in OCLC. It is scarce on the market: we are aware of only four other examples that have appeared in dealers' catalogues or auction records in the past forty years.

Arnold Henry Guyot (September 28, 1807 - February 8, 1884) was a Swiss-American geologist and geographer. Though he intended to join the ministry, during his education he became familiar with the natural sciences, working with close friend Louis Agassiz and forming a connection with von Humboldt. At Agassiz’ urging he studied glaciers in the Swiss Alps, and presented to the Geological Society of France what would be the first important data on glacial motion. He became professor of history and geography at the College of Neuchâtel. On its closing, he emigrated to the United States with his mother, sister and nephew, the draftsman Ernest Sandoz. There he would become a lecturer, first at the Lowell Institute, and later as a professor of geography and geology at Princeton. During his professorship he worked for the Smithsonian Institution in order to develop a national meteorological system, which would result in the formation of the United States Weather Bureau. He was accompanied in his emigration by his produced a number of text books, as well as a series of educational wall maps. Guyot produced maps in conjunction with his nephew from about 1857 to 1881. His work with Sandoz included the first detailed maps of the Catskills and the Southern Appalachians. Learn More...


Ernest C. Sandoz (1830 - April 6, 1908) was a Swiss-American draftsman and cartographer. He was nephew of the geologist and geographer Arnold Henry Guyot, and emigrated to the United States with his uncle, mother and grandmother in about 1848. While nothing is known of his early education, it is clear that he followed Guyot as long as his uncle lived, working with him throughout his career. Guyot, in his last will and testament, bequeathed rights to his wall maps and the map of the Catskills to Sandoz ‘who has been, during so many years, for me as an affectionate son and a constant help.’ Sandoz is credited with no fewer than twenty maps, the vast majority of which were under Guyot’s direction. In spite of this, Sandoz’s draftsmanship does not appear to have been his only labor: his September 14, 1863 draft registration lists his profession as ‘Gardiner.’(sic.) Learn More...


Joseph Schedler (April 22 1813 - December 12, 1887) was a New York based engraver, printer, lithographer, and globe maker active from about 1850 to at least 1889. Schedler was born in Germany and immigrated to the United States, a Forty-Eighter fleeing the German Revolutions of 1848-1849. He was active from at least 1850 when he partnered with fellow German immigrant, the landscape artist, painter, and engraver, Theodore August Liebler (1830 – 18??), to found the lithography firm of Schedler and Liebler, 129 William Street. The firm completed engraving work for J. H. Colton as early as 1852 but probably dissolved by 1854. Schedler filed a patent in 1878 for a crystallotype machine, a device the employed electrotyping to print textured crystalline surfaces. He is best known today as a globe maker. Joseph Schedler's globes won prizes at the Paris International Exhibition in 1867, the American Institute Fair in 1869 and the Vienna International Exhibition in 1873. From at least 1876 records suggest he relocated to Jersey City, New Jersey. Schedler's son, Herman, was also a globe maker, and inherited his father's business sometime around 1877, producing globes will to about 1901. Learn More...