1811 Reinecke Map of the Caucasus, Armenia and Georgia 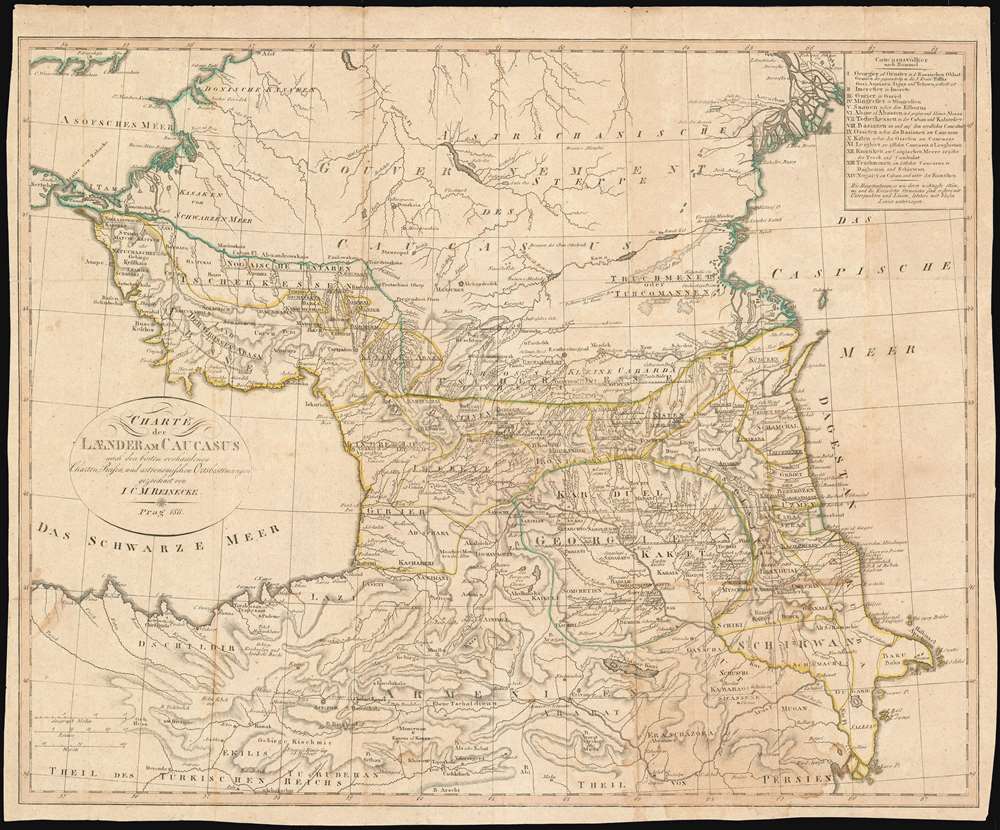 1811 Reinecke Map of the Caucasus, Armenia and Georgia

Georgia, Armenia and Azerbaijan during the Russo-Persian War.
$550.00

This scarce 1811 map of the Caucasus depicts the borderlands between the Russian and Turkish Empires, focusing on the area that Persia would ultimately cede to Russia in the 1813 treaty of Gulistan. Most of this region – made up of northern Armenia, Dagestan and Azerbaijan – was by the time of this map's production Russian in all but name, while Russian suzerainty over the areas outlined in green - the vicinity of Derbent, and Georgia - would not be finalized until the 1813 treaty. Broadly illustrating the political limits of the Russian and Turkish Empires (in contemporary outline color), dozens of neighboring peoples of the Caucasus appear as well. Reinecke’s map was far and away the most sharply detailed map of the region available of its day, not as much for its topography as for its granular ethnological detail. The complex history of the cross-settlement of the region is made evident in the multiplicity of named peoples present here. It is unsurprising that the historian T. F. Ehrmann should have included it in his Neueste Kunde von Asien, an exhaustive description of Asia and its peoples. For the 1812 Prague edition of the book the map was re-engraved, including a table cataloging the ethnicities of the Caucasus according to the 1804 work of German historian and philologist Dietrich Christoph Rommel, which postdated the engraving of the Weimar plate of this map and would have been considered more authoritative.

Examples of several Weimar editions of this map in are cataloged in OCLC, but none of this Prague edition. Ehrmann’s 1812 Prague edition of Neueste Kunde von Asien, in which this map appeared, does appear in 9 institutional collections.

Johann Christoph Matthias Reinecke (October 9, 1770 - November 7, 1818) was a German polymath, known for his contributions to cartography and paleontology. A polymath, he wrote poems, novels and songs, understood eight languages ​​and produced works in botany, zoology and geography, which he illustrated himself and for which he drew maps. He also designed and drew 22 maps for the Geographisches Institut zu Weimar's 'Allgemeiner Hand-Atlas der Ganzen Erde'. As a paleontologist, he described 37 new ammonite species of the Jurassic and produced oa 400 page catalogue of the fossil collection of prince Franz Friedrich Anton of Saxonia Coburg Saalfeld (1750-1806). Learn More...

Very good. Water stain to lower right hand quarter still an attractive example.
Looking for a high-resolution scan of this?