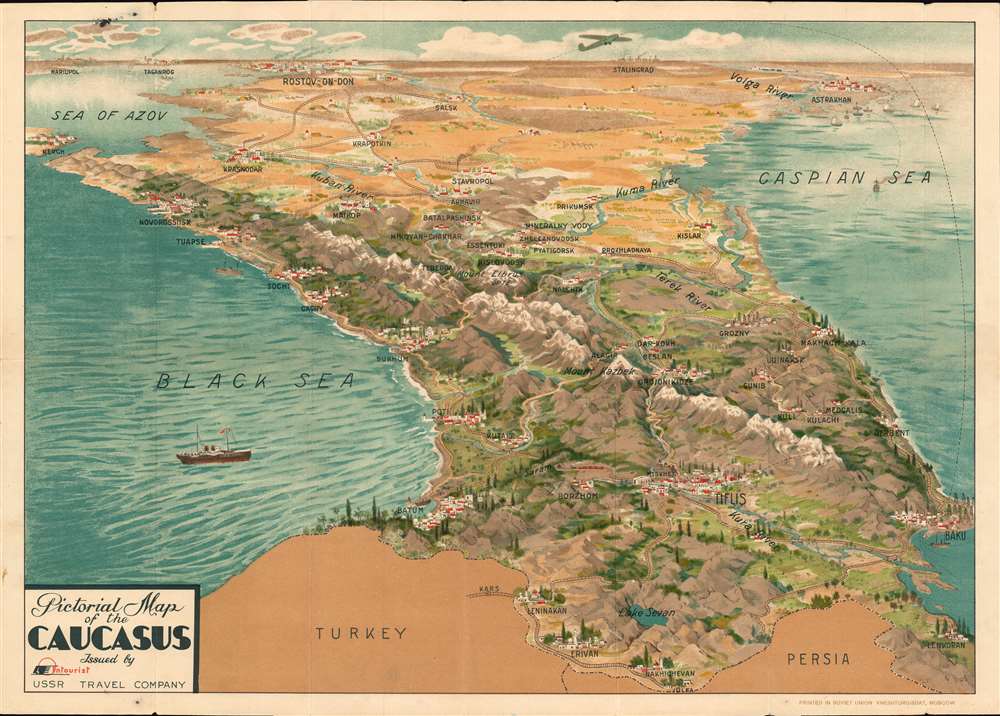 This is a beautiful c. 1930 Intourist U.S.S.R. Travel Company pictorial map of the Caucasus. The map is most intriguing as while clearly a tourist-focused piece, the English-speaking audiences for whom it was intended are mysteriously absent. The English only established normalized relation with the USSR a year before, and the Americans had not. Moreover, this map appeared at the height of the Great Depression, when global travel dropped to a trickle.

Printed in English, the map depicts the region from the Sea of Azov to the Caspian Sea and from Stalingrad (which had only recently been christened with that name) to Turkey and Persia. Cities, towns, and villages, including Astrakhan, Rostov-on-Don, Tiflis (the pre-1936 name for Tbilisi), Sochi, and Baku, are identified. The region's stunning mountains and beaches are illustrated, along with the railroad connecting Tbilisi and Baku with the rest of the Soviet Union. Ships ply the waters of the Black Sea and the Caspian Sea, and an airplane flies from beyond the horizon to Baku and Tbilisi. A previous owner's name is written in pencil on the verso and appears to be Beatrice Manley. We have been unable to trace this any further.

The fact that this map is printed in English is intriguing, since Britain only established normal relations with the Soviet Union in 1928 - 1929, and the United States would not do so until 1933 - 1934. This is also the period of Stalin's first five-year plan, which was implemented in 1928. Stalin's reforms focused on rapid industrialization and the collectivization of agriculture. The glaring question concerning this map, and to which there is no clear answer, is who was the target audience for this piece, given that the Great Depression and the first five-year plan were ravaging the global and Soviet economies. That reality, coupled with the fact that the Caucasus were, and still are, a relatively remote part of the world, makes one wonder 'who were the tourists flying on that plane from beyond the Soviet horizon to Baku and Tiflis?'

This map was created and published by Intourist c. 1930 and printed in the Soviet Union. This map is not cataloged in OCLC, and we are aware of only one other example in private hands.

Intourist (April 12, 1929 - Present) was the official tourism agency in the Soviet Union and was responsible for welcoming all foreign tourists to the U.S.S.R. and providing them with guides. Intourist was founded by the People's Commissariat of Commerce, the People's Commissariat of Railways, and the Sovtorgflot merchant fleet, and its name is a contraction of inostrannyj turist (foreign tourists). Its first foreign office opened in London about 1930, and locations in Amsterdam, Berlin, and New York soon followed. Intourist 'owned' hotels and other important tourism related businesses throughout the Soviet Union, but, since they were owned by the Soviet government, Intourist itself never truly owned anything. Privatized in 1992, a majority share (50.1%) was owned by the British Thomas Cook Group from 2011 until the group collapsed in September 2019. it was then acquired by Anex Tours, a company based in Turkey, in November of that year. Learn More...

Very good. Chromolithograph. Attached to original binder.
Looking for a high-resolution scan of this?