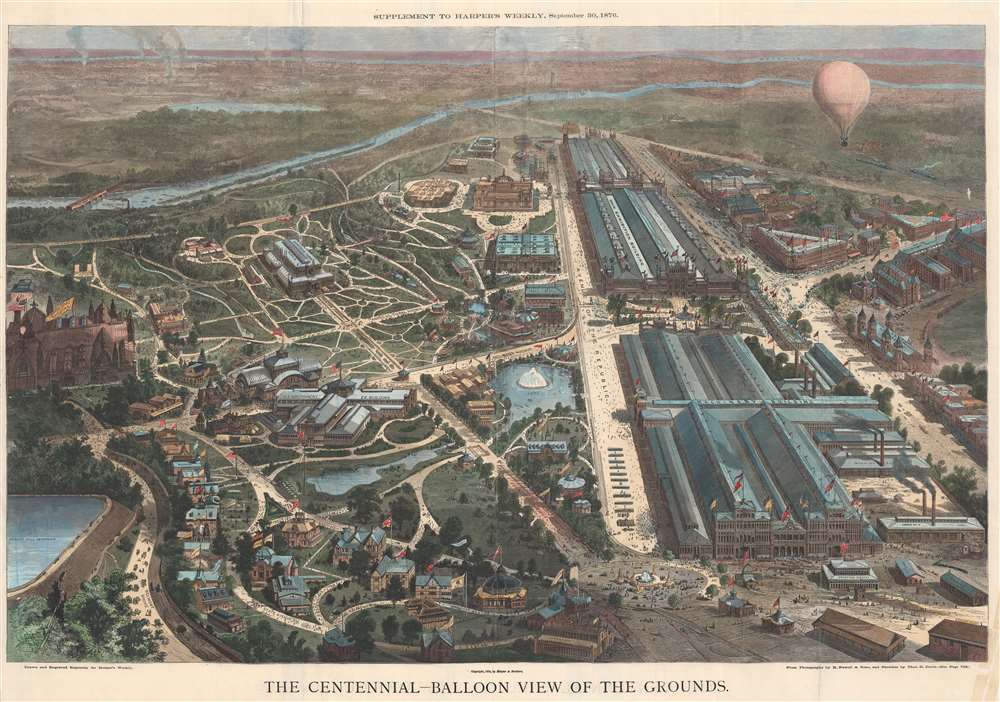 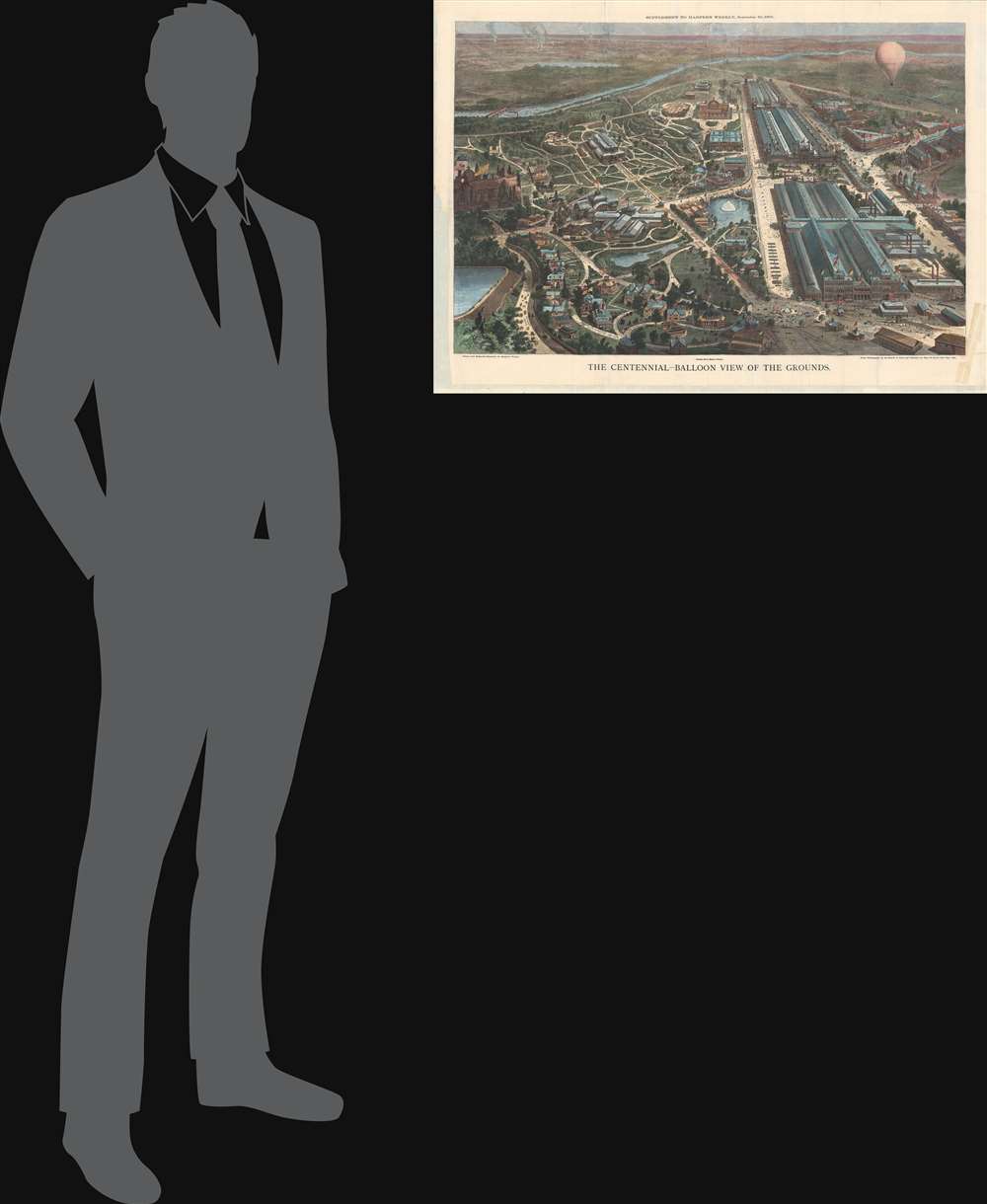 This spectacular bird's-eye view of the 1876 Philadelphia Centennial Exposition appeared as a special supplement to Harper's Weekly on September 30, 1876. Taking in the entire grounds, it displays the grand scale and vast ambitions of the exposition.

This view looks eastward over the Fairmount Park exposition grounds, with the Schuylkill River and Philadelphia in the background. It depicts the nearly 200 pavilions and other structures of the exposition, representing individual U.S. states, foreign countries, various branches of science, specific industries, and even individual companies, including Harper's rival Frank Leslie's Illustrated Newspaper. In addition, restaurants, hotels, 'public comfort' structures, cigar stands, multiple railways, a police station, a zoo, and more were built to ensure visitors' contentment and entertainment.

As the stature and scale of the event grew during its planning stage, the effort and funds put into individual structures and displays increased accordingly. For example, the Women's Pavilion towards the left in the foreground, was a novelty among international expositions, reflecting both the vital role played by the high-society women of Philadelphia in planning the exposition and their advocacy for improving women's social station. The Japanese Government pavilion in the foreground stood out among the national pavilions. As an Asian nation that in the early days of a rapid industrialization drive, Japan was eager to join the exposition on equal terms with Western nations. Considerable expenses were set aside to ensure the success of the pavilion, which focused on Japanese traditional culture, attracting great interest from visitors.

Officially named the International Exhibition of Arts, Manufactures, and Products of the Soil and Mine, the Centennial Exhibition (or Exposition) opened May 10, 1876, and closed on November 10, 1876. Nearly ten million people attended the exhibition, including President Ulysses S. Grant and Brazilian Emperor Pedro II, who officially opened the fair. Among the exhibits were the Statue of Liberty's right arm and torch, the John Bull steam locomotive, and the Swedish Cottage, which is now the Swedish Cottage Marionette Theatre in New York City's Central Park. Many inventions and innovative ideas were displayed, including a telephone, typewriter, and a predecessor to the electric lightbulb, heralding the onset of the 'Second Industrial Revolution.'

This view was drawn and engraved as a supplement to Harper's Weekly, based on photographs and sketches by R. Newall and Sons and Theodore R. Davis, respectively. It is held by roughly a dozen universities, research institutions, and museums, and is scarce to the market. Of the known examples of this view, most are black-and-white, with hand-colored examples like this one being especially rare.


Theodore R. Davis (July 22, 1841 – November 10, 1894) was an American artist-correspondent and illustrator active in the later part of the 19th century. Much of his work was prepared for and published by Harper's Weekly. Davis is best known for his many drawings of important military and political events during the American Civil War, in which he was twice wounded. Although a northerner, throughout the war he traveled incognito throughout the Southern States in the party of the London Times correspondent, Britisher, William H. Russell. After the war Davis continued to work for Harper's covering the Reconstruction and the Westward Expansion. He was the first to document the Sioux Indians in 1865, observed General Custer during the Indian Wars in 1867-68, and traveled with Winfield Scott Hancock’s failed Indian Peace Expedition. In retirement he wrote a treatise titled, "How a Battle is Sketched." His remains are interred at Hazelwood Cemetery, Rahway, New Jersey. Learn More...

Good. Backed on tissue for stability. Small areas of loss at fold intersections.