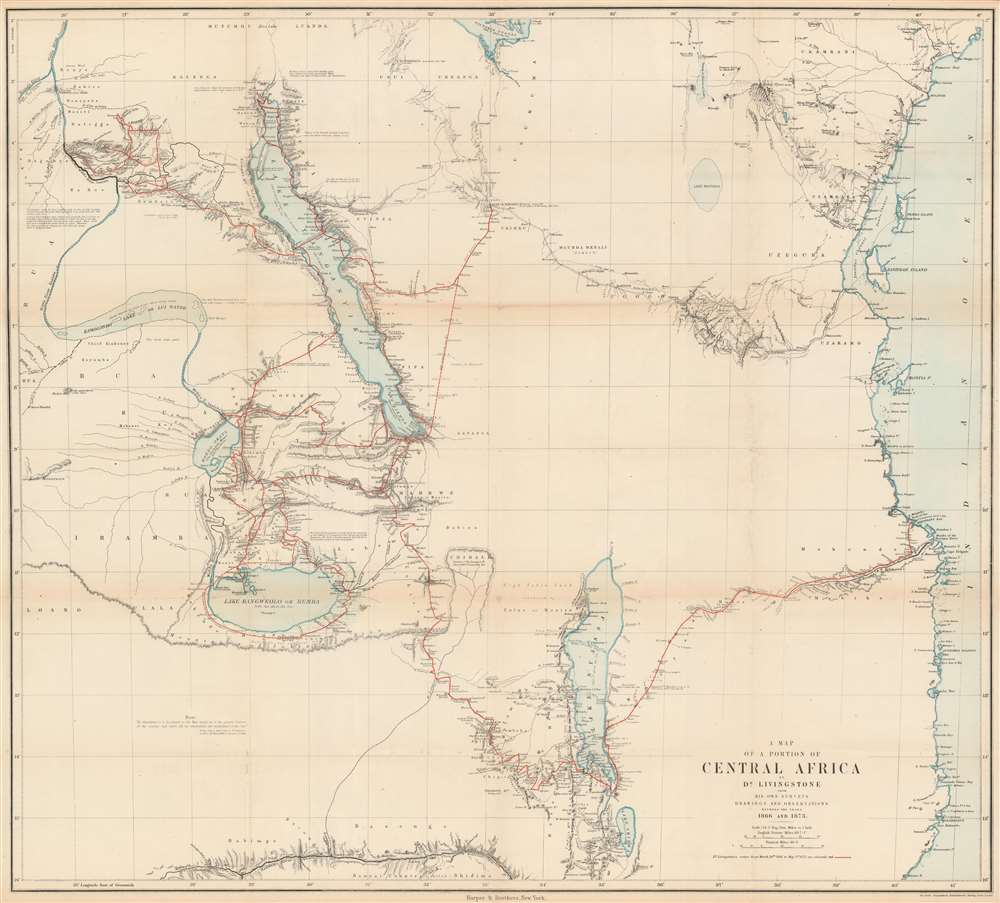 A groundbreaking map of central Africa published from David Livingstone's personal notes after his death.

This is an 1875 David Livingstone map of central Africa. The map depicts the region of central Africa from the Lualaba River to the Indian Ocean and from Lake Victoria to Lake Shirwa and part of the Zambezi (Zambesi) River, where Livingstone spent the years of 1866 until his death in 1873 along the southern shore of Lake Bangweolo. Dr. Livingstone's route during these years is traced in red, with Livingstone's comments on the landscape interspersed throughout, along with dates when he visited certain locations. Routes of other famous explorers, including Speke and Grant in 1860 and 1861, Burton and Speke in 1857 and 1858, Henry Morton Stanley in 1871 and 1872 on his famous expedition to find Livingstone, and even Livingstone himself in 1859 and 1861, are traced by black dashed lines. Curiously, only part of the journey made by Livingstone's aids Chuma and Susi, following his death in 1873 to bring his journals, maps, and physical remains to the coastal city of Bagamoyo, is illustrated.

In 1866, Livingstone returned to Africa for the third time. This time he arrived in Zanzibar to lead an expedition to find the source of the Nile. It was commonly believed that its source was either from Lake Albert or Lake Victoria, but Livingstone believed that the source was further south and assembled a team of freed slaves, Comoros Islanders, twelve Sepoys, and his two servants from his previous expedition Chuma and Susi. This team quickly melted away and stole most of his supplies, including all his medications, leaving him with only his loyal servants. This small group spent the next eight years exploring central Africa, detailing Lake Mweru, Lake Banweulu, and the Lualaba River. Livingstone spent most of these years terribly ill and was forced to rely on the help of Arab traders and slavers on multiple occasions. Livingstone's 'Last Journals' were published posthumously for the first time in 1874. His continually dedicated servants, Chuma and Susi were responsible for saving the manuscripts and bringing them out of the African interior.

This map was created by David Livingstone and published posthumously with his 'Last Journals'. The present example was published by Harper and Brothers with the first American edition in 1875. We have been unable to locate any other examples of this edition of the map in institutional collections or on the private market although the book does appear occasionally.

Dr. David Livingstone (March 19, 1813 - May 1, 1873) was a Scottish physician, an explorer of Africa, a pioneer Christian missionary with the London Missionary Society, and one of the most beloved British heroes of the late 19th century. Livingstone is renowned worldwide and has been written about extensively, so we will only provide a short summary of his achievements here. Livingstone first arrived in Africa in the arly 1840s and served in numerous posts as a missionary for the London Missionary Society. In his gradual move northward from South Africa, Livingstone found himself in the village of Liyanti on the banks of the Zambezi River in 1851. Livingstone spent the next two years exploring the Zambezi, eventually becoming the first European to see the Mosi-o-Tunya waterfall, now known as Victoria Falls in the West, which Livingstone named for Queen Victoria. He then returned to Britain, where he resigned from the London Missionary Society in 1857 to pursue scientific exploration and opening Central Africa to commerce, mostly in an effort to end the African slave trade. Livingstone left that same year to lead the Second Zambesi Expeditionl which turned into a nightmare because of his poor leadership skills. Nonetheless, this expedition was the first to reach Lake Malawi, but was unable to achieve the stated goals of the expedition of opening the African interior to trade because the Zambezi and Ruvuma Rivers proved impossible to navigate with large vessels. He was ordered by the British government to return home in 1864 due to rising costs and failure to achieve the stated goals of the expedition. Livingstone returned to Africa in 1866 with the stated goal fo finding the source of the Nile. He would spend the rest of his life on this mission and never find success. During these years Livingstone was almost constantly sick adn suffering. He died on May 1, 1873 in Chief Chitambo's village at Ilala, southeast of Lanke Bangweulu in present-day Zambia, of malaria and internal bleeding due to dysentery. Livingstone's explorations in central Africa were truly groundbreaking. He was the first to identify Lake Ngami, Lake Malawi, and Lake Bangweulu to Western science, along with Victoria Falls. He also provided previously unknown details of Lake Tanganyika, Lake Mweru, and numerous river, the most important of which was the upper Zambezi. His explorations filled in many portions of the map that had previously been left blank. Learn More...

Very good, uncommonly so. Typically we find examples of this piece to be in poor condition. This example has some wear and toning along the original fold lines and a few minor verso repairs and reinforcements at fold intersections.