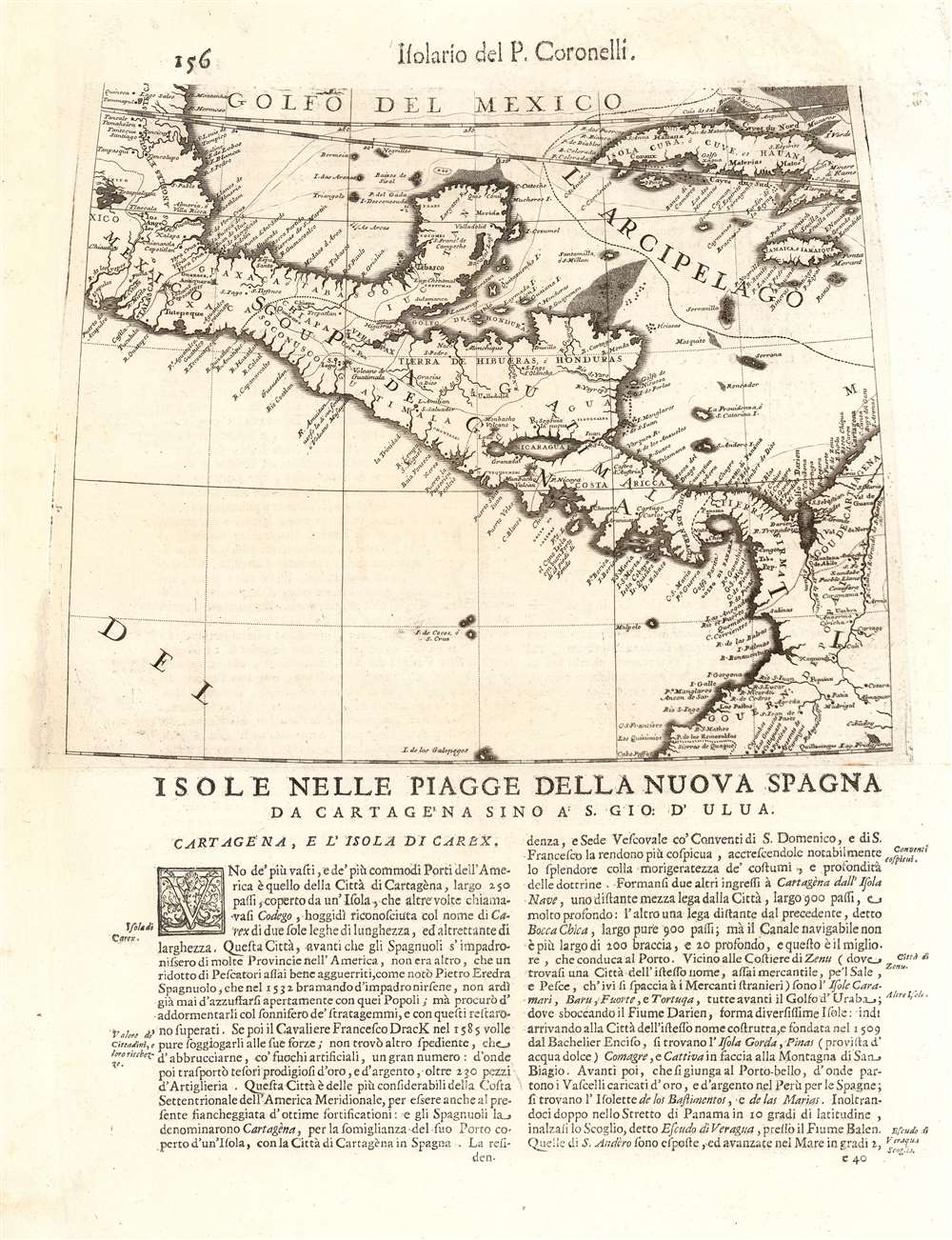 This is Vincenzo Coronelli's 1696 map of southern Mexico and Central America, printed from his globe gore focusing on the Americas.

The full plate, engraved in 1688 for Vincenzo Coronelli's 42-inch (3 1/2 foot) terrestrial globe, was masked off for reprinting in his 1696 Libro dei Globi and Isolario. This beautiful engraving presents the portion of the gore spanning from the Equator to the Tropic of Cancer. It thus reveals the region comprising northern Ecuador and western Colombia, Panama, Costa Rica, Nicaragua, Guatemala, El Salvador, Honduras, Belize, and southeastern Mexico. The western Caribbean is also presented, including most of Cuba, as well as Jamaica and the Cayman Islands. Mexico City and Lake Texcoco appear at the northwest limit. Four volcanoes are illustrated and named, including Mexico's Popocatépetl, and Guatemala's Volcán de Fuego. Two of Nicaragua's volcanos appear south of Lake Nicaragua: Mombacho (Munbacho) and Momotombo (Monbacho).

Coronelli's first use of this geography was his monumental 15-foot manuscript terrestrial globe made in 1683 for Louis XIV. Its details can also partially be found in Coronelli's two-sheet maps, America Settentrionale and America Meridionale. However, no other Coronelli maps focus specifically on Central America.

Coronelli's 1688 globe, the Libro Dei Globi and other Publications

Coronelli firmly established his reputation as a globe maker in 1683 when he created an astonishing pair of enormous manuscript globes for Louis XIV of France. These measured fifteen feet in diameter, marking them as the largest globes produced to date. Pleased, the King declared these to be 'not the least of his ornaments' in Versailles. Basking in success - for which he was awarded a fifteen-year privilege - Coronelli issued a printed 3 1/2 foot terrestrial and celestial globe pair for sale to the public. The 1688 globes were the largest printed globes to date, and Coronelli considered them his greatest work in print. He was not without justification. Their superb engraving and encyclopedic geographic detail, not to mention their impressive size, marked them as the finest globes of the 17th century. Desiring to display the quality of these works to a broader audience, and to challenge any potential competition, Coronelli published a 1697 volume variously titled Libro dei Globi or Palestra Litteraria containing his globe gores. (The title page bore a date of 1693, but the earliest known printing of the book was four years later). Coronelli also included most of the gores from his terrestrial globe among conventional maps in his Atlante Veneto and Isolario. The Libro dei Globi presented the gores as completely as possible, resulting in considerable overlap but allowing the gores to be viewed consecutively, highlighting their execution as a single work. The gores were employed in the Atlante Veneto as conventional maps. They accompanied the text of the volume, were not shown consecutively, and were not intended to be viewed as a whole.

In 1686, Coronelli contracted the French engraver Jean Baptiste Nolin to produce an edition of the 3 1/2 foot celestial globe, and several geographical maps. This publication of work through Paris expanded Coronelli's reach as a map publisher and provided the basis for much of his early cartographic output. The terrestrial globe to accompany the celestial was not executed in Paris but in Venice, where Coronelli was able to attract some of the era's finest artists. Augsburg engraver Filipp Kilian provided masterful work on the cartouches. Most of the engraving was assigned to Alessandro della Via, whose work on the Venice edition of the 1688 celestial globe Coronelli declared superior to that of the Nolin. Shirley enthused:

The engraving and design throughout is of the highest standard with neat contrasting lettering and five large cartouches of singular grace and elegance... Coronelli seems to have sought to omit nothing that might be of interest to geographers, navigators, and explorers. There are an unusual number of legends, all explanatory and informative, but which never crowd the space available. Many of the vignettes of ships and fishing scenes throughout the world are worthy of separate reproduction.

Complete sets of these gores are to be found in the British Library and the Library of Congress: they are of extraordinary rarity.

Even at the time of production, globes were prohibitively expensive in comparison with printed books. To compare, the 3 1/2 foot globe pair cost 1240 Venetian Lire in 1697. The first volume of Coronelli's Atlante Veneto was 55.16 Lire. Therefore, in order to reach a broader audience with his globes, and to get better return for the expense of producing the copperplate gores, Coronelli produced his Libro dei Globi which - though still tipping the scales at 310 Lire - would bring the magnificent engraving and detail of his work to those unwilling or unable to afford a globe. It included the gores of all Coronelli's globes - though a buyer hoping to construct the largest of these globes with the gores therein would have been sorely disappointed. The format of the books would not allow for the printing of the full-length gores of the 3 1/2 foot globe, which were therefore printed with portions masked off. Since this process did not change the plates, but merely obscured the parts which were not to be printed, it meant that different parts of the same gore could be chosen for different printings. This becomes significant when addressing the specific source of one or another of these bound gores: those printed in the Libro dei Globi shared consistent latitudes, and thus could be easily arranged consecutively and read as they might be on a globe. The same gores printed in Coronelli's 1697 Isolario did not necessarily share that consistency. For that matter, different copies of the Libro dei Globi itself likely contained different maskings of the same gores. Studies of the book - of which there are but a dozen copies - show them to be made-to-order volumes with great variation in the inclusion of supplemental materials. No two are identical. It should be remembered that none of the books were intended for the production of a globe, or to replace one: As Scianna points out:

If Coronelli really wanted to collect all the prints he used for the gores of his globes in a single book, he would have to realize a volume of 180-184 plates, whereas no copy has that many. The most extensive copy is the one kept in Yale that has 167 plates; therefore even in this copy several plates are omitted.

As alluded to above, Coronelli's Isolario, descrizione geografico-historia saw the mapmaker again employing the terrestrial globe gores - again, not as a representation of a complete globe, but as illustrative maps in a broader geographical text accompanied by conventional maps, views, and diagrams. The plates for the globe were approximately six inches too long to fit the format of his books, so Coronelli had the plates masked off at one end or the other to restrict the printed image to the half-folio sheets, and occasionally even smaller portions for insertion to the text. For most of the gores, Coronelli chose to mask the portions closest to the poles and to have the sheets centered on the tropics. In specific cases, he instead chose to present the areas ending at the Arctic or Antarctic circles, generally when there were features he wished to highlight: Hudson's Bay, for example, or Tierra del Fuego.

The publication of the Libro dei Globi spanned both sides of the printing of the Isolario. A number of these - which seem to date as late as 1705 - bear the title Palestra Litteraria. This translates roughly to 'Literary Gymnasium' but Dr. Helen Wattis rendered it as 'Literary Wrestling Match' to capture the spirit in which the book was produced. Coronelli presented the work as a direct challenge to any cartographer, geographer, or astronomer to 'criticize or to compare with any other globe, the globes of Coronelli.'

The copperplate for this gore was engraved for use in Coronelli's 1688 terrestrial globe. It was later masked off for inclusion in Coronelli's bound volumes. This sheet can be found in both the Libro Dei Globi and the Isolario. Scianna has cataloged only thirteen copies of the full Libro dei Globi in institutional and private collections. Perhaps a dozen examples of the Isolario are cataloged in institutional collections. This example's text conforms typographically to that of the 1696 Tomo II del Atlante Veneto. We see only two examples of the separate gore in institutional collections at Yale and in the Clements Library at the University of Michigan, although the gore has come on the market from time to time.