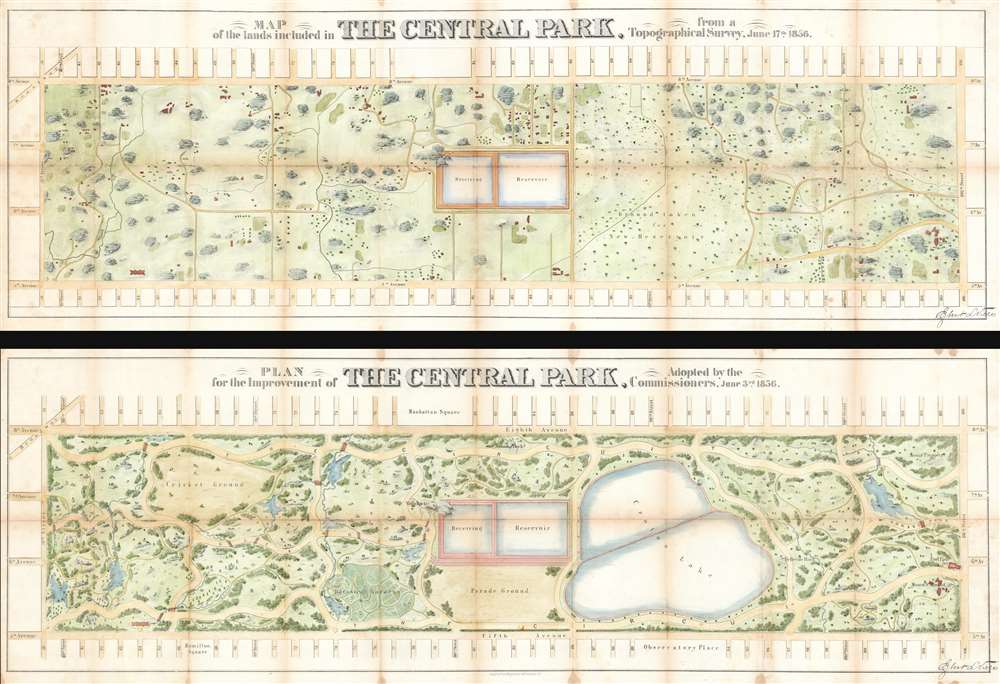 Two extremely rare 1856 pre-Design Competition plans of Central Park drawn by the park project's first engineer-in-Chief Egbert Ludovicus Viele. Both plans extend from 59th street to 106th street, taking in the original grounds reserved for Central Park, as well as some of the adjacent streets and avenues. Viele's printed signature appears in the lower right quadrant of both maps.

The Creation of Central Park

In 1853 the New York State Assembly passed the historic legislation that would lead to the creation of the first planed urban recreation area in the United States - New York City's Central Park. With the grounds for the future park officially delimitated, the years that followed were marked by a struggle between city officials and the 'rapacious occupants of the cabins which deface the ground.' The lands designated for the park were, for the most part, rocky swampland, and were the home of some 1500 disenfranchised individuals: former slaves, poor immigrants, vagrants, and various undesirable businesses such as 'piggeries.'

While the work of acquiring the land and displacing the current residents fell to the City Council and New York Police Department, the work of preparing the grounds fell to the radical civil engineer Egbert Ludovicus Viele. Viele, who was completing a topographical survey of New Jersey under William Kitchell, was assigned to be the first 'engineer-in-chief' of the Central Park Commission. Viele held the radical though not unfounded belief that epidemic level disease evolved from excess moisture in the soil. His topographical experience combined with his passionate advocacy for open public spaces, proper drainage, and clean air, made him the ideal force to define New York City's proposed Central Park.

By 1856, with most of the former inhabitants cleared out, Viele assembled a team to survey and define the future park. He divided the reserved lands into five sections to which he sent separate teams to survey, identifying every standing building, rock, hill, stream, valley, road, and pasture. The result is the upper to the two maps currently offered. This is a topographical survey of the park lands as they appeared just prior to the park's construction. Viele identifies various dwellings, including the African-American community on East 83rd Street known as Seneca Village, the old 'Receiving Reservoir' (currently the Great Lawn), the proposed site of the new reservoir (currently the Old Croton Reservoir), and the Mount St. Vincent Convent - which was subsequently relocated to the Bronx, where it still exists. This important plan, not only enabled Viele to provide the city council with cost estimates for preparing the land, it also served as the basis for all subsequently proposed plans for Central Park, including Viele's own plan, discussed below, and the ultimately victorious Olmsted and Vaux plan.

Seneca Village, which stretched from West 82nd Street to West 89th Street, was a community created within the bounds of what became Central Park by African Americans and Irish and German immigrants. Seneca Village began in 1825 when John and Elizabeth Whitehead, who owned the land in the area, subdivided the land and sold it as 200 lots. The first buyers were African Americans, and by the mid-1850s, Seneca Village had grown into a community of fifty homes, a school, three churches, and two cemeteries. Many of Seneca Village's residents owned their property. In 1821, New York State law stated that, in order to vote, an African American man had to own at least $250 in property and hold residency for at least three years. 100 black New Yorkers were eligible to vote in 1845 under this law, ten of which lived in Seneca Village. With the advent of Central Park, Seneca Village was siezed by the city through eminent domain. The city compensated the landowners, but many complained that their land was undervalued. Unfortunately, very little is known about where the residents of Seneca Village went after they were forced to leave their community.

The second map, the lower of the two illustrated above, is the first actual plan of Central Park. Central Park is famous for the historic 1857 design competition that catapulted Frederick Law Olmsted from a relatively obscure garden designer to the world's best known landscape engineer. However, one year before this contest, Egbert Viele had already produced his own design for the Central Park, what he considered a 'harmonious blending of all that is beautiful in light and shade, in color, size and shape.' He attached the design to his topographical map, both of which accompanied his report to the city council. As the engineer-in-Chief of the Central Park Project, Viele had an enormous impact on the overall design and layout of the park. While Viele's plan of the park is instantly recognizable, a closer examination will reveal that this is not, in fact, the modern Central Park. Nonetheless, this map had a profound influence on most subsequent park designs as it set various legislative directives that all entries to the Central Park Design Competition were required to comply with. These included four or more park transverses, a large parade ground, various children's play areas, a fountain, a skating pond, and a lookout tower, among many other features. Most of these elements made their first appearance on this map by Viele.

Viele's Influence on the Design Competition

There was a staggering amount of work to be done to transform the area into a blend of pastoral and woodland scenery. This involved the design and construction of roadways, tunnels, bridges, arches, stairways, fountains, benches, lamp posts, gates, fences and innumerable other artifacts. It also involved the supervision of an army of about five thousand laborers…Olmsted, to whom most of the credit goes, insisted on seeing the multidimensional project as a single work of art, which he was mandated to create. For this purpose, he ventured to assume to himself the title of ‘artist.'

These maps were created by Egbert Viele and published in the First Annual Report on the Improvement of The Central Park, New York in 1857. Six examples are cataloged in OCLC and are part of the institutional collections at the Brooklyn Historical Society, the New York Public Library, Columbia University, the New York Botanical Garden, Cornell University, and the Library of Michigan.