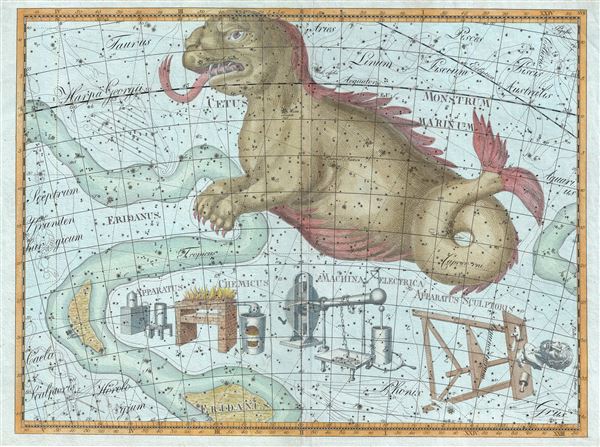 A rare and extraordinary 1801 Johann Elbert Bode elephant folio celestial, constellation, or star map of Cetus (the Sea Monster) or as it is more commonly known, the Whale. Cetus was originally been associated with a whale, which would have had mythic status amongst Mesopotamian cultures. It is often now called the Whale, though it is most strongly associated with Cetus the sea-monster, who was slain by Perseus as he saved the princess Andromeda from Poseidon's wrath. Cetus is located in a region of the sky called 'The Sea' because many water-associated constellations are placed there, including Eridanus, Pisces, Piscis Austrinus, Capricornus, and Aquarius.

Considered the largest and most dramatic celestial maps of their era, possibly ever published, Bode's gigantic star charts detail thousands of stars, nebulae, and clusters. Constellations are dramatically represented in pictorial form, as was the convention of the previous century. May of the newly discovered nebulae, double stars, star and clusters recently discovered by European astronomers such as Lacaille, Lalande, Messier, and Herschel, are identified. Bode presents this map on a conic geocentric projection in which most constellations are seen from the front.

The current example is spectacularly colored with a light dusting of gold so that, from the right angle, the map has an almost imperceptible glitter. Bode's constellation maps are extremely rare with no other example currently on the market. Issued in Berlin in 1801 for publication in Johann Elert Bode's Uranographia.