1867 Weyss Map of the Battlefield of Chancellorsville during the U.S. Civil War 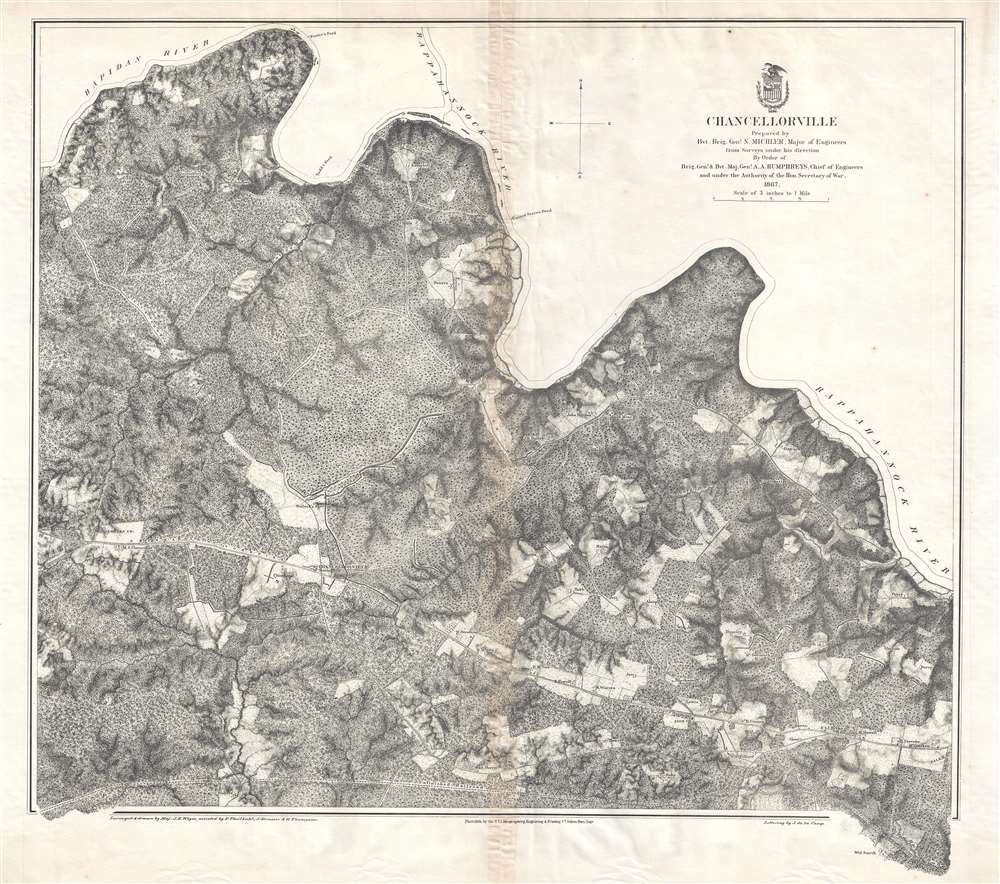 1867 Weyss Map of the Battlefield of Chancellorsville during the U.S. Civil War

The battle where Confederate General 'Stonewall' Jackson was killed by friendly fire.

This is a rare 1867 John Weyss and Nathaniel Michler map of the battlefield of Chancellorsville in Spotsylvania County, Virginia. The map depicts the region from James Taylor's homestead on the Orange Turnpike to the Rappahannock River and from Foster's Ford on the Rapidan River to an unfinished railroad that runs roughly parallel to the Orange Turnpike and Haxel Run. Fortifications are illustrated throughout, although they remain unlabeled, so the viewer is unable to know whether the fortifications are Confederate or Union lines without some prior knowledge. These lines are, most likely, Union Major General Joseph Hooker's defensive lines. Apart from the lack of military notations, the map presents a highly detailed depiction of the region, including numerous homesteads that are identified by the owner's last name, forests, fields, streams, and rivers. The Orange Turnpike nearly divides the region in two, while an unfinished railroad line traverses the map near the bottom border. Chancellorsville itself is situated along the Orange Turnpike in the bottom left quadrant.

The Battle of Chancellorsville

Known as Confederate General Robert E. Lee's 'perfect battle', the Battle of Chancellorsville was fought by General Lee's Army of Northern Virginia and Union Major General Joseph Hooker's Army of the Potomac. Fought between April 30 and May 6, 1863, Chancellorsville was a Confederate victory. Lee's force was half the size of Hooker's, but, in a daring move, Lee split his army in two, so as to distract Union General George Stoneman's cavalry and attack Hooker's main force around Chancellorsville. Both sides suffered horrendous numbers of casualties, numbering over 30,000 between the two sides. Even though Lee managed to defeat a superior force, his victory was mostly hollow due to the death of Lieutenant General Thomas J. 'Stonewall' Jackson due to friendly fire and his inability to prevent the Union withdrawal across the Rappahannock River.

This map was surveyed and drawn by Major John E. Weyss under the command of Nathaniel Michler engraved by Julius Bien, and published by the War Department in Military Maps illustrating the Operations of the Armies of the Potomac and James in 1869. While this map is well represented in institutional collections, it is rare on the private market.