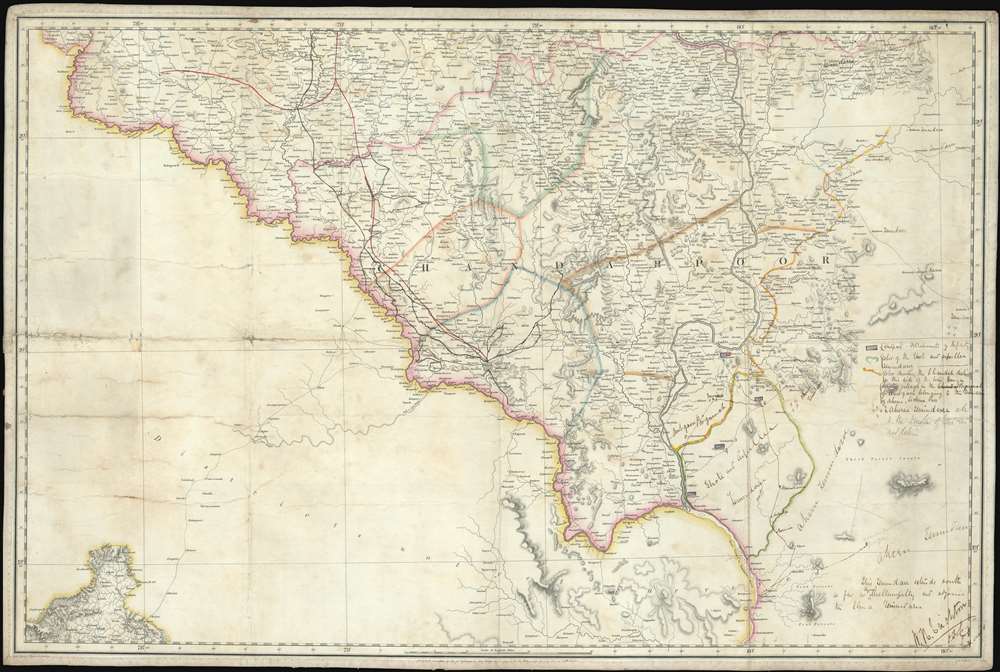 Includes extensive field-annotations relating to action during the Indian Mutiny of 1857.

An extraordinary find, this 1856 map of the Chandrapur (Nagpur Division) is a relic of the Atlas of India, one of the East India Company's most ambitious projects, with unique manuscript annotations associated with the 1857 Indian Rebellion / Indian Mutiny. The map covers the Nagpur Division of Maharashtra, from the intersection of division of the Pranhita into the Wardah and Wainganga Rivers, about 30° N latitude, to about 45°N and from about 77.5° East meridian to about 80° East, including part of Maharashtra and the Deccan Plateau. Extensive annotations describe action under Captain W. H. Crichton relating to the suppression of a regional offshoot of the 1856 Indian Mutiny. As such this map represents unique primary source material for one of the most significant events in Indian history.

Indian Mutiny or Indian Rebellion of 1857

The Indian Rebellion of 1857 was a major uprising of sepoys (generally high-caste Indian soldiers working for the EIC) and local potentates in north-central India against the rule of the British East India Company, a quasi-official private company which functioned as a surrogate for the British Crown. The rebellion was fueled by resentment among the landed classes and nobility over British-style reforms that limited local power and imposed heavy taxes, as well as skepticism related to the implementation of modern technology and military governance. The loosely organized rebellion broke out in Meerut and quickly reached Delhi, where the 81-year-old Mughal ruler, Bahadur Shah Zafar, was declared the Emperor of Hindustan. Fighting soon broke out in North-Western Provinces and Oudh, with most of the action centered on Delhi and Lucknow, both of which were left in ruins. Largely due to lack of sophisticated central organization and a lower quality weapons, the rebellion was suppressed in Gwalior in June of 1858, but some hostilities continued into 1859. The Indian Mutiny is generally considered to be the Frist War of Independence for India. The rebellion caused doubts in England regarding the ability of the EIC to manage the vast territory and led to the Government of India Act in 1858, precipitating the the dissolution of the British East India Company's autonomy in India and the establishment of the British Raj.

Description of the Events noted here in Manuscript

Although this region was not hotbed of the Indian Mutiny, hostilities did eventually erupt and are well documented by British East Indian Company reports and correspondence. The events described here occurred around the 26th of April 1858 - when hostilities became exceptionally violent. We discovered an amazing detailed description of developments related to the Indian Mutiny in a Gazetteer of the Central Provinces, published in Nagpur in 1867,

The swell of the great wave of rebellion which swept over India in 1857- 58 AD was felt in Chanda; and the wild nature of the country, the predatory habits of the Gonds, and the proximity of the Hyderabad territory, combined to render the management of the district during this period a task of peculiar anxiety, but Captain W. H. Crichton, (the then Deputy Commissioner) prevented any out-break, until March 1858 AD when Baboo Rao, a petty Chief of Monumpullee, in the Aheree Zemindary, commenced plundering the Rajgurh Pergunnah, and was shortly afterwards joined by Yenkut Rao, Zemindar of Arpeillee and Ghote. These two leaders then openly declared rebellion; and collecting a mixed force of Rohillas and Gonds, withstood the troops sent against them. On the night of the 29th April, a party of the insurgents attacked Messrs. Gartland, Hall, and Peter - telegraph employees who were encamped near Choonchgoondee on the Pranheeta, - and killed the two first. Mr. Peter escaped into the Aheree keep, and as soon as possible joined Captain Crichton, who was in the vicinity directing operations. Subsequently, when it was desired to communicated with Luchmee Baee, the Zemindarin of Aheree, Mr. Peter disguised himself as a native and safely delivered to her Captain Crichton's letter.

The rebels made a stand at several points, but never with success and at length, by the exertions of Luchmee Baee, Baboo Rao was captured, and was immediately sent in to Chanda, where he suffered death on the 21st October 1858 AD. (Gazetteer of the Central Province, (Nagpore: Chief Commissioner's Office Press), 1867, page5.)

We have also found letters and other documents related to William H. Crichton and his service during the Mutiny. Further history regarding Crichton has been elusive. He was a Lieutenant with the East India Company in 1849, but by 1858, had become a Captain and Deputy Commissioner. His efforts containing the Indian Mutiny in this region were heavily lauded.

The manuscript annotations, written in a hasty hand, potentially under duress, were added by William H. Crichton, then a captain, in 1858. They include both notes and additions to the map itself including references to troop positions, movements, and a more detailed assessment of local polities, including various Zemindar territories. Zemindar were hereditary Indian landowners who ruled as minor kings:An additional note at bottom right reads, 'This Zemindaree extends south as far as Monumpullee and adjoins ???' Crichton's signature also appears in the lower right corner.

The Atlas of India

This rare and little-known publication refers to a collection of maps issued by the British East India Company's chief cartographer John Walker based upon ongoing surveys by Lieutenants Francis Brooke Norris (1801 - 1879) and Charles Thomas Gustavus Weston (1786 - 1828). This was a large-scale work, not to be confused with the smaller format S.D.U.K. Atlas of India, which is loosely based upon it. This Atlas of India survives in only one known example, at the Library of Congress, where it appears to be a composite atlas compiled by the India Office from the Norris / Weston surveys. Separate maps from the atlas do appear in several collections, suggesting that they were more commonly issued as separate pieces. The atlas and the underlying surveys were never full completed - as evidenced her by the blank 'unsurveyed territory' in the lower left quadrants, and plans to complete it were abandoned in favor of other mapping efforts with the 1858 rise of the Raj.

This map was first issued in 1856, as here, by the Cartographer John Walker, engraved by the firm of J. and C. Walker, at the behest of the British East India Company. There is only one other example surviving, part of a composite Atlas of India, in which is plate no. 73, currently held at the Library of Congress (G2280 .G7 1862). Stanford owns an example of this separate map in a alter 1863 edition. None exhibit primary source manuscript material, recording historical events as they were happening, making this map a unique record.

Good. Exhibits some wear, soiling, and damage associated with use on the field of war. Extensive manuscript annotations. Old linen backing.