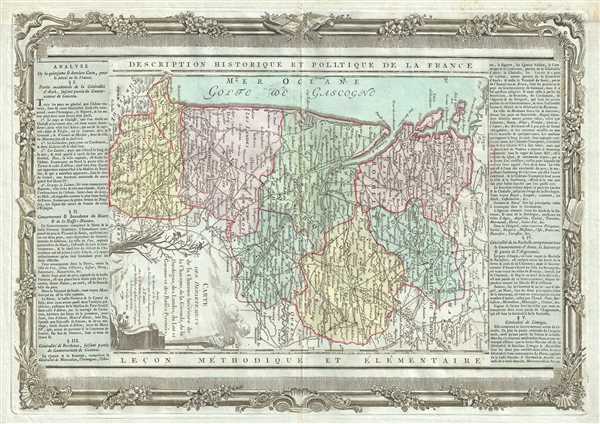 Map depicting the regions producing some of France's finest wines.
$300.00

This is a beautiful 1790 map of the Aquitaine and part of the Poitou-Charentes regions of France by the French cartographer Louis Brion de la Tour. Oriented with north to the right, it covers the French departments of Charente, Charente-Maritime, Gironde, Landes, Dordogne, Lot-et-Garonne, Landes, and Basses-Pyrenees or Pyrenees-Atlantiques. The city of Bordeaux is identified. Color coding divides the map according to region and notes numerous towns, cities, rivers, forests, mountains and other topographical features.

The Bordeaux region is the seat of the Bordeaux wine region and produces many of the world's finest reds. The ancient county of Perigord (An important battlefield of the Hundred Years' War between the English and the French), roughly corresponds to the modern department of Dordogne. This area is best known for its production of Monbazillac, a sweet white wine, and Cabecou, a soft goat cheese. The coastal department of Gironde is known for its remarkable cuisine and is the home to both Fois Gras and Armagnac. Lot-et-Garonne is famous for its production of Buzet wines and Cabecou d'Antan, small round goat cheese with a fine, creamy texture. The Pilgrimage to Santiago de Compostella also passes through the northern part of this region. Landes produces Chalossais, a white cow cheese with a gentle, acidic edge. Tursan wine is also distilled here, along with Armagnac brandy.

The departments of Charente and Charente-Maritime, part of the Poitou-Charentes region which hugs the Loire Valley, is also famed for is beautiful Chateaux and for producing some of the world's finest wines. The department of Charente is known for its fine Cognacs and Pineau wines, agriculture, and cheese. It produces a wide variety of goat cheeses, such as Chabichou, Mothais, Buche du Poitou, and Chabi. In fact, it produces a third of all the goat cheese in France. Charente-Maritime is a coastal province bordering Charente, Dordogne, and Gironde (Bordeaux) is also known as the producer of the world's finest Cognacs.

> A beautifully engraved title cartouche adorns the bottom left quadrant of the map. To the left and right of the map are paste downs of French text with remarks and description of the map. Surrounding the whole is an elaborate decorative border featuring floral arrangements. This map was issued as plate no. 19 in Desnos’ Atlas National de France, bound with the most deluxe edition of his 1786 Atlas General Methodique et Elementaire, Pour l’Etude de la Geographie et de l’Histoire Moderne.